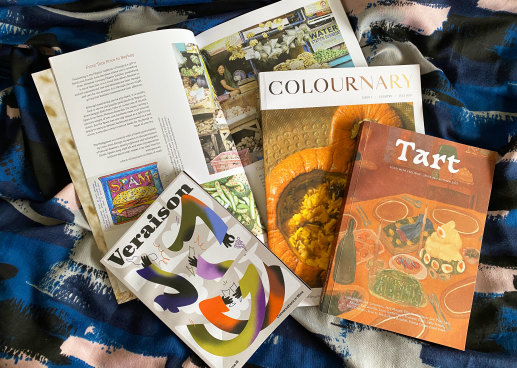 Through DIY publishing, industry outsiders and hospitality staff are covering the food world in their own unique and creative ways. Credit:Lee Tran Lam

Ever seen an Armenian pumpkin dish on a magazine’s cover? Or come across BYO wine tips for a Mongolian chain restaurant? Browsed recipes such as a Venezuelan snack that translates as “break the mattress” or Indigenous falafel made with Warrigal greens? This is the diverse content you’ll find in Australian indie food magazines that emerged during the pandemic, from long-time journalists tired of predictable publishing formats to industry outsiders and hospitality staff who feel unrepresented by what they see in traditional food media.

“I wanted to make a magazine for my friends and I guess my friends didn’t really fit the demographic [of wine mags],” says Moira Tirtha, editor of Veraison, which launched its first edition last year. Instead of dedicating pages to over-expensive wines, Tirtha is inspired by mates who drink booze in plastic cups in parks and compare wine to “smoking a cigarette in the bath after eating a sticky date pudding”.

Tirtha studied wine and was recently sommelier at Melbourne’s acclaimed Mauritian wine bar, Manzé, but this playful approach seemed right for Veraison. “It felt silly and unserious, which made so much sense to me because we were always drinking in these informal social contexts, so I wanted to make something where learning about wine would feel the same way.” 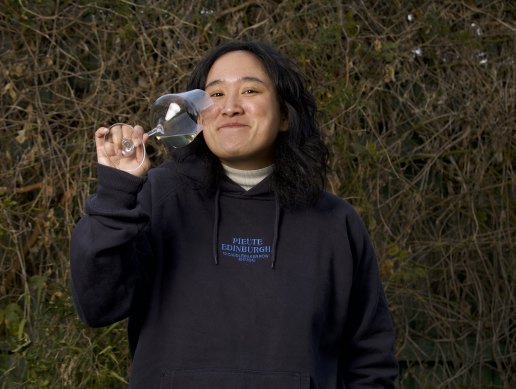 Veraison is inclusive: more likely to cover which wine to bring to a hot pot joint than a pricey French restaurant. It documents the industry’s racism (like being asked which wine goes well with dog) and the reality of suffering from Asian flush when participating in Australia’s drinking culture. “Having other QPOC [queer people of colour] reach out and say they’ve felt seen, were glad to be given a space to express their anger and call for action was really something,” says Tirtha. Veraison hopes to work with First Nations artists to cover wine-making regions next.

With Colournary magazine, Rushani Epa wanted to change how media covered food. “There was a lack of representation,” she says. As a trilingual Sri Lankan Australian, it was frustrating to see Indian restaurants only featured in “cheap eats” stories, or banh mi valued only for its price. Colournary’s pages go beyond the typical pasta and pavlova recipes, with ghapama (an Armenian pumpkin dish) featured on its first cover. The dish is so revered in Armenian culture, a well-known song claims 100 people will turn up when you cook it.

As an indie editor, Epa can feature under-represented cuisines and not worry that a Creole dish with Nigerian roots isn’t “trendy” enough to justify coverage. “The main goal is that we’re diversifying the food media industry,” she says.

Many indie food mags are by people who’ve worked in media – from Eatable (by former Gourmet Traveller staff, Liz Elton and Lisa Featherby) to Tart (by Sasha Aarons and Sasha Gattermayr, who met while at The Design Files) – and Colournary’s first print issue emerged while Epa was food editor at Melbourne’s Time Out.

“I’m really grateful for my experience at Time Out, because I needed that experience,” she says. “[It] also taught me that’s not how I want Colournary to operate – purely because it’s very trend-based, it’s all about clicks. You might put your heart and soul into a piece, but if it doesn’t perform, then it’s ‘bad’, right?” 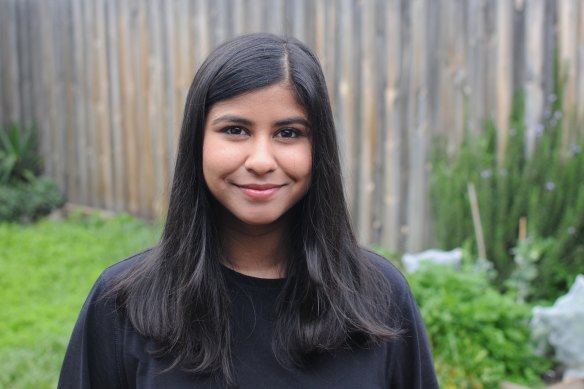 Disillusionment with traditional media also inspired Myffy Rigby’s approach to Swill magazine, which she’s editing for Swillhouse, the hospitality group behind Sydney’s Shady Pines Saloon and Restaurant Hubert. When she announced her involvement on Instagram in February, she asserted the title would have “no trends, no hype, no reviews”.

Her approach is informed by nearly two decades of media experience, including seven years as this masthead’s Good Food Guide editor. After she resigned from that role, Anton Forte from Swillhouse rang to enlist her for his Swill magazine with artist Allie Webb, who is his wife. “Between all of us, we bring something different to the table,” Rigby says.

Their first issue, out October, is hard to pigeonhole. It features artist Plum Cloutman (who does postcard-sized paintings that feature food), recipes using invasive pests, and a profile on the septuagenarian restaurateur behind Melbourne’s France-Soir restaurant. Instead of snappy reviews, Rigby dives into stories with grand 3000-word counts. “We’ve got a story set in Jumbo’s Clown Room in LA, which is probably the world’s last remaining rock and roll bikini bar,” says Rigby. “David Lynch wrote Blue Velvet there.” She jokingly calls this “slow journalism”, the editorial equivalent of “slow food”. 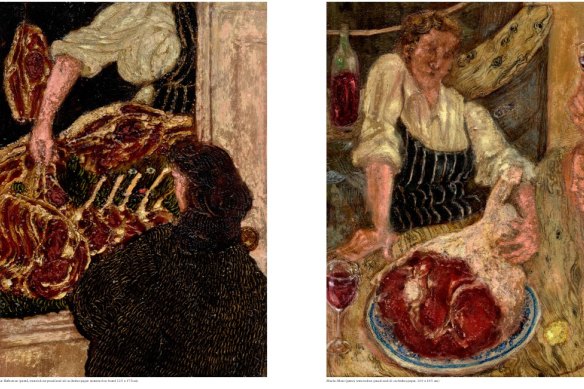 “No trends, no hype, no reviews”: a spread from Swill.

“I think we’re all feeling a bit diabetic with the snackable content, right? I think we all need some whole foods, some chickpeas and brown rice, in our journalism diet,” she says. Swill’s cover, for instance, is a lino-cut of a tableside scene by Webb that could have easily appeared in a museum centuries ago. “There’s nothing newsagent-friendly about this,” says Rigby. “If ever there was an opportunity to change the conversation with indie magazines, I think it’s now.”

Someone who has done that is chef Rosheen Kaul, who started self-publishing The Isol(Asian) Cookbook zines in early 2020 with illustrator friend Joanna Hu when COVID-19 shutdowns left them unemployed. “I was on a mission to teach the very basics of Chinese cooking,” she says. Kaul was drawing on her heritage and experience in Chinese restaurants. She was also reacting to cookbooks by white authors. 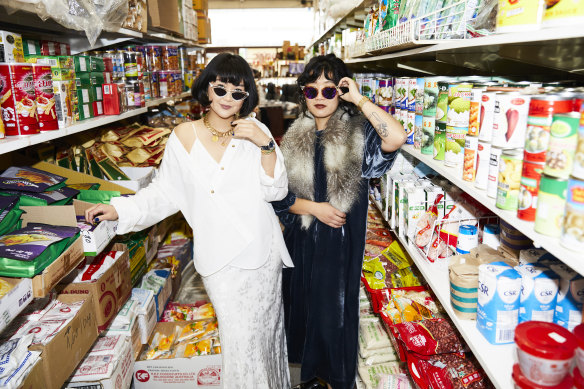 “Seeing the phrase ‘made easy’ on a cookbook with watered-down recipes from a vibrant cuisine – I find very upsetting. Ethnic cuisines don’t need to be ‘made easy’; they are rich, vibrant and delicious as they are, and a window to a culture.” You can make something beginner-friendly without erasing its cultural heritage. You can reflect changing eating habits, too – as she did with her Sichuan sausage sandwiches inspired by Bunnings Warehouse.

“We speculated whether we’d maybe print 20 copies of the first Isol(asian) book, so the response in entirety was extremely memorable and overwhelming,” says Hu. It featured prominently in local and overseas press, scored them readers from Ireland to Malaysia, and an award nomination, too.

“When we were invited to submit a copy to the National e-Deposit for preservation, we were like, ‘This is it. We’ve made it.’ But when the now publishing director of Murdoch, Jane Morrow, contacted us about turning our zines into a 200-page hardcover [book], well, that has been the true highlight,” says Kaul.

Browse their new publication, Chinese-ish, and you’ll see how Hu’s drawing style has become more confident and intricate – although she executed them in the same dress code as The Isol(Asian) Cookbook. “I still did most of the illustrations in my pyjamas to a soundtrack of musical theatre and crime procedurals.”

Producing a published cookbook with professionals (“the legendary photographer Armelle Habib and stylist Lee Blaylock”) means Kaul no longer had to rely on her quarantine-era solo iPhone efforts – such as balancing a Sichuan sausage sandwich with one hand and snapping it in focus with the other. “The spirit and vibrancy of The Isol(Asian) Cookbook remains, on better paper of course, with WAY better photography and styling,” she says. “What’s been particularly exciting is having a few international publishing houses buy the rights to our book. The Dutch and US copies arrived on my doorstep a few days ago.”

Lee Tran Lam is a writer, podcaster and the editor of New Voices on Food.

To read more from Spectrum, visit our page here.