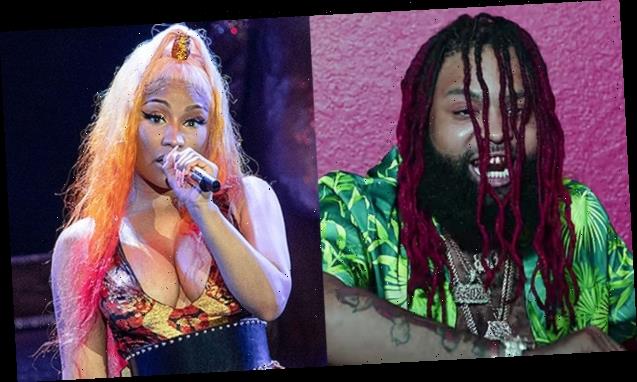 Nicki Minaj took ‘working mom’ to a new level. Just a ‘few days’ before giving birth, Nicki joined underground rap star Sada Baby to write and record a remix of his hit, ‘Whole Lotta Choppas,’ that has taken over TikTok.

While the mainstream may not know the name Sada Baby, they got a major introduction on Oct. 16, thanks to some help from Nicki Minaj. Though Sada’s “Whole Lotta Choppas” has taken off online and on TikTok, Nicki put more eyes and ears on Sada by lending her voice on the song’s remix. This wasn’t a short guest verse, either — Nicki invested a lot of energy into this remix, contributing two whole verses and her own take on the chorus that has inspired more than 6.9 million videos on TikTok.

Dubbed “rap’s most prolific and unpredictable new star,” Sada Baby (born Casada Sorrell and raised on Detroit’s east side) has blessed 2020 with a ton of new music. In addition to the handfuls of singles, he also released a pair of full-length projects — Skuba Sada 2 and Bartier Bounty 2. “My effort is different,” he told Billboard in April. “My range is different. You’ll be able to feel my music. I’m going to move your body, make you feel good, get you through some s–t. I’m something special. Before we drop the debut album, I’m doing another mixtape because I want to warm my fans up one more time and just give them a preview of what’s to come. The mixtape is so strong, they’re gonna wonder why it’s not the album.”

Sada released the video for the original “Whole Lotta Choppas” in August, and it’s racked up over seven million views. The track also found success on TikTok, where over 6.9 million videos have been made with the song as the soundtrack (as we mentioned earlier). Nice.

While this may be the year that Sada Baby establishes himself as a mainstream sensation, it appears 2020 is the year that Nicki reestablishes her reputation as the in-demand featured rapper. “Whole Lotta Choppas” marks Nicki’s seventh guest appearance of 2020, and it won’t likely be her last. She first jumped on Megan Trainor’s “Nice To Meet Ya” at the start of the year, before partnering with Doja Cat for a chart-topping remix of “Say So.” She also had a number one with 6ix9ine’s “Trollz.” Nicki’s song with ASAP Ferg, however, didn’t do so well. “Move Ya Hips” hit No. 19, much to the aggravation of the Barbz who were hoping for another No. 1 for Nicki. After that, Nicki teamed with Ty Dolla Sign for “Expensive,” with Mr. Eazi and Major Lazer for “Oh My Gawd,” and now, she’s on this track with Sada.

Nicki reportedly teamed up with NBA Youngboy for a project, per Revolt. The rapper posted a few shots from what looked to be a futuristic-themed music video. The since-deleted-photos showed Nicki dressed in green while showing her then-pregnant belly. “What that speed about?” Youngboy captioned the post. It’s possible that Yongboy wasn’t speedy enough. Since sharing these clips, Nicki has reportedly given birth to her and Kenneth Petty’s first child. She supposedly welcomed a son on Sept. 30, but so far, Nicki hasn’t publicly confirmed or denied that. Some fans think she gave birth earlier than that, after her mother, Carol Minaj, left an Instagram comment that read “motherhood already looks beautiful on you.”