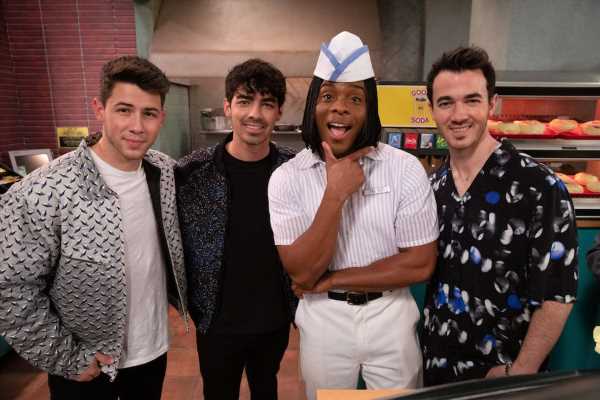 Get set for some vital information. The cast of Nickelodeon’s All That reboot has finally been revealed, and, per a press release, it includes "a talented and diverse group of comedians who reflect the spirit and humor of today’s generation of kids." In addition to big laughs, viewers can also expect to see the new cast do everything from celebrity impressions, to portraying original characters inspired by their own lives, in addition to tackling some physical comedy sketches, too, of course.

Ranging in age from 12-15, each kid "brings their own unique comedic skill to the show," Nick further promised. Ready to meet the new crew? The seven new All That stars include:

The network first announced they were reviving All That, the iconic sketch comedy series that ran for 10 seasons from 1994 to 2005, back in February. Naturally, ’90s kids couldn’t have been more hyped (or overcome with nostalgia), especially given the fact that original cast members and Good Burger‘s Kenan Thompson and Kel Mitchell (AKA Kenan and Kel) were executive producing the new series, which premieres on Saturday, June 15.

And if that wasn’t enough to get everyone humming the famous All That theme song, which, of course, was sung by TLC, Nick further revealed that Mitchell would also appear in the All That premiere episode, alongside fellow OG castmates Josh Server and Lori Beth Denberg, who will reprise her popular character, Ms. Hushbaum, the hypocritical “Loud Librarian.”

But Nick still wasn’t done with the gift giving. In addition to all the aforementioned exciting news, they also announced that Jonas Brothers will perform "Sucker" on the June 15 episode, as the series reboot’s very first musical guest. (During All That‘s original run, musicians like Aaliyah, Usher, Justin Timberlake, and Britney Spears were among the TV show’s superstar performers.)

"Ready yet? Get set… we’re on the premiere of the all new #AllThat on June 15th! @nickelodeon ???" the JoBros tweeted from their official account on May 14, along with a short video. Mitchell even made an epic came in the clip as his "Good Burger" character, Ed.

Per Nickelodeon, Daddy Yankee, Ally Brooke and Kane Brown will also all perform on All That this season, with "surprise guests from the worlds of TV, film, comedy and more" also making appearances. (No word yet on whether or not All That alums Amanda Bynes or Nick Cannon will participate in any capacity.)

“For us to see the new kids going through what we went through and experiencing the beginning and know what’s to come for them — it’s so cool to see their faces experiencing it all,” Mitchell recently told People. “I’m excited that I’m there to give advice. God made me ready for this.”

The new All That cast certainly couldn’t ask for a better mentor.