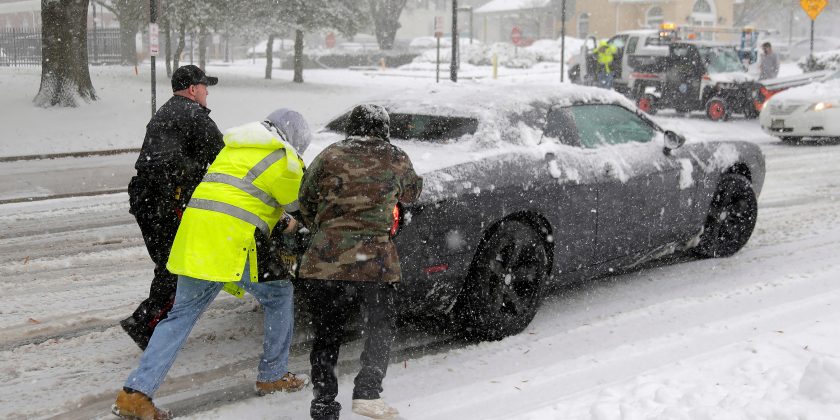 A strong snowstorm wreaked havoc on the northeast on Thursday, claiming at least eight lives across several states and leaving thousands without power, according to reports.

The storm brought strong winds, rain and ice and left more than 400,000 customers in 17 states — from Kentucky to Maine — without power due in part to freezing rain, according to CNN. The storm initially hit Thursday, delaying commutes, prompting school closures, and causing a string of motor accidents, WESH reported.

On Thursday night, a 61-year-old New Providence woman, Susan Brown, was struck and killed by a New Jersey Transit train around 6 p.m. when the car she was driving likely slid onto the tracks, according to NJ.com.

“It’s very possible she got stuck,” Morgan told NJ.com. “(The snow) was brutal. It came out of nowhere and we had traffic backed up everywhere.”

Morgan attributed the death to the weather in his Facebook post, writing, “We tragically lost one of our own yesterday to this storm.”

“The roads are treacherous and it is slick and dangerous out there despite our best efforts, so please refrain from unnecessary travel, and if you have to be out there, please be slow and careful,” he continued in the post. “As completely frustrating, aggravating, disruptive, and inconvenient this has all been, please be patient, and continue to be good to one another, and help each other out.”

Although the winter storm began plaguing parts of the northeast on Thursday, states as far as Mississippi were feeling the effects on Wednesday. Two people died and several people were injured that day in Mississippi when a bus traveling from Huntsville, Alabama, to Tunica, Mississippi, flipped on an interstate, according to WHNT.

Meanwhile, Arkansas Highway Patrol officials said three people died after drivers lost control of vehicles on the ice-filled roads, according to CNN. One person was killed in Maryland on Thursday and another in Ohio, CNN reported.

“It was a whopper and we were walloped,” New Providence, New Jersey, mayor Al Morgan wrote in a Facebook post on Friday. “No one could have predicted the devastating impact of this horrendous nor’easter on us as it seemed to come out of no where.”

As the storm prompted school closures, Liberty Middle School students were forced to stay overnight at the West Orange school on Thursday due to the weather conditions. School officials shared photos of the students on Twitter, showing the children making the most of their time at the school, watching movies, playing games and eating ice cream.

In their last update, officials tweeted: “8:30 am and final UPDATE…..6 students left with rides for most on the way…HUGE SHOUTOUT TO LIBERTY STAFF FOR A JOB EXTREMELY WELL DONE…LOVE

my Liberty family…several staff were released prior to our group photo….”