“It was the best of times, it was the worst of times,” wrote Charles Dickens in the opening line of A Tale of Two Cities. Dickens was fanning the flames of the French Revolution but could’ve easily been foreshadowing the events of Netflix’s latest offering, The Chair.

The show opens with Dr Ji-Yoon Kim (Sandra Oh), the new chair of the English department at Pembroke University, strolling through a suitably prestigious looking campus. Ji-Yoon is the first female and the first person of colour to occupy the position, a uniquely modern triumph – the best of times indeed. But the glory is short-lived: kicking back in her chair, the seat buckles, and Ji-Yoon falls flat on her face. Cue: the worst of times. 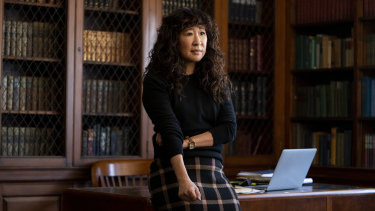 Sandra Oh is the head of the English Department at a minor Ivy League college in The Chair.Credit:Eliza Morse/Netflix

The broken chair metaphor sets the tone for the remainder of the series: Ji-Yoon has inherited a fractured department and nothing will come easy.

Created by Amanda Peet and Annie Julia Wyman, and executive produced by Game of Thrones creators David Benioff and D. B. Weiss, the show packs a lot into a busy six episodes. So now that schools out (as in, I binged all six episodes back to back), what did we learn from the first season of The Chair?

As Dr Cristina Yang in Grey’s Anatomy, Oh was a team player in a solid ensemble. In Killing Eve, she squared off against Jodie Comer, two heavyweights going toe to toe. But as Ji-Yoon in The Chair, Oh shines in a way we haven’t seen before. 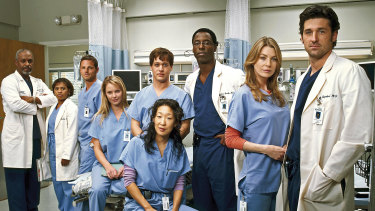 Sandra Oh as part of the ensemble cast in the 2005 season of Grey’s Anatomy.

The role is chaotic, with every part of Ji-Yoon’s life seemingly in disarray. At work, she faces the sobering reality of being careful what you wish for. Leading a cash-strapped department burdened with dead weight, it becomes Ji-Yoon’s responsibility to clean house. “I feel like someone handed me a ticking time bomb because they wanted to make sure a woman was holding it when it explodes,” she quips.

But it’s in The Chair’s tricky mother-daughter relationship that Oh does her best work, cutting through the frustration of single parenting with well-timed one-liners.

Adopted daughter Ju Ju (Everly Carganilla) is confused about her Mexican roots and takes it out on her mother. “You don’t know anything about my heritage, puta!” spits Ju Ju. Not missing a beat, Ji-Yoon claps right back: “The reason you know the word ‘puta’ is because I’m paying for Spanish lessons.”

Oh’s comedic chops ensure Ji-Yoon’s bravado is believable, and as the problems pile up, the funnier Ji-Yoon becomes. In a year full of strong female roles on screen (we see you, Winslet, you too, Jean Smart), Oh has eclipsed them all.

Cancel culture is having a TV moment

To even type the words ‘cancel culture’ is to summon the wrath of those in the comments section, but the concept is as pervasive as it is divisive, and The Chair is the latest show to confront the issue.

In Hacks on Stan*, millennial comedian Ava (Hannah Einbinder) finds herself out of work after a bad-taste tweet about a US Senator. In ABC’s new comedy All My Friends Are Racist, cancel culture is front and centre with Indigenous flatmates Casey and Belle getting cancelled after it’s revealed they’ve been documenting their white friends’ most offensive moments.

In The Chair, Ji-Yoon’s brilliant-but-flawed love interest Bill (Jay Duplass), a fellow professor, is filmed in class performing a Hitler salute to illustrate a point about fascism. The clip goes viral, and by the time the student body gets involved, we’re knee-deep in free speech debate. Try as you might to cancel cancel culture; it doesn’t seem to be going away.

But the moment is over for white men

While there are plenty of white men kicking around Pembroke, they never manage to hijack the narrative. If anything, they are reduced to forlorn figures, forced to come to terms with their obsolescence. Take ageing Professor Elliot Rentz (Bob Balaban), dealing with dwindling class numbers and a bout of adult bed-wetting. “I used to bestride the world like Colossus,” he complains. “Well, now you’re going to bestride it in Tranquility Briefs,” his wife replies. 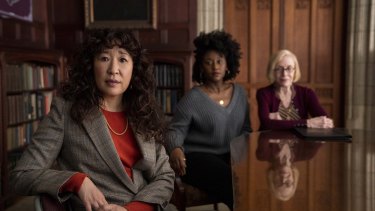 Oh, Nana Mensah and Holland Taylor in a scene from The Chair.Credit:AP

It’s a theme that has become more visible with TV’s class of 2021. The White Lotus was purposefully white, but the men appeared on the periphery, frustrated and futile. In Amazon Prime’s latest, Kevin Can Go F–k Himself, titular Kevin (Eric Petersen) is nothing more than a punchline on the sideline. It’s his wife Allison (Annie Murphy) who’s the dark soul of the show.

While there are lessons aplenty to be learned from The Chair, the biggest take-home is this: even in the worst of times, the best television can be a welcome distraction.