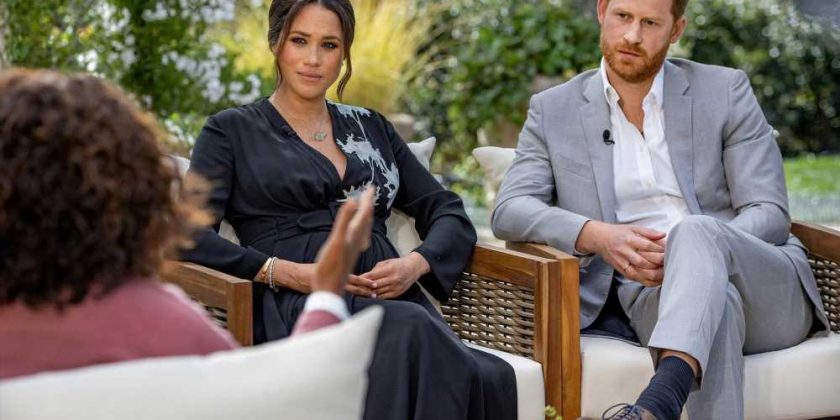 Yes, kids do need dads and other commentary

Admiral grilled by House GOP on ‘woke’ military, insists ‘we are not weak’

A professor at the Naval War College in Rhode Island delivered a lecture to sailors claiming that systemic racism is “in some ways” rooted in classical liberalism, and that a “focus on the individual” perpetuates it — citing Meghan Markle’s interview with Oprah Winfrey in her remarks at the military institution.

Pauline Shanks Kaurin opened her remarks, now available on the U.S. Naval War College channel on YouTube, by telling her virtual audience that “this is not going to be a lecture about the empirical facts of issues of race and gender inequity in this country” and teased that she would be featuring “a quote from the Duchess of Sussex for later.”

“If you’ve been watching CNN, or anything on TV in the last couple of days, you know what I’m talking about,” the professor said in the lecture delivered in March. “If you don’t you should seek that out.”

The lecture was given two days after Markle and her husband, Prince Harry, sat down with Oprah Winfrey for a bombshell interview in which Markle alleged that a senior royal had raised “concerns” about the skin color of the couple’s son Archie.

In an email to the Post Friday, Shanks Kaurin defended using the duchess as a point of reference.

“I cited her because she had been in the news and her quote related to a point in my lecture,” she wrote. “I did not cite her as an academic authority; this lecture was for our Spouses lecture series and therefore aimed at a general audience.”

The lecture was part of the Issues in National Security Series, which the Naval War College says “are specifically designed to offer scholarly lectures to the spouses, partners and significant others of our students; military/civilian employees assigned to the Naval War College and Naval Station Newport and its tenant activities; NWC Foundation members; and local-area retirees or active/reserve personnel.”

Later in her remarks, Shanks Kaurin stated that racism “is not a case of a few bad apples. This is, as the Duchess of Sussex said, she said, racism, racist is not rude. They’re different things. That’s a paraphrase, I don’t have her exact quote. (The actual quote is “rude and racist are not the same.”)

In fact, the professor added, “this is a conversation about systemic and structural disadvantages that have a history, and that are intentional, and in some ways are rooted in this tradition of political liberalism, where we focus on the individual, which is very nice because it gets us out of having conversations about systems.”

Shanks Kaurin, who holds the Admiral James B. Stockdale Chair in Professional Military Ethics at the Naval War College, also took pains to point out what she described as her various privileges.

“I also want to honor that — I’m in my dining room — the land I sit on is native land,” the professor continued. “The land I was born on in Cheyenne, Wyoming is native land. The land I grew up in, in Great Falls, Montana is native land. One of my sons is descended from enslaved persons. My other son is sort of, his family’s from Mexico and he was born in California, which was part of Mexico. So all of these are part of the identity that I hold and the way in which I have to approach this topic which is with some empathy, but also a great deal of humility.”

“My oldest son is Latino, but if you saw him on the street, you might not know that because he is he is rarely light skinned and, and often, as they say, passed [as white],” she added.

The lecture was given amid a nationwide debate about the teaching of critical race theory, which argues that racism — usually anti-black racism — is at the root of American systems, institutions, and individual social interactions. Former President Donald Trump banned critical race theory training in the federal government last year, an order that was rescinded by President Biden after he took office in January.

“That was gonna be an interesting test of academic freedom, because I did critical race theory as part of what I do academically,” Shanks Kaurin told an audience member. “So, that could have been really interesting.”

The professor wrapped up the lecture by recounting a harrowing conversation with her son about the video of George Floyd’s murder at the hands of former Minneapolis police officer Derek Chauvin.

“I said, ‘Did you see the video?’ and he said, ‘Yeah, I saw the video.’ And he looked at me and he said, ‘You realize that they’re gonna kill me one day too, right?’ And I said, ‘No,’ and he’s like, ‘Yeah, mom.’ So that was a really, like, slam my face into the brick wall, right? I’m someone who teaches and thinks about this, and I had to sit down and then have a conversation, a very difficult conversation with my son about that and what it meant, and I couldn’t just say to him as a mother, ‘Oh, maybe that’s not what’s gonna happen,’ because I would have been lying to him.”

Shanks Kaurin told the Post the feedback from her remarks had been “good.”

“Some people felt heard. Some respectfully disagreed. Others said they appreciated my even-handed approach and said they learned something,” she said. “As an academic, my job is to educate about all kinds of views. Only my published scholarship represents my personal academic views on race and gender.”