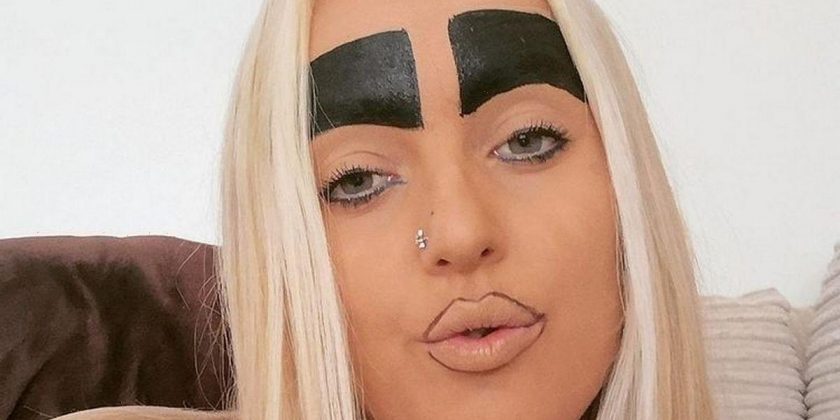 A woman has been told she is not fit to be a mum because she has "Britain’s biggest eyebrows".

Sammie-Jo Hailford, from Grimsby, has massive brows that she has painted on for almost a year.

The 27-year-old has since been trolled online and laughed at in the street – but she insists ‘bigger the brow, bigger the boy’.

Speaking exclusively to the Daily Star, the mum-of-two said: “People have said I shouldn’t be a mum and they are going to ring social services because of my eyebrows. It gets really extreme on the internet.

“They can call social services because I have nothing to hide. My eyebrows don’t determine whether I’m a good mother or not.”

The full-time mum started using liquid liner to make her brows bigger one year ago.

Explaining why, Sammie-Jo said: “I’m not a massive fan of beauty standards today.

“I feel like people are socially conditioned to only be beautiful if they are part of these standards and I just don’t agree with it and I don’t like it.

“I just like to make a statement and the brows do that for me. They started off normal size and they just got bigger over time and I just like to look different.

"It would be cool if they were Britain’s biggest eyebrows.

“I’ve now created a hashtag called 'bigger the brow bigger, the boy' because it’s true and that’s what I say to my friends.”

Sammie-Jo was recently convinced by her pals to join TikTok – where she has acquired more than 75,000 followers in just four weeks.

And despite some cruel comments, she said her eye-popping look has attracted attention from men.

She said: “People say I don’t get boys because I have big eyebrows but that is wrong.

“I have had quite a few men in my inbox telling me I’m beautiful and saying they would date me.

“They always mention the eyebrows first, so maybe there is a fetish there.”

Strangers now approach her in public to ask about the eyebrows that take up most of her forehead.

Most people are polite, but she added: “Younger girls will laugh at me in the street, I’ve had that a couple of times but they do it between themselves.

“The worst comments are online. I get horrible comments about my makeup and they also take the mick out of my teeth too.”

Despite the trolling, Sammie-Jo is striving to use her platform to encourage people to be who they want to be.

She said: “I’ve not had the best life before now and I’ve suffered a lot of trauma and abuse from people.

“I guess the past three years I have found myself and I went through therapy to realise I am worthy no matter how I look or what I decide to do."

The mum added: “Trolling doesn’t affect me now. I’m trying to raise awareness to the fact that people can be different.

“That’s how I fight them back.”