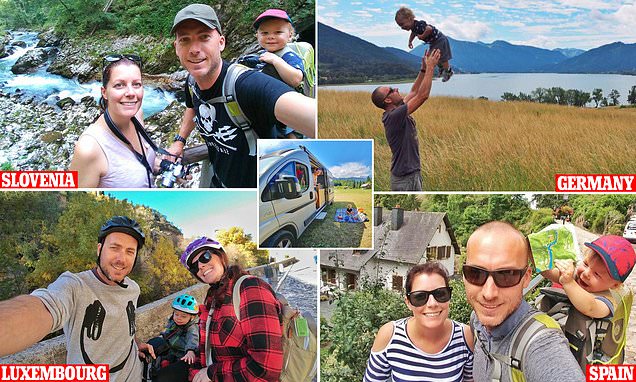 A mother who ditched the rat race to travel with her toddler has revealed how the business idea she cooked up on the road in a camper van has now earned her more than double her previous salary.

Jennifer Constant, 33, from Bristol, along with her husband Terry, 37, and son Ethan, three, sold their £310,000 four bedroom home back in 2016 to travel around Europe in a motor home.

Finding her work as an associate director of fundraising left little space for family time with her logistics worker husband and son and Jennifer was keen to change her life.

Inspired by her new life on the open road, Jennifer launched a digital marketing agency for wedding professionals – Jennifer Claire Media – which, along with her three other businesses is now set to hit a six figure turnover and has more than doubled her previous salary. 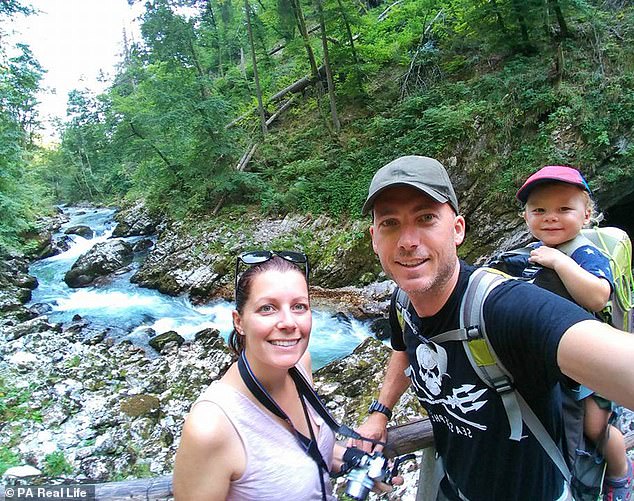 Jennifer, 33, Terry, 37, and three-year-old Ethan in Slovenia after selling their house in Bristol to travel around Europe in a camper van

‘Sometimes I have to look back and pinch myself. I can’t believe what an amazing adventure this has all been.

‘We have faced a little criticism, with people saying we’d come home broke or burn through our savings, so I was determined to make my business a success.

The entrepreneur is currently juggling house-sitting with staying with friends and family and has not paid rent for two years. 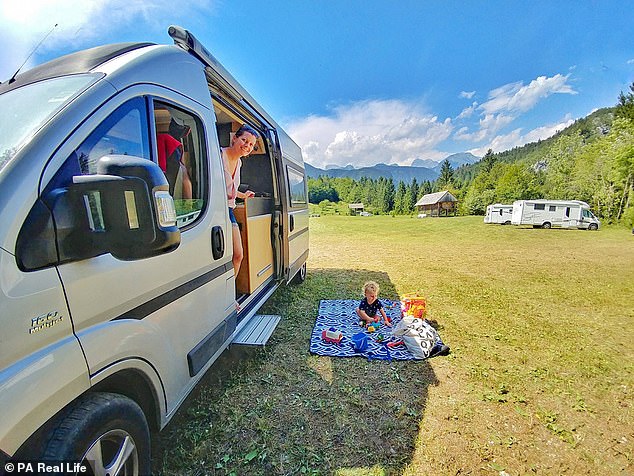 The family did ‘wild camping’, stopping anywhere they liked rather than sticking to ready-made sites. Pictured: Jennifer with her son Ethan in Slovenia 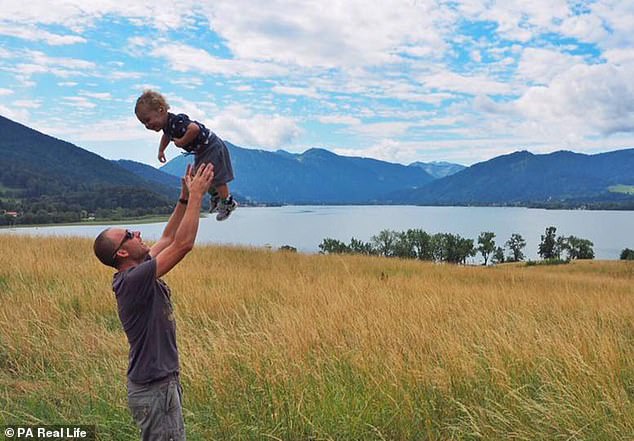 The free-spirited family started blogging about their adventures as they went at Travel As They Grow, which amassed two and a half thousand followers. Pictured: Terry with Ethan in Germany

After meeting as students at the University of Portsmouth in 2003, Jennifer and Terry bonded over their love of travel – embarking on a huge backpacking adventure around 36 countries when they graduated.

Once back in the UK, they married and settled into their respective jobs, working hard to save for a house.

‘We both worked really long hours,’ said Jennifer. ‘I’d be up and down on trains from Bristol to London every week and Terry was out most of the day.

‘Everything changed when we had Ethan in November 2015, though. We weren’t single people anymore. We were a family.’ 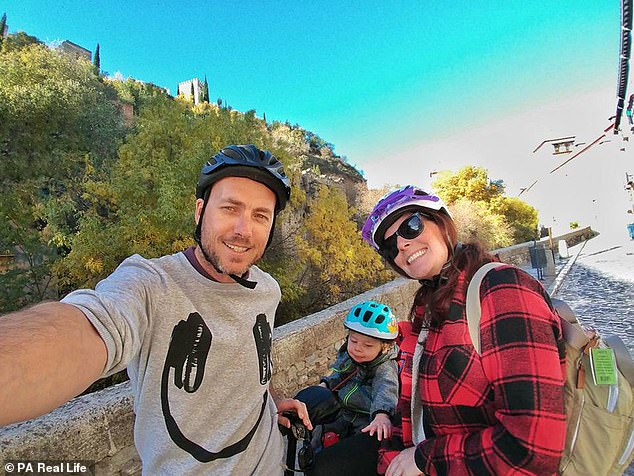 Jennifer, Terry and Ethan, who was then just one, began in Spain (pictured), before travelling through Portugal, France, Belgium, Luxembourg, Germany, Austria, Slovenia and Italy 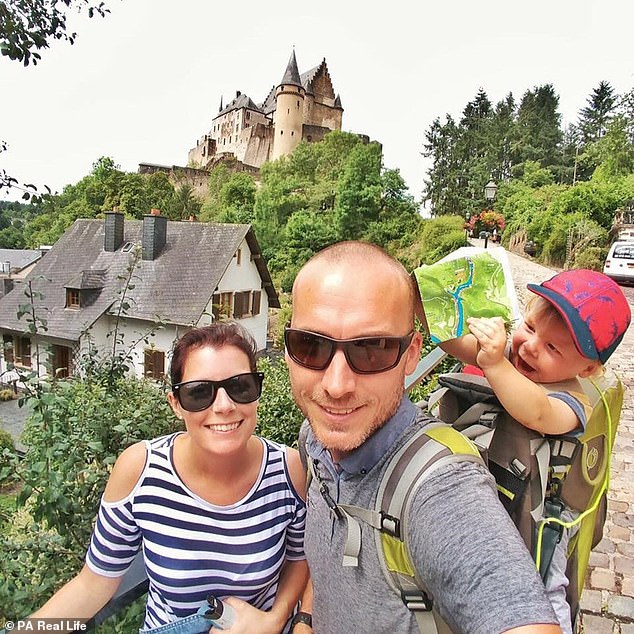 Sharing snapshots online, the Bristol family, here in Luxembourg, are constantly flooded with messages from other families, keen to step escape the rat race 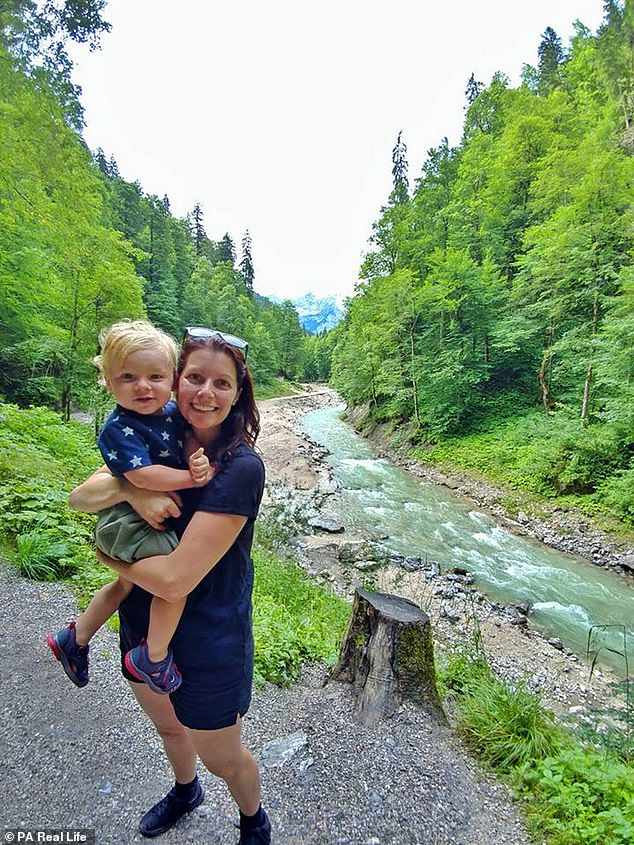 Inspired by her new life on the open road, Jennifer launched a digital marketing agency for wedding professionals – Jennifer Claire Media – which, along with her three other businesses is now set to hit a six figure turnover and has more than doubled her previous salary. Pictured: Jennifer in Germany with Ethan 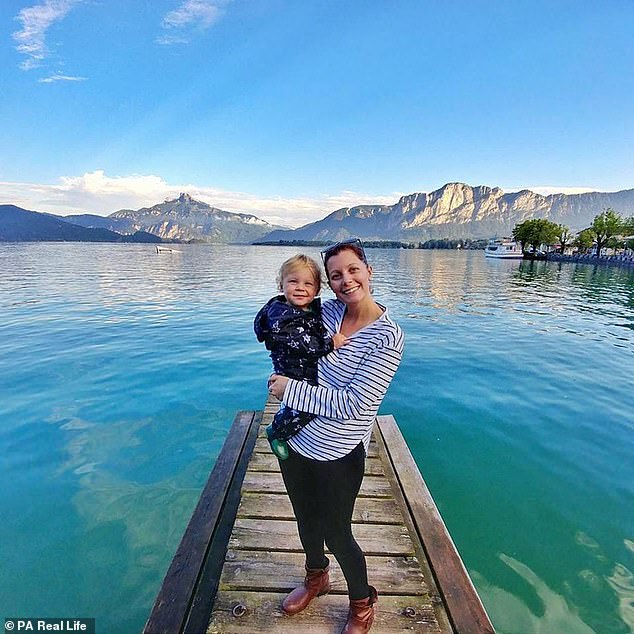 Having previously worked as a celebrant – someone who performs a ceremony – Jennifer’s first venture was to set up The Celebrant Directory – a one-stop shop for ideas, inspiration and information about celebrants. Pictured: The mother with her son in Austria

Jennifer took maternity leave when Ethan was born, but could not go back to work on a part-time basis, so found she had to pay hefty nursery fees once she and Terry were back in full-time employment.

‘We were paying almost £1,000 a month in fees, and Ethan was in nursery from 8am to 6pm, which was just horrible.

‘From the outside, our lives were perfect. We had great jobs, a beautiful house and lived in a really cool city – but inwardly, something just wasn’t working.

‘We were barely seeing each other, and it felt like we worked and worked just to pay the bills.

Spurred on by the Brexit referendum to scope out potential places in Europe to one day live, Terry and Jennifer decided ‘virtually overnight’ to completely transform their lives.

Putting their house on the market, they sold it almost immediately, swapping it for a motorhome they bought at a convention in Norfolk. 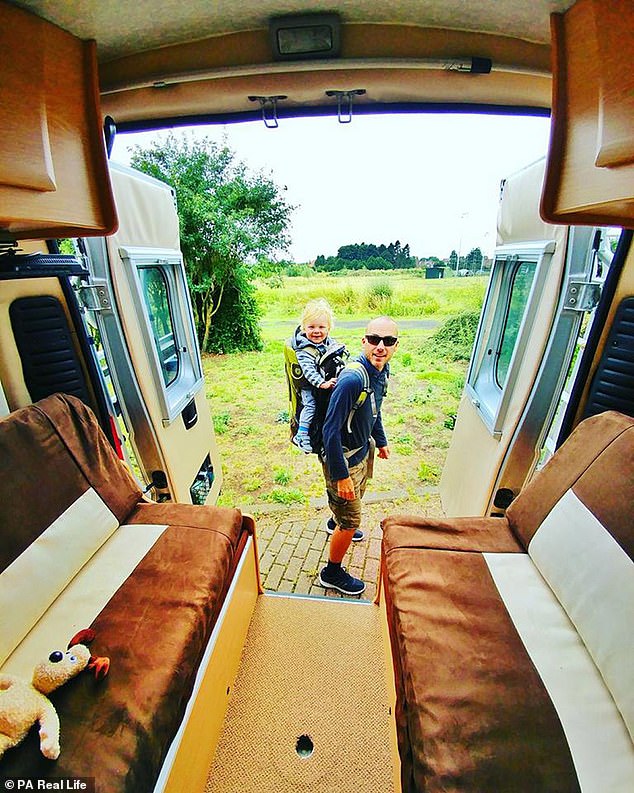 The couple were intially spurred on to take the trip following the Brexit referendum and hoped to find a place in Europe to live. Pictured: Terry and Ethan by their camper van

‘Though we took a lot with us on our travels, we sold a great deal of possessions too – basically everything except keepsakes and memorabilia,’ Jennifer continued.

‘The way we looked at it, it was just stuff. We could re-buy anything we missed as we went.’

Hitting the road in January 2017, Jennifer, Terry and Ethan, who was then just one, began in Spain, before travelling through Portugal, France, Belgium, Luxembourg, Germany, Austria, Slovenia and Italy.

Mostly ‘wild camping’ – stopping anywhere they liked the look of rather than sticking to ready-made sites – they were spending around £600 a month on petrol and food.

While it was far less than they had needed to live in a house, Jennifer still worried about blowing all their savings, so began thinking of ways she could use her skills to become an entrepreneur and start her own business. 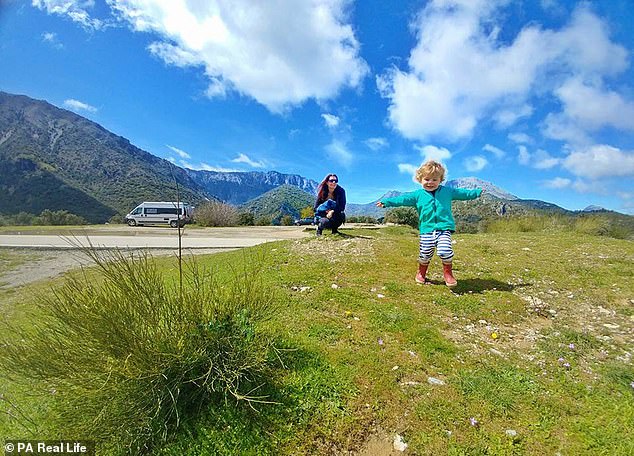 The couple admit that they have received some flack from people who told them they would come back ‘broke’. Pictured: Jennifer and Ethan in  Spain 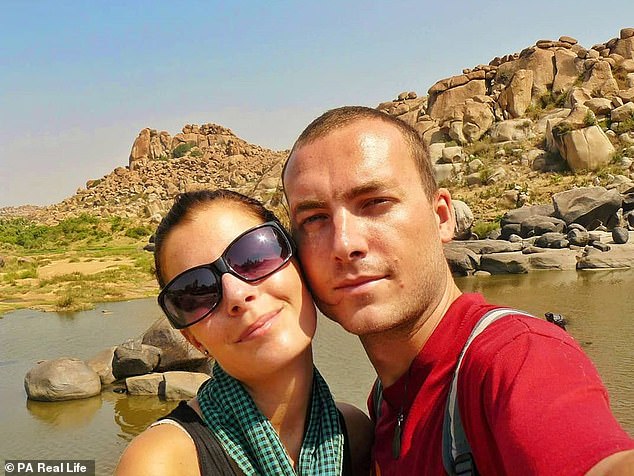 After meeting as students at the University of Portsmouth in 2003, Jennifer and Terry embarked on a huge backpacking adventure around 36 countries when they graduated. Pictured during their backpacking holiday

Having previously worked as a celebrant – someone who performs a ceremony – her first venture was to set up The Celebrant Directory.

The idea was for it to be a one-stop shop for ideas, inspiration and information about celebrants available to perform various different types of ceremony.

‘There was nothing out there that was dedicated to marketing celebrants and helping people get a really personalised ceremony,’ she said. ‘I pretty much founded The Celebrant Directory in libraries across Europe, as we travelled.’

Successful enough to secure the family a steady stream of income, Jennifer then moved on to launching an entire digital marketing agency.

Using WiFi where available, internet cafes, libraries and a dongle she bought to provide internet to the van, she worked on her business venture in the evenings while Ethan slept, before taking off for another day of adventure in the morning.

‘I still wanted to have adventures and not to get too bogged down by work,’ she said. ‘Van life doesn’t always make things easy, though.

‘I remember once I blew my Mac charger, so had to get one posted to an Air B&B and go and pick it up, as there was no other way of getting it to us while we were on the road.’

As well as wild camping, the free-spirited family also started house-sitting, blogging about their adventures as they went at Travel As They Grow, which amassed two and a half thousand followers.

Jennifer added: ‘I’d recommend anybody do it, as an amazing way of travelling for free.

‘We stayed in incredible places. Last Christmas was spent in a nine-bedroom old-fashioned mill with a swimming pool. Other houses we’ve stayed at have had loads of animals, which was fantastic for Ethan.’ 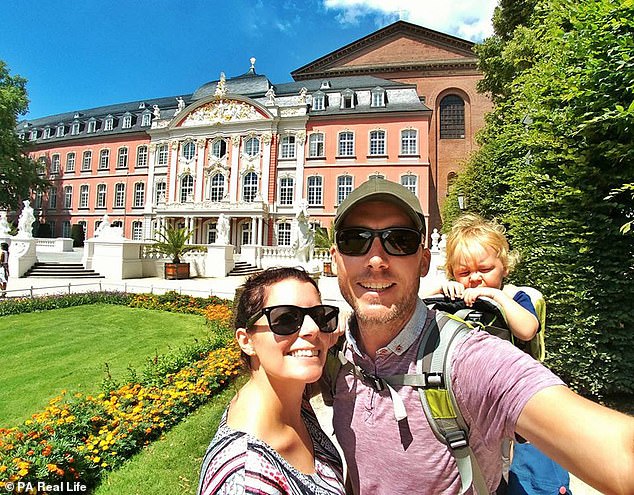 The family (pictured in Trier, Germany), who have driven 30,000 miles to date, are due to continue their travels in the new year, when they’ll head off to Sri Lanka for six weeks 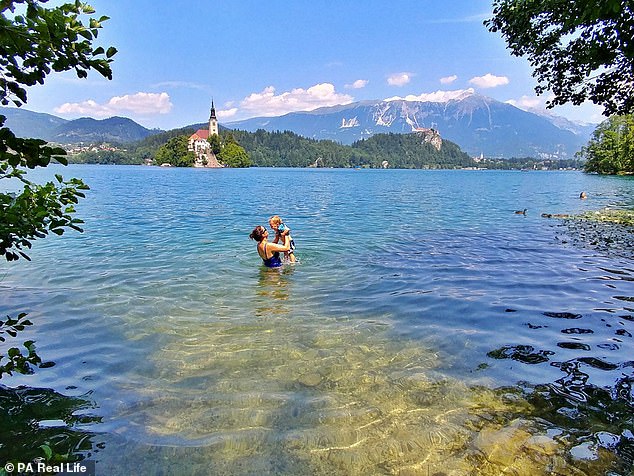 They are looking at starting a new life in Spain once they have finished their travels. Pictured: Jennifer and Ethan in Lake Bled, Slovenia

‘We’re often asked what the point in taking Ethan travelling while he’s too young to remember is – but we remember and that’s important, too.

‘We remember him taking his first steps in Portugal and saying his first word – ‘wow’ – as he looked at a sand dune in France.’

Arriving back in the UK this summer, despite having no permanent home, Jennifer has since set up another arm of her company, which involves her working as a success coach and speaker.

She has also contributed to a chapter of a book called Mumpreneur on Fire, the third and latest instalment of which is due to launch in Waterstones, having already been an Amazon bestseller.

The family, who have driven 30,000 miles to date, are due to continue their travels in the new year, when they’ll head off to Sri Lanka for six weeks, before embarking on a potential new life in Spain.

And, sharing snapshots online, they are constantly flooded with messages from other families, keen to step away from the rat race.

‘It’s so wonderful to see how the risk we took is inspiring people,’ Jennifer said.

‘The freedom to this kind of life is amazing. We’ve worked hard to make sure Ethan still socialises a lot with children his own age, too. He’s made friends all over Europe.

‘Van living was a lot to get used to at first, but we soon saw that we could do pretty much everything we could in a house – just on a smaller scale. We still had beds, a bathroom, a cooker and solar power electricity.

‘You have to have patience, and learn to laugh as things will go wrong. I still remember our first night in the van in Spain, not knowing how anything worked, trying to light the grill and put together our jigsaw puzzle of a bed – but it was, and still is, such an exhilarating adventure.

‘And to top it off, my businesses have also been so financially successful that we’re able to keep providing this amazing life for Ethan.’