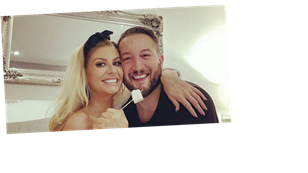 Mrs Hinch has put away her cleaning products, and picked up the cue cards.

She’s not doing it alone either, her husband who she often refers to as Mr Hinch has also got involved.

The couple will be hosting ‘The Hinch Christmas Quiz’ in order to raise money for Action for Children from the comfort of their own home, and you can get involved from yours too for just £10.

The virtual event which will take place on Thursday 17th December at 8pm will include three festive rounds, entitled ‘quiz-mas’ cheer, and a final round will be dedicated to the hosts. Those hours spent watching Mrs Hinch's Instagram story will finally be of use!

Sophie and Jamie Hinchliffe filmed segments for the event in their living room last night, while their one year old son Ronnie was asleep.

Sophie told her 3.8 million followers: “Me and Jamie have just got dressed and we’re going downstairs, not far, as we’re starting to film for the Hinch Christmas quiz for Action for Children. We’re hoping to raise some amazing money for an amazing charity.”

She continued, “We’ve got our cue cards. I feel like a right presenter. We’re looking forward to it. We’ve never really done anything like this together.”

The evening is in support of the charity’s Christmas campaign, Secret Santa, which aims to raise much needed funds for thousands of children and young people living in poverty around the UK.

The recording didn’t go completely to plan, and Mrs Hinch shared some hilarious outtakes from their presenting debut onto her Instagram story.

Fans were previously shocked to discover that Jamie was 11 years older than her.

Another question involves Sophie having to say rather than sing the lyrics: “Oh the weather outside is frightful” from the song Let it Snow.

In order to fight the urge to sing she says the line in a monotone manner causing Jamie to remark: “Well a bit more enthusiasm would be nice.” She then quickly said: “Delete that please.”