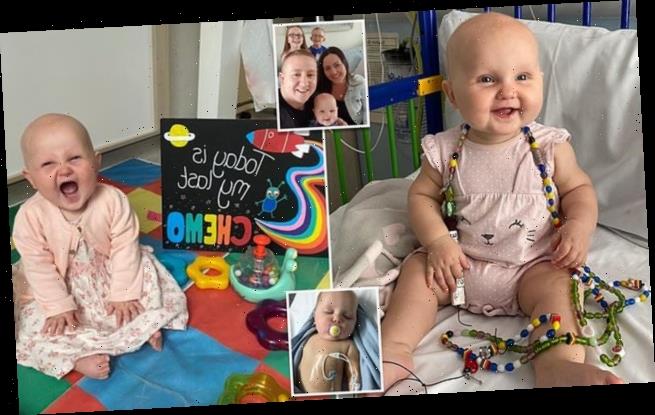 A mother whose daughter was diagnosed with a rare childhood cancer has urged parents to ‘trust their instincts’ if they believe something is wrong.

Donna Clark, 35, and husband Graham, 37, Gretton in Corby, Northamptonshire, first noticed their daughter Sophie, now one, was not herself at the beginning of the year when she began ‘screaming in pain’ and ‘wasn’t eating right’.

After months of ‘going back and forth’ to the doctor, Sophie was diagnosed with neuroblastoma, which affects just 100 children in the UK each year.

Sophie, who had a tumour in her back and stomach that was spreading to her spine, has since undergone six rounds of chemotherapy and her parents are hopeful that she is now on the road to recovery. 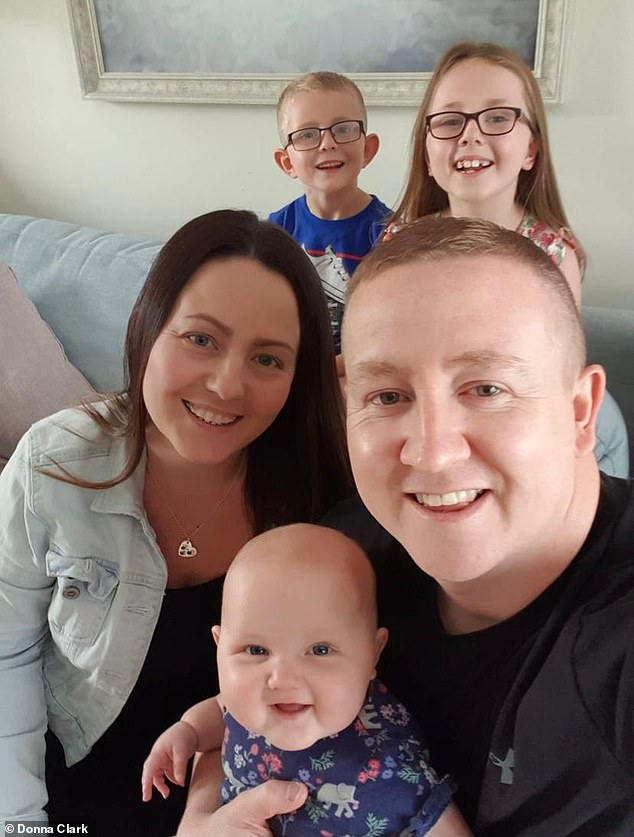 Donna Clark, 35, said she and husband Graham, 37, first noticed that their youngest daughter Sophie was not herself at the beginning of the year 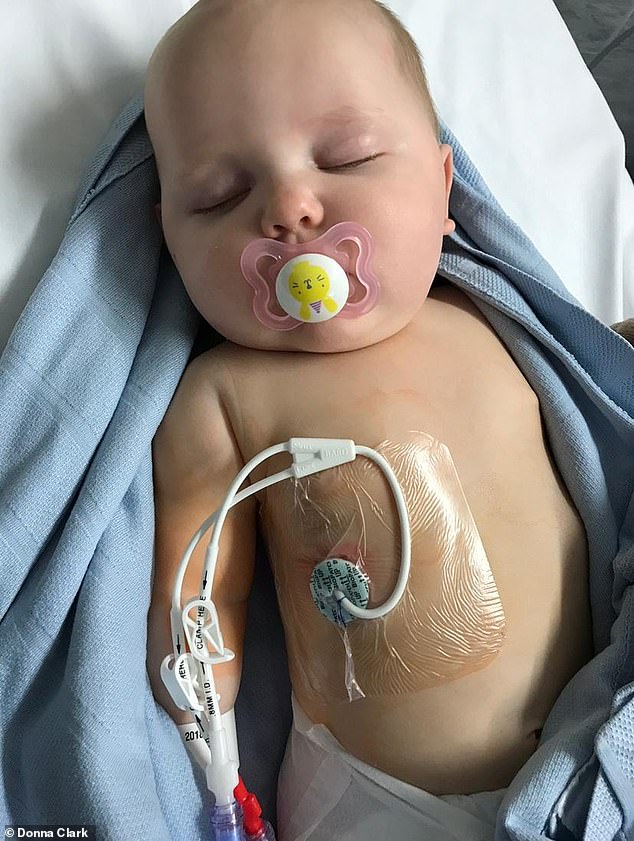 The family, from Gretton in Corby, Northamptonshire, went back and forth to see doctors before the now one-year-old (pictured) was diagnosed with rare childhood cancer neuroblastoma 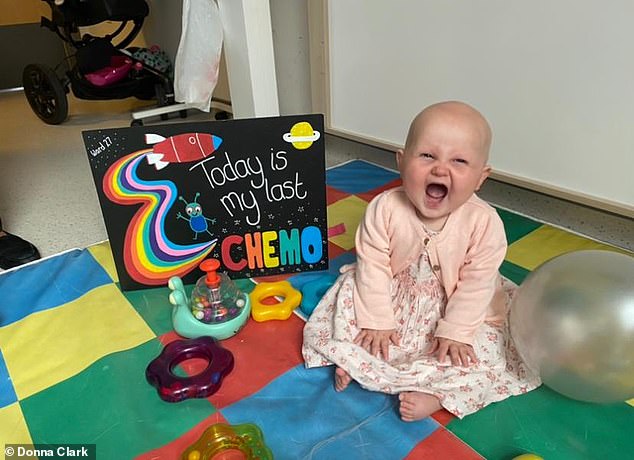 Donna, who previously worked as a childminder, spoke to FEMAIL about the first indications that something was not right with her youngest child.

She said: ‘For a few months she hadn’t been herself and we were back and forward to the doctors.

‘She just wasn’t eating right – she was on bottles at that point because she was only six months old we tried to introduce food.

‘From December she had been sleeping through the night but by January she would wake up several times a night and we didn’t know why.

‘Every time I sat her up she would lean forward and cry like she was in pain which made me think something was wrong.

‘In March, we ended up in hospital for six days because she was just screaming constantly and she kept pulling her legs up. 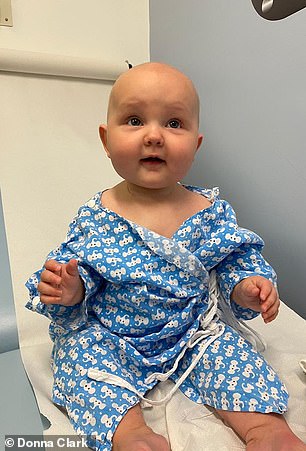 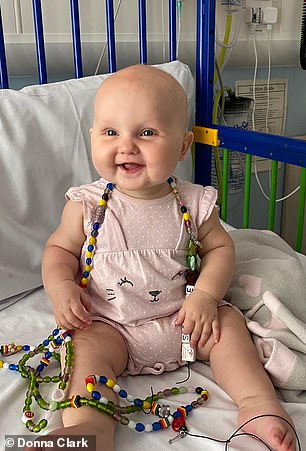 Sophie, who had a tumour in her back and stomach that was spreading to her spine, has since undergone six rounds of chemotherapy and her parents are hopeful that she is now on the road to recovery

‘We got sent home and then it was about a month later she was still crying quite a lot but I noticed a lump had come out basically over night.

‘I had been feeding her the night before and winding her and there was nothing there and the next morning I was doing the same and it was there. It was a big lump just out of her back.

‘I took her to A&E and then we had a scan a few days later and that’s when they blue-lighted us to [hospital] in Nottingham because she had a tumour in her back and stomach that was going into her spine.

‘She also had severely reduced movement in her legs. When they tested her – when they were tickling and spraying stuff at her feet – she couldn’t feel it because the tumour had started to press on the nerves which has left her with a bit of a funny foot now.

‘We went to Nottingham and she was MRI-ed under as soon as we got there and we were told at about 10 o’clock that night that they were 99 per cent sure it was cancer and that it was neuroblastoma.

‘The next day she had a biopsy, bone marrow testing and she started her first round of chemotherapy.’ 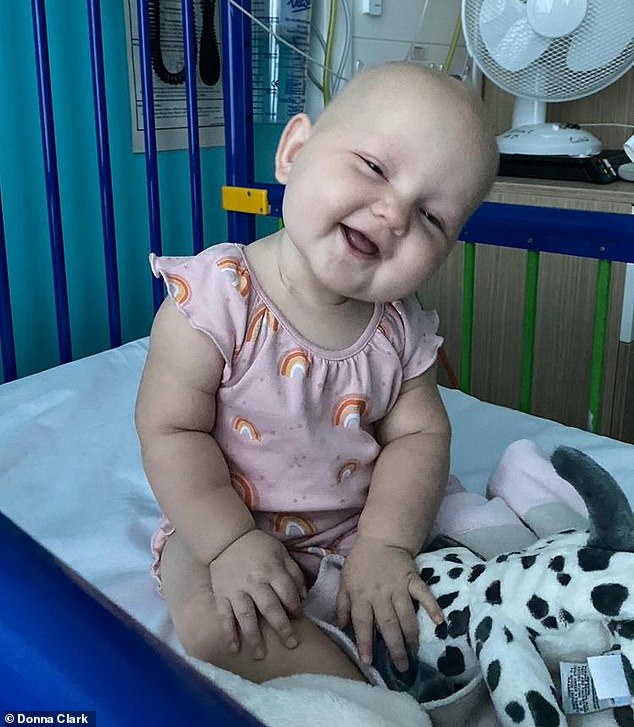 Donna and husband Graham, who is a company director, had not heard of the rare cancer before which effects less than 100 children in the UK each year.

She said: ‘I had never heard of it before but when the lump came up on her back my husband and I were looking at google, I know you shouldn’t do, and she had a lot of signs of neuroblastoma every time I put her symptoms in that would come up.

‘But we just tried to put that to the back of our heads.

‘I later called up the hospital quite distressed and demanded an ultrasound scan and they got her in. But it was a shock to eventually find out.’

Doctors told the family that the symptoms were potentially life-threatening as the tumour was pressing on her spine and she losing mobility.

Sophie, who turned one in September, underwent six rounds of chemotherapy but Donna said that she remained in high-spirits throughout. 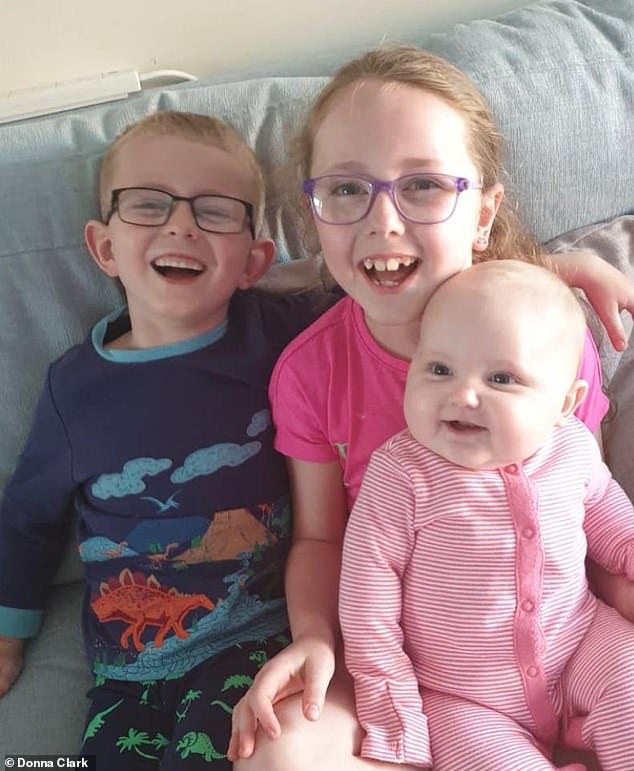 Speaking about the impact that the diagnosis had on the rest of the family, Donna said that the couple’s two other children Mia, nine, and Oliver, four, had been ‘amazing’ 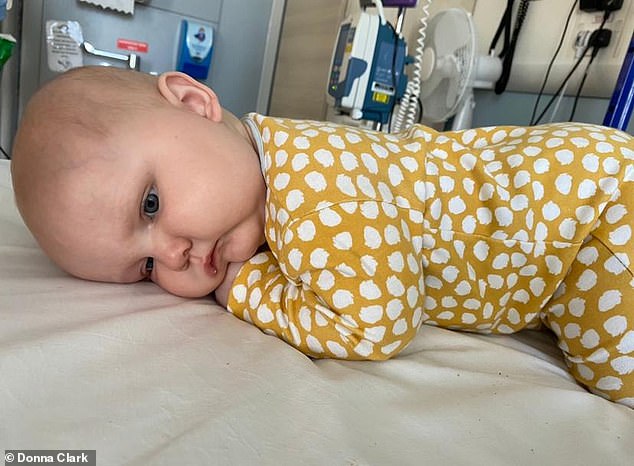 ‘She just smiled the whole way through even when her blood was low and she was going in for a blood transfusion or suspected infection. You could see how pained she was but she was just smiling all the time,’ she said.

‘Children are resilient anyway but she has just taken everything in her stride. She is absolutely amazing.’

Donna said that the journey was made harder by coronavirus restrictions in place at the hospital meaning that she and her husband could not attend the treatments together with their youngest daughter.

She said: ‘When we were waiting on her MRI scan he would have to wait outside the ward while I was in their with Sophie.

‘They tried to make it as easy as possible for us while still sticking to the rules but it was hard that the other children weren’t allowed to come in and see Sophie. 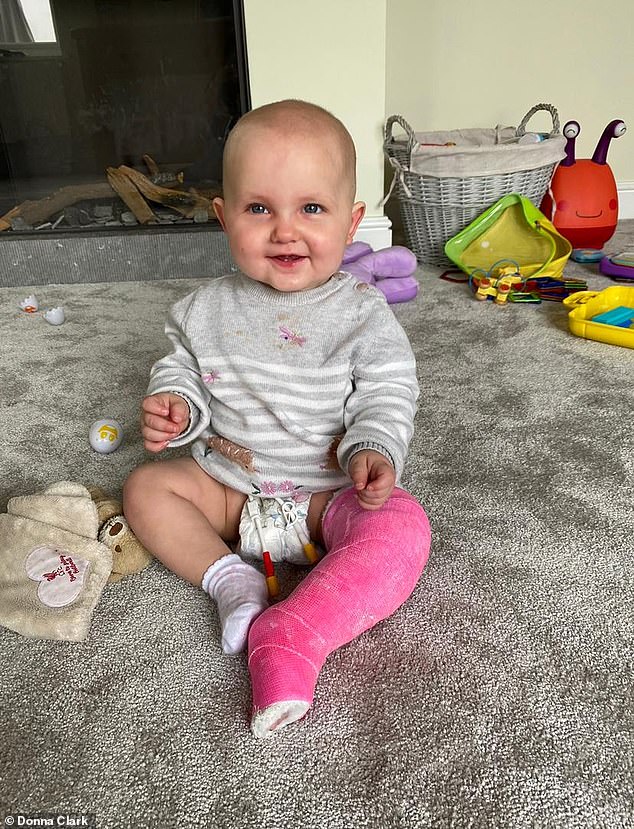 ‘We would video call them and they would see her like that which did make it easier but it was hard because I often didn’t have Graham to lean on and he was just sitting at home thinking about us in the hospital.

‘There were a lot of tears but we got through it as a family and its made us stronger.’

Speaking about the impact that the diagnosis had on the rest of the family, including Donna and Graham’s two other children Mia, nine, and Oliver, four, she said that it had been ‘manageable’.

She said: ‘Due to the treatments being mid-Covid and with all the restrictions in place we decided that what we would do is, I would do the hospital with Sophie and Graham would stay with the other two to kind of give them some consistency.

Neuroblastoma is a rare cancer that affects children and usually starts in the abdomen.

Around 100 children, who are typically under five, are diagnosed every year in the UK.

Neuroblastoma’s cause is unclear. There may be a family-history link.

Treatment depends on how advanced the cancer is and the risk it will return after therapy.

‘When the rest of the children went back to school mine couldn’t because Sophie’s immune system was so low the risk of normal infection was high enough never mind Covid as well.

‘So they didn’t go back to school until September. They knew it was cancer and that it was serious but I don’t think they realised the actual impact of it and how bad caner neuroblastoma is – it is a very rare childhood cancer.

‘But I think its brought us together as a family a lot closer.

‘Graham has been an amazing support to me throughout it all, when we were in hospital and at home, on good days and especially bad days. He is such a wonderful husband and dad.

‘Mia and Oliver have just been incredible for being so young, finding out their baby sister was so poorly, having to deal with Sophie and I in hospital so much. I am so proud of them.

‘They have been so understanding, they are brilliant with Sophie and always want to help, always making her laugh. Definitely the best big brother and sister and Sophie adores them.

‘I am extremely proud of our little family and how we came together and were so strong at such a devastating and hard time.’

Sophie has been left a splint on her leg as her foot has been damaged from the tumour pushing on her nervous system.

Donna said: ‘If that muscles does not regain movement then she may need an operation but they won’t do that until she is about four or five.

‘It is kind of difficult for her to walk but she has a splint and some specially-made shoes but she is now taking steps holding our hadn’t and she is moving her legs herself.

‘That in itself is a massive achievement considering that after her diagnosis in April we were told that there was a risk that she could be paralysed because she couldn’t feeling anything in her legs at the time.

‘After each lot of chemo she slowly started turning and then started crawling which was quite late as well but now she is everywhere – she is up the stairs, she is in the cupboards, she is in the sweetie drawer and eats everything in sight now.

‘Although she was happy during the treatment and things, she is now back to her content self that she was before January.’

Sophie will be having MRI scans for the next five years.

The family are currently waiting for the results of Sophie’s latest MRI scan and Donna has urged parents to ‘just trust their instincts’.

She said: ‘Parents know when there is something wrong like Graham and I did and we were just extremely persistent.

‘And they do say that neuroblastoma is hard to diagnosed again because it is extremely rare but you’ve just got to keep going back. That’s what we did and thank goodness we did because we caught it when we did.

‘Honestly you know your child just keep pushing if you feel like something is not right. We are lucky she got it young because the older you get the worse it can be. But you do still get children at 18 months dying.’

Donna said that it is also important for families to seek out support.

She said: ‘All our friends and family were amazing and although they weren’t allowed to come round Sophie because of Covid and because of her immune system the support we got was absolutely amazing.

‘Their encouraging words helped us a lot as well and both sides their support was amazing and we couldn’t have been without it.’