Breast cancer patient, 25, denied a baby: Young mother who was told treatment could leave her infertile is fundraising £6,000 to freeze her eggs after being refused by the NHS because she already has a child

A mother-of-one battling breast cancer at 25 who was denied fertility treatment to freeze her eggs because she already has a child is now fundraising to go private.

Beccie Lopez, from Gravesend, Kent, was given the devastating news she has grade 3 invasive breast cancer in February – just eight months after welcoming her baby boy, Dainchie.

She underwent an urgent mastectomy to remove her right breast, but needs further chemo and radiotherapy and will require hormone therapy for the next five years.

Having been told her treatment could leave her infertile, Beccie is now desperately trying to raise money to freeze her eggs so that she and her partner, 24, can have more children, after being denied the treatment on the NHS. 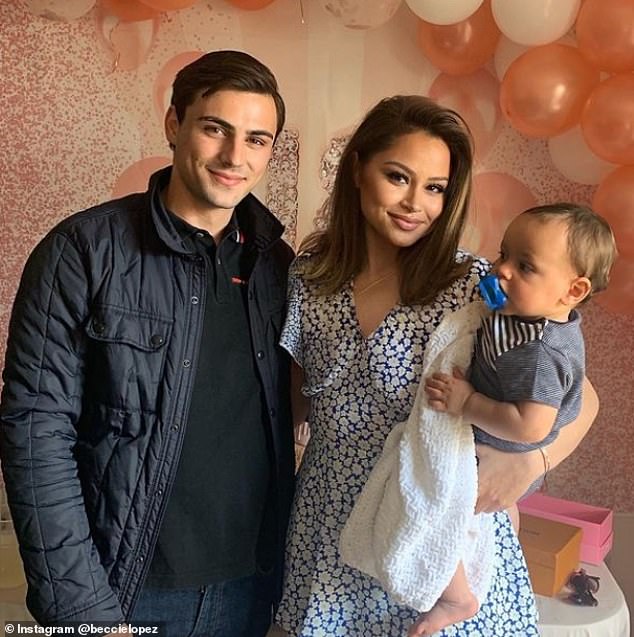 Brave Beccie Lopez, from Gravesend, Kent, is battling breast cancer at 25 and has been denied fertility treatment to freeze her eggs on the NHS because she doesn’t qualify due to already having a child (pictured, with her partner) 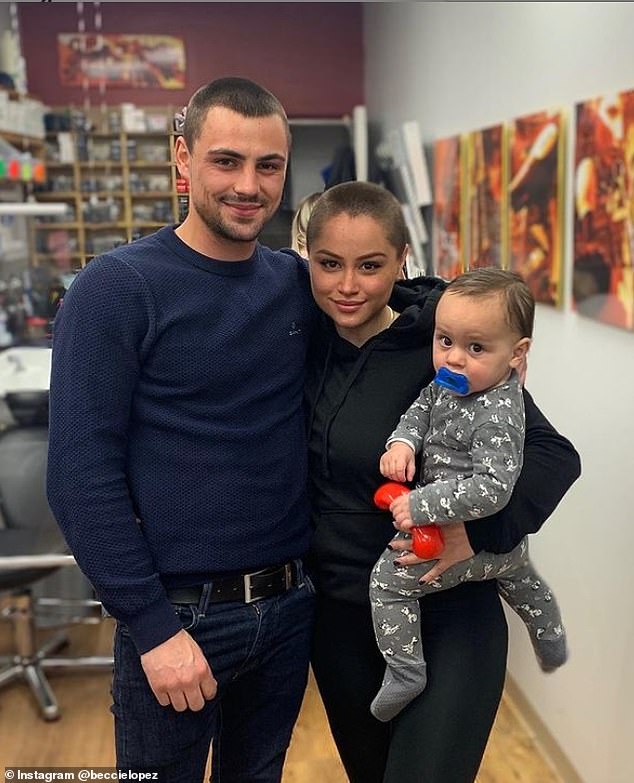 Beccie is now desperately trying to raise money to freeze her eggs so that her and her partner, 24, can have more children in the future

Speaking to FEMAIL, Beccie said: ‘It’s been extremely hard as a new mother whilst also trying to deal everything that has to go on in a cancer patient’s life. Mentally it’s been very hard, I am extremely tired from this and being a mother.

‘The mastectomy and the whole journey has been very surreal, no 25-year-old women wants to lose their breast!

‘I’m praying for my journey to end as soon as possible because I want to be healthy and cancer-free, but I hate that I’m wishing away the first year of my son’s life.’

Beccie, a self-employed beautician, went to the doctor after noticing dimpling and puckering on the skin of her right breast, and a golf ball-sized lump on her chest. 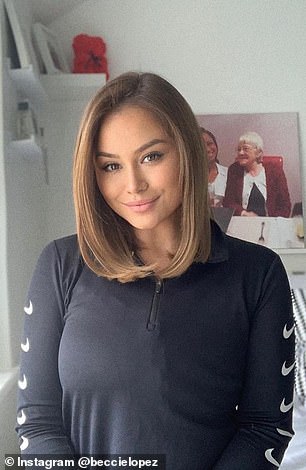 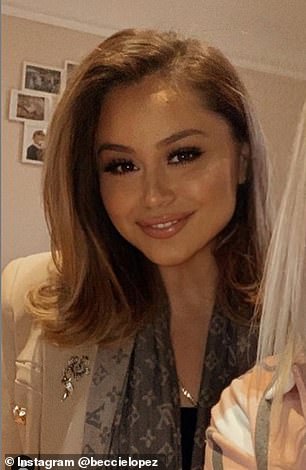 Beccie, a self-employed beautician, went to the doctor after noticing a dimpling and puckering on the skin of her right breast, and a golf ball-sized lump on her chest 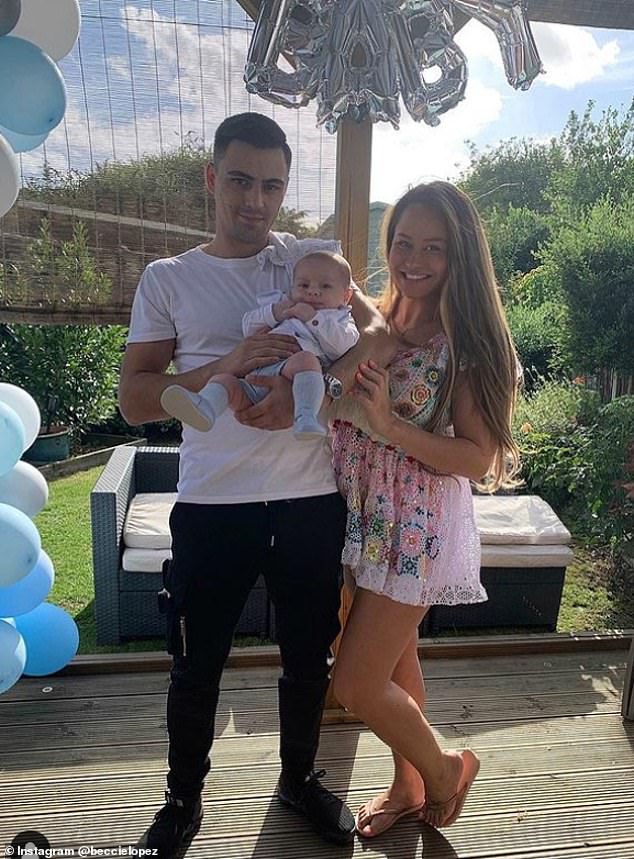 Speaking to FEMAIL, Beccie said: ‘It’s been extremely hard as a new mother whilst also trying to deal everything that has to go in a cancer patient’s life’

When she was diagnosed with breast cancer, despite having no history of it in her family, she said it was the most ‘heartbreaking, petrifying, devastating moment’ of her life.

‘All I wanted to know was if I was going to die,’ she recalled. ‘But I remained positive and strong for my son – it’s been the only way to get through this horrific journey.’

Beccie, who recently shaved her head ahead of beginning six months of chemotherapy on May 14, followed by radiotherapy, has been forced to close her business due to her illness.

She hopes she’ll be able to start it up again in a couple of years, and thankfully she has the support of her partner who has been her rock throughout. 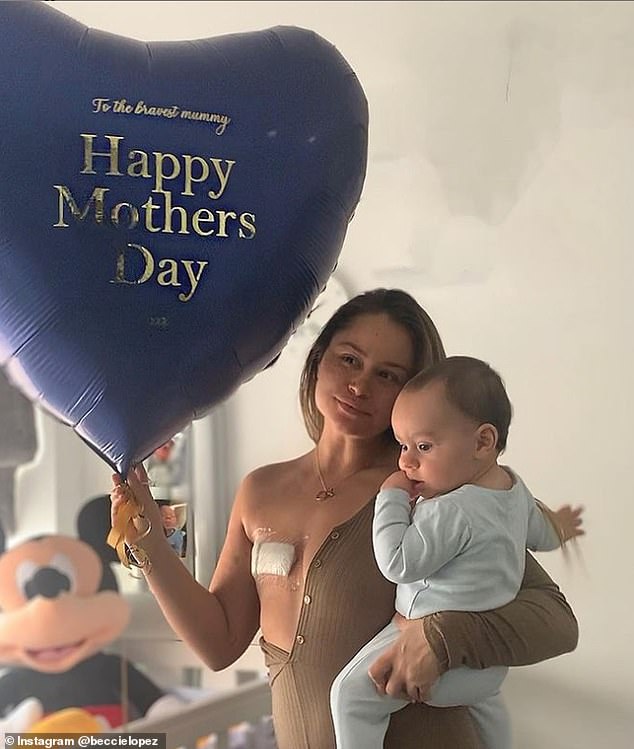 Beccie had an urgent mastectomy to remove her right breast, but needs further chemo and radiotherapy and will require hormone therapy for the next five years

WHAT IS INVASIVE BREAST CANCER?

Invasive breast cancer means that the cancer cells have grown through the lining of the ducts into the surrounding breast tissue.

If you have grade 3 breast cancer, you’re more likely to be offered chemotherapy. This is to help destroy any cancer cells that may have spread as a result of the cancer being faster growing.

The symptoms of breast cancer include a new lump or thickening in your breast or armpit, a change in size, shape or feel of your breast, skin changes in the breast such as puckering, dimpling, a rash or redness of the skin, fluid leaking from the nipple in a woman who isn’t pregnant or breast feeding, or changes in the position of nipple.

It’s important that you see your GP if you have any symptoms.

‘If anything he took my diagnosis harder than anyone,’ Beccie said.

‘People forget that other halves also have to take everything on themselves and it can be extremely hard on them.

‘They need taking care of as well on a journey like this. It’s heartbreaking for everyone.’

Fertility treatment to have her eggs frozen and stored costs around £6,000. Beccie’s friend Laura Read set up a GoFundMe page to help her and her partner raise the funds.

‘We are very, very blessed to have a healthy son, but we have always talked about expanding our family when the time is right,’ Beccie explained.

‘It broke my heart when they told me what chemotherapy will do to my ovaries.

‘I was told there are chances they may start working on their own again naturally in time, but when I asked if they could guarantee it, they said no, which is why I knew straight away I wanted to go ahead with getting my eggs frozen.

‘This may be our only chance of having more children. However I was refused on the NHS because we already have one child.

‘I appealed, but sadly I was refused again because of this.’

Beccie said she has been ‘completely overwhelmed’ by the generosity and kindness of those who have donated so far.

‘There are no words to thank everyone,’ she said.

‘I have many reasons in my life right now to sit and feel sorry for myself, but then I wake up and see the most beautiful smile off of our son and it reminds me why I keep going daily and my reason to fight.’ 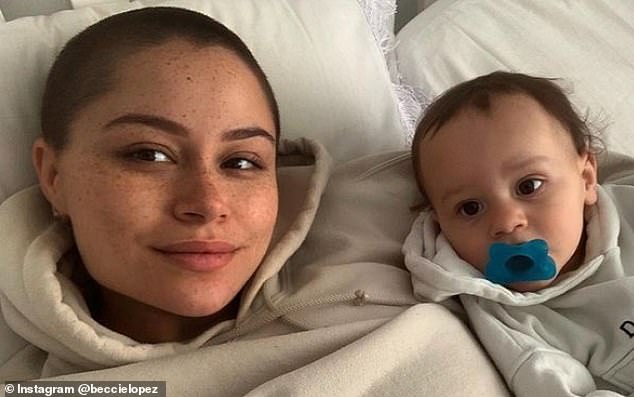 Beccie, who has shaved her head ahead of beginning chemotherapy on May 14, which will last six months, followed by radiotherapy, he has been forced to close her business due to her illness