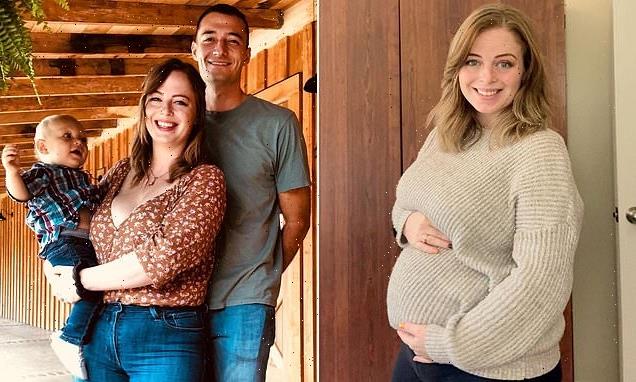 Mother, 26, born with TWO vaginas, cervixes and uteruses only discovered she has the condition while giving birth – and says it’s caused years of painful sex with her husband

A mother born with two vaginas has told how she only discovered the condition when giving birth to her son.

The mother-of-two only discovered the condition just over a year ago, when she gave birth to her son Zack.

She wanted a natural birth, but the experience was excruciating because her vagina has been ‘halved’ inside due to a dividing wall of tissue in the vagina, known as a septum.

The diagnosis explained why sex with her husband Gregory, 26, had always been so painful, despite being dismissed by medical professionals. Mother-of-two Brittany Jacobs, 26, from North Carolina, found out she had two fully-functioning reproductive systems, and therefore has two uteruses, two cervixes and two vaginas when she gave birth to her first son over a year ago (pictured during the pregnancy) 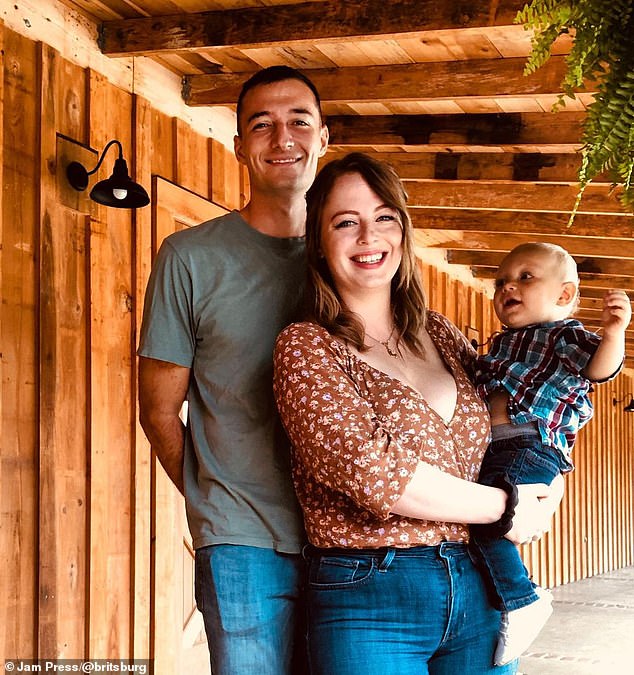 Brittany, pictured with Zack, revealed she had always found sex with her husband Gregory, 26, painful, and realized it was due to the condition

She now wants to go through an operation to remove tissue around the septum to make sex less painful.

Brittany, who is a student, explained she had gone to physicians complaining of sex being painful but had her concerns dismissed.

She said: ‘When I brought it up to my doctors they told me I just needed to relax before having intercourse.’

However in reality the issue was caused by the septum in her vagina, which divides the vagina into two sections.

Many girls don’t realize they have a vaginal septum until they reach puberty, when pain, discomfort, or an unusual menstrual flow sometimes signal the condition.

Others don’t find out until they become sexually active and experience pain during intercourse. However, some women with a vaginal septum never have any symptoms. 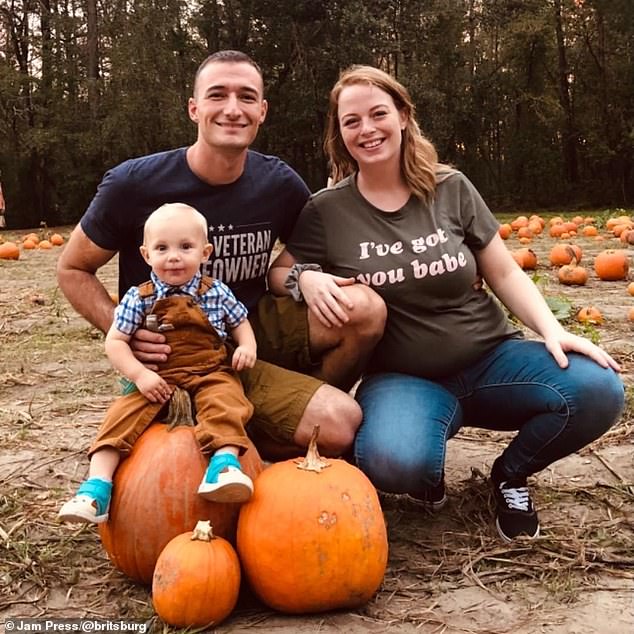 Pictured: the couple proudly announcing Brittany’s second pregnancy when she was expecting Avery 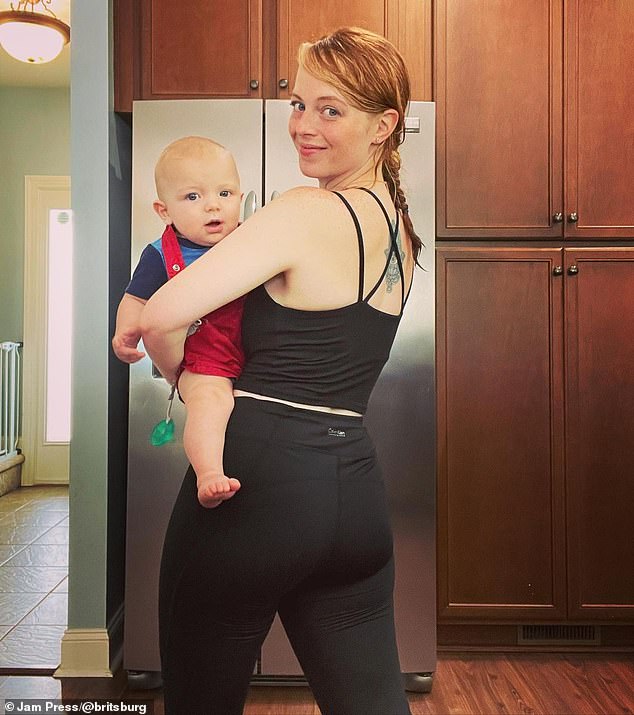 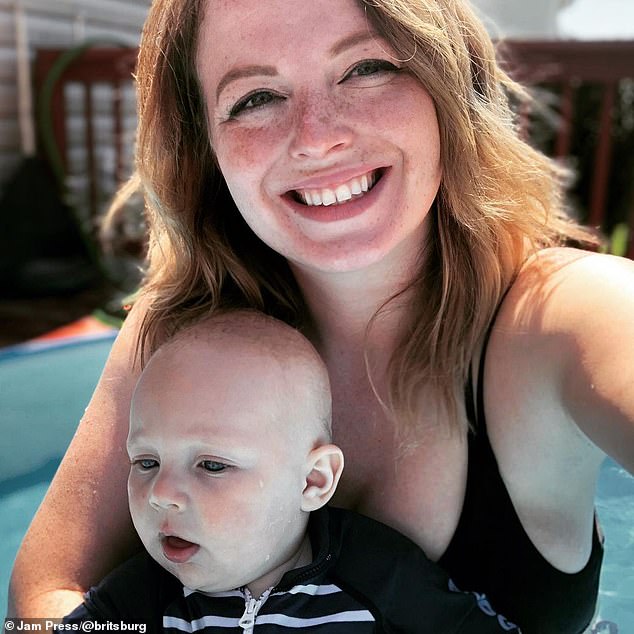 The mother was in so much pain, she couldn’t go through a natural birth liked she had planned when she had Zack, pictured 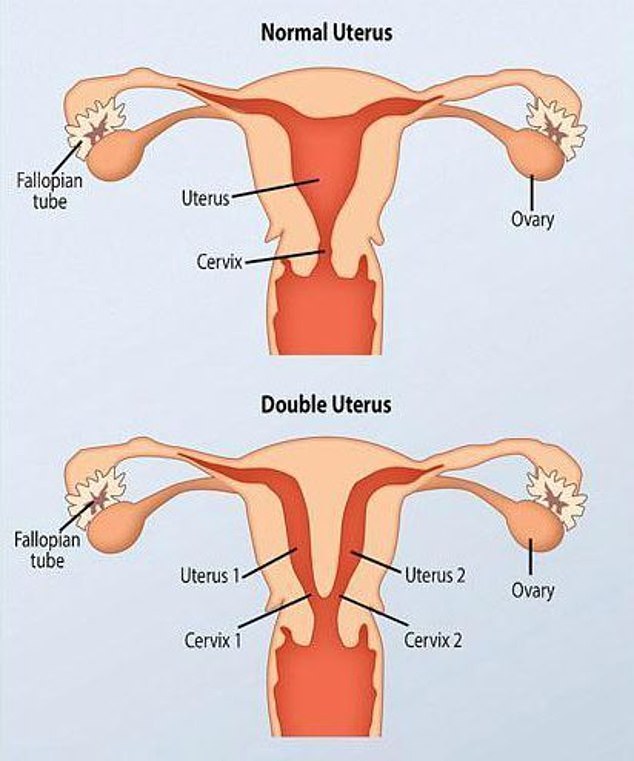 A graphic compares what a normal uterus looks like, compared to a woman who has two cervixes and two uteruses

Brittany explained hers was discovered during childbirth.

‘They were trying to deliver my first-born son when they noticed my septum,’ she said. ‘I was trying to have a natural birth and so they began cutting without medication.

What is uterine didelphys? The medical condition where woman have two vaginas

A double uterus is a rare abnormality that develops when a baby girl is in her mother’s womb.

Every uterus starts out as two small tubes called Mullerian ducts. As they begin to develop, they usually fuse together to form one uterus.

But in rare cases, the tubes remain separate and become two uteri.

Sometimes there is only one cervix for both wombs, other times each womb has a cervix.

Often the vagina in women with a double uterus is divided into two separate openings by a thin membrane.

It’s entirely possible for women with a double uterus to carry a baby to term.

However, the condition does come with an increased risk of miscarriage or premature labor.

It’s quite common for a woman with a double uterus to experience no symptoms whatsoever.

‘I do not remember much but I do remember it was so painful – I was kicking and screaming and begging myself to pass out. They eventually gave me an epidural and then cut it. At that point, it was painless.’

Brittany slammed the lack of support and understanding for women with her condition, which is affects fewer than 1 per cent of women in the US.

‘There is knowledge of my condition as a birth defect but as far as long-term issues go, I have had to rely on my support group,’ Brittany said.

‘We still try to rely on verified information – women discuss their research articles, conversations with doctors, ultrasound results and much more.

‘It is frustrating the amount of doctors and midwives who say they never learned about uterus abnormalities so sometimes you have to rely on word of mouth from people that also suffer with uterine didelphys.

‘I am now mindful that doctors do not know as much as we expect. I have to do my own quality research on my issues and advocate for my needs.

‘I am understanding why my body is different from others and why it may need different care than others.’

Brittany must now be cautious when it comes to birth control and kidney issues, so she takes supplements to protect her health. She also has a second son, six month old Avery.

She now shares videos on TikTok (@BritsBurg), where she has connected with other people with uterine didelphys and shares her experiences with her 112,700 followers.

However, some stories have been tough to hear.

Brittany added: ‘I had a man reach out to me personally and tell me that his wife has uterine didelphys and she also did not know until she was giving birth.

‘She ended up passing away during birth and so did her child. It broke my heart to hear that someone let that woman and her baby down.’ 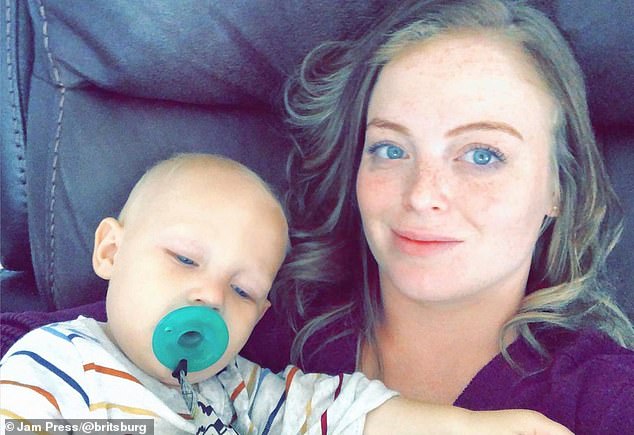 The mother-of-two with Zack. Brittany said doctors had dismissed her when she had told them she found sex with Gregory very painful 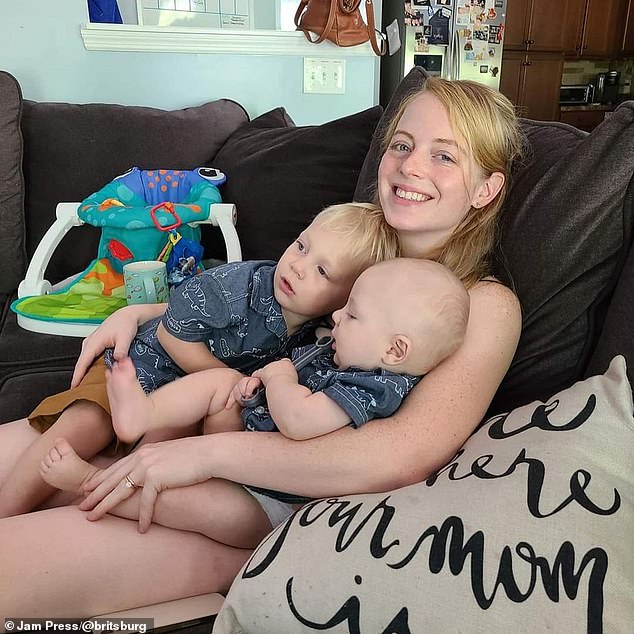 Brittany, pictured, said she would wait until the couple had relocated to another area to look into an operation that could change her sex life for the better 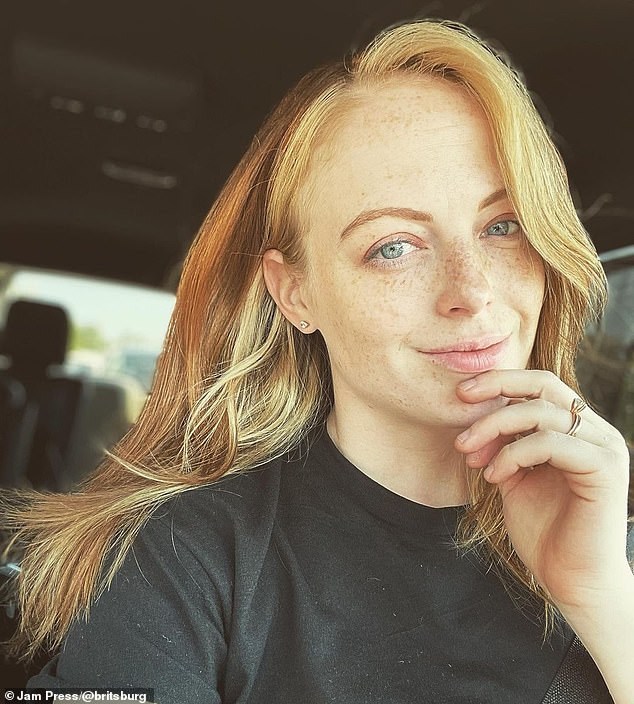 The mother-of-two has now set up a TikTok account about her condition, and said people have reached out with their own stories about uterine didelphys

Brittany now wants to have further surgery, after continuing to find sex uncomfortable due to the remaining scar tissue left when her septum was cut in childbirth.

While Gregory finds sex better now, for Brittany it is a constant reminder of her painful condition.

She said: ‘I find it much more painful but my doctors told me it would get better. My scar tissue is very uncomfortable for me. I would like to get some more tissue removed from having my septum cut to make sex less painful.’ 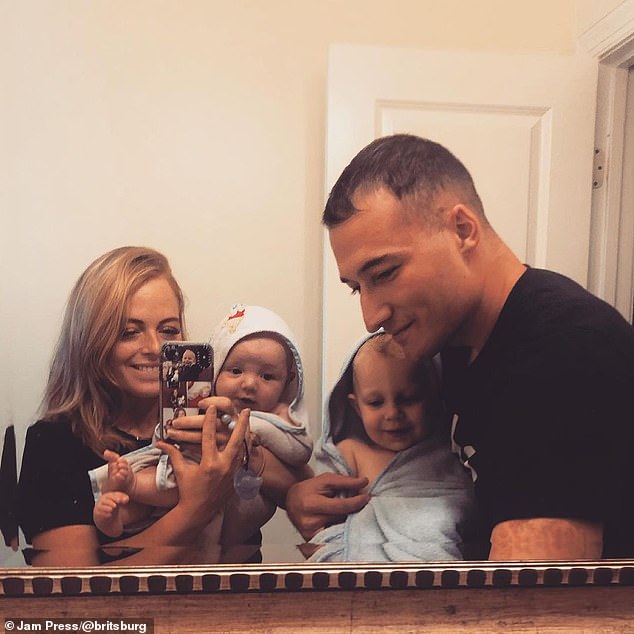 Uterine didelphys is not usually life-threatening, but a man told Brittany his wife died during birth because of the condition 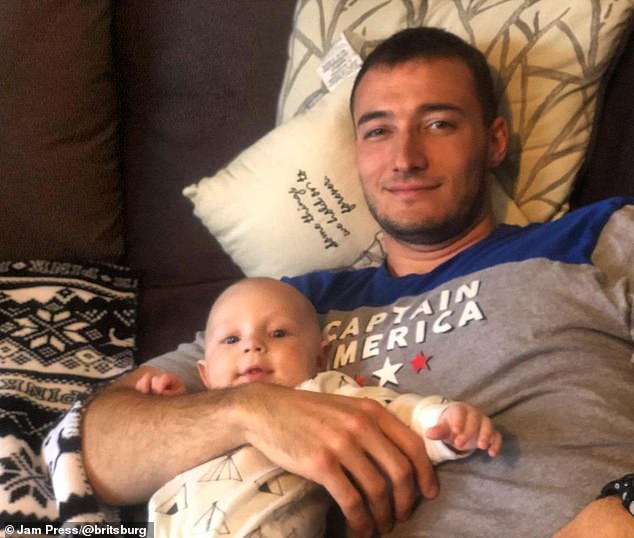 Gregory, pictured with Zack when he was a baby, said he found sex with Brittany less painful after she gave birth to their first son 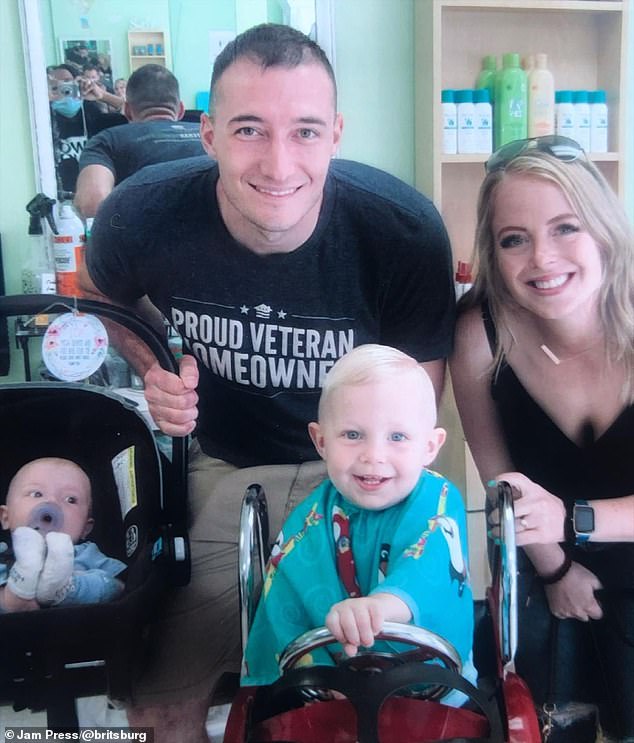 The happy family now. Brittany said she tried to give support to women with similar stories as her or with other vagina issues