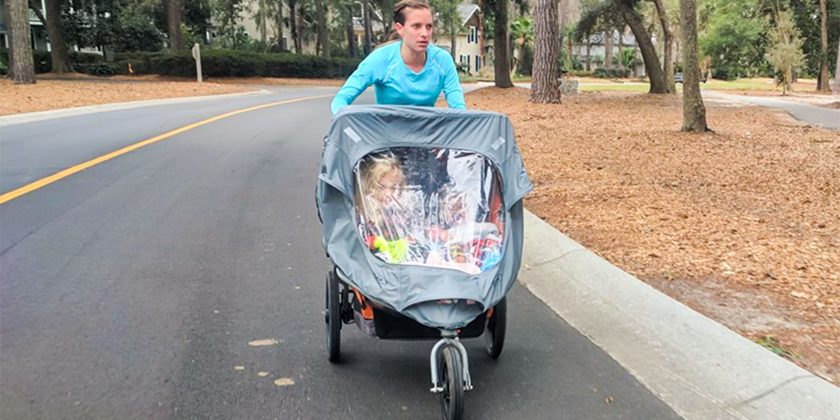 Rachel Bowling, of Ridgeland, South Carolina, had loved running with her kids since giving birth to her oldest daughter, Addy, three years ago. So, the mom of two got a bright idea when she stumbled across a running magazine last year.

“After my second baby … I started running with a double stroller so I was able to take both girls. I’d run with them in the stroller two to three times a week for 45 minutes or less,” Bowling, 30, tells PEOPLE.

“[I saw] a special about another mom breaking a stroller record. So I was like, ‘Huh, that sounds interesting. I’m going to check that out.’ “

So, Bowling decided to apply to break the Guinness World Record for fastest 10K with a double stroller.

She began training in September and, on Jan. 12, she ran across the finish line at the LowCountry Habitat for Humanity’s resolution run with a time of 42:34. 55, she says.

The standing record is 44:45 and it will take about three months for Guiness to recognize Bowling’s new record, according to The Island Packet.

“It was a tough race … When I realized I had gotten the record, I was just ecstatic. I just couldn’t believe we’d done it. It was very exciting,’ ” Bowling gushes to PEOPLE. “When the girls get older I can say, ‘Look what we did! We broke a world record!’ “

Bowling says she sprained her ankle just one day before the rest, and was proud to have followed through with the challenge.

“I felt so proud and so much joy because my husband was there, my brother was there. They were so motivational during the run, just pushing me and cheering me on,” she says. “The girls were so good. It’s like everything just came together.”

Bowling ran with her daughters, Addy and 1-year-old Autumn, in the stroller. But she says the little girls were too young to understand the significance of the event.

“[They were] totally nonchalant about the whole thing,” she says.

“The 1-year-old, Autumn, she slept the whole time. The older daughter, she did not sleep but she was talking, looking around. At one point she was singing. That really brought a smile to my face. We finished, they got out and went right to the playground.”

Bowling’s story has made headlines, which the mom says has left her “speechless.”

“Even if I can just inspire one mom, one dad, to get out there with their kids and do something for them and show their kids how important it is to be active, then all of this will be worth it,” she tells PEOPLE.