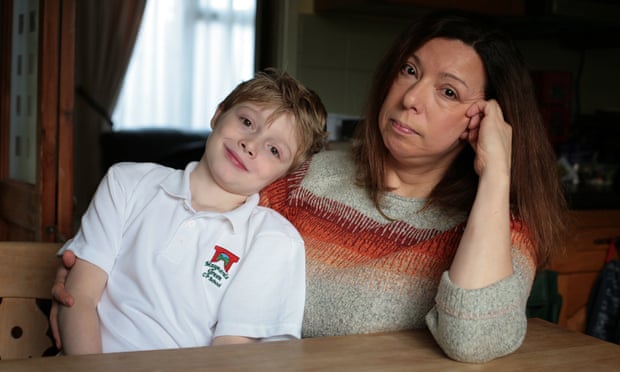 Luis was three weeks old when we found out he had cystic fibrosis. Neither my husband nor I had heard of the condition before, but we knew very quickly our lives were about to change for ever from that moment. Of all of the stats thrown at you when you hear the diagnosis, one sticks out more than any other: Luis’s life expectancy was 38, my age at the time. We would most likely outlive our baby boy.

Luis is eight years old now and, though parts of our routine will be recognisable to every parent, he has a life of many challenges. It starts in the morning with a medical regime that takes up to two and half hours. Every day he takes 22 tablets, three nebulisers, two inhalers, nasal sprays and lots of supplements. The condition means he struggles to put on any weight, so we need to keep a constant eye on his eating – to ensure he gets much more than the recommended calorie intake for children of his age. He’ll have physio sessions, too, and be surrounded constantly by adults worrying if he’s OK. Then, before bed, he’ll have another hour and a half of his medical regime. Those are the good days.

On a bad day, Luis will end up in hospital. A cough or cold will have turned serious. His lung function will plummet. He’ll be off school for weeks, missing not just classes but birthdays and time spent with friends – the little things that make being eight years old so much fun. Or it might be like last week when he had a stomach bug and was reduced to skin and bones as his weak body shed the tiny amount of weight he’d been able to put on previously. The cause of those days varies, but the worry is always the same – could this bad day lead to his last day?

With our lives being punctuated by such worry, it’s no wonder that news of an effective treatment to cystic fibrosis meant so much. A drug called Orkambi, developed by Vertex Pharmaceuticals, is licensed to treat cystic fibrosis in patients, from two-year-olds to adults, who have a specific genetic mutation causing the disease (called the F508del mutation). Orkambi can slow progression of the disease, improve lung capacity and reduce the frequency and severity of lung infections. For Luis it would be life-changing. Orkambi is the first of a series of drugs that are being developed, with forthcoming ones expected to be even more effective.

But there’s a snag. Though the drug is available and on the market, the NHS can’t afford it. Of course, a health service that’s already under extreme financial strain will always have difficult choices to make – but when the drug company is charging an exorbitant £105,000 per year for a drug taken every day for life, it’s no surprise that the NHS isn’t able to pay. After three years of fruitless negotiations, Orkambi is still not available for cystic fibrosis patients in the UK.

The situation is unbearable, but it’s not intractable. Vertex has the ability to charge as much as it wants because it has a patent on Orkambi that grants it a 20-year monopoly, free from competition. But its intellectual property rights are not absolute, with national and international law recognising that those very rights need to be balanced against patients’ right to health. The World Trade Organization’s rules provide legal safeguards that are supposed to ensure public health is not sacrificed at the expense of the profits of the owners of intellectual property rights.

One such safeguard is for when patent monopolies prevent access to a medicine, governments are able to issue compulsory or government-use licences, known in UK law as crown use licences. Dr Andrew Hill from the University of Liverpool estimates that, under one of these licences, an identical but affordable copy of Orkambi could be bought for less than £5,000 per patient per year. This would allow the NHS to treat all cystic fibrosis patients for £20m per year, saving the suffering of my child and thousands of others, as well as nearly £4bn in cost to the NHS over 10 years.

Experience: both my children have a terminal illness

Dr Hill has discovered that the drug is easy to manufacture, with dozens of companies around the world producing the chemicals for use in research. While it would take some time for the production and regulatory hurdles to be overcome, they are in no way insurmountable.

Today, family members of cystic fibrosis patients are launching a campaign with Just Treatment urging the government to issue a crown use licence for Orkambi. We know the NHS can’t pay the drug company list price, we simply demand that the government step in to cut the cost. For Luis it would be life-changing. He’d be sick less, miss less school, fewer friends’ birthdays – and ultimately be able to live a more normal life for longer. For me, as his mother, it would mean not lying in bed awake every night fearing the sound of a cough or sniffle that could be the start of a serious illness.

So far the government has resisted taking any action – but enough is enough. It is within ministers’ power to end this deadly stalemate – and there’s cross-party support for this emergency intervention. I have no doubt that if this was a child of a minister, they would be acting with haste. For the sake of Luis, and thousands of others across the country, it’s time that the stranglehold Vertex has on life-changing drugs for cystic fibrosis is finally broken. We’re urging ministers to take action on the price of Orkambi as if it was their own children’s lives that depended on it.

• Christina Walker is a cystic fibrosis campaigner from East Sussex