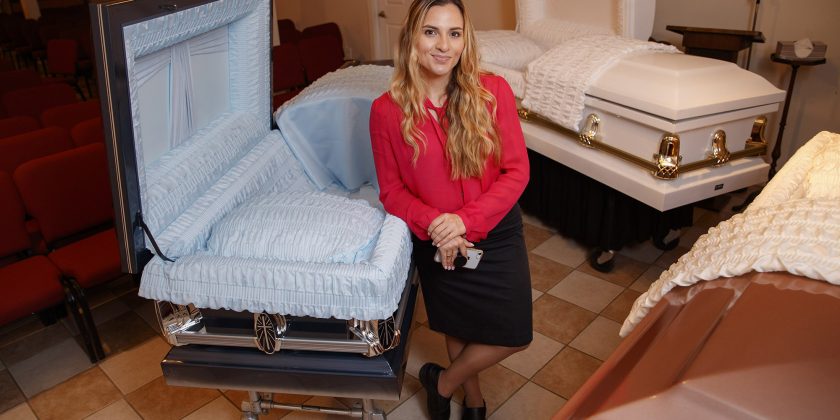 Young morticians are infiltrating funeral parlors, bringing fresh energy, perspective and technology to the world of embalming and bereavement.

“I have an old soul,” Lauren J. Bowser, a 32-year-old funeral director in Piscataway, NJ, tells The Post. As a licensed mortuary practitioner, she works with both the living and the dead, embalming and preparing bodies for their caskets, while also preparing families for the funeral process. Unlike many of her peers, Bowser didn’t inherit her mortuary career from a parent. Instead, she says, her path was guided by a funeral she attended as a child — and her love of classic horror movies, such as “Night of the Living Dead.”

“Once I realized that I was not scared of the dead and that I could take care of them, I [knew I] was just meant to do it,” says Bowser, who landed her first funeral-home gig at 16 through a high-school job fair.

The signs were also there for Alanna Henry, a 29-year-old mortician in Atlantic City, NJ. Her favorite toy growing up wasn’t a Barbie, but a bobblehead doll of Hades, the god of the underworld in Greek mythology. (“I always root for the anti-hero,” she says.) But career inspiration didn’t officially strike until college, when she lost interest in her planned pharmaceutical track.

“I started researching alternative careers where I can use my science background,” she says. “Funeral director or coroner kept coming up.” She says embalming is her “favorite” part of the job.

‘I’m hoping to bring more transparency to the field since it’s seen as taboo and morose.’

It’s a little strange for traditionalists, such as Joseph B. Papavero, 58, to see young people choosing to go into mortuary sciences. The Papavero Funeral Home in Maspeth epitomizes old-school mortuary norms: a family business run by men for five generations. But for the most part, he thinks it’s a good thing.

“The younger generations are more IT savvy,” he says of the new class of undertakers. “It’s a very good thing, actually, because the customers are much more Internet-educated now. Twenty years ago, the only way to find out if someone died was to put it in the newspaper. Now, there’s Facebook.”

Bowser agrees, and hopes to bring modern elements to funeral services, whether it’s through electronic guest books or nontraditional ceremonies.

“I work in a place where we are carrying on the traditions of great-great-grandparents,” Bowser says. “But if a 98-year-old grandmother dies, her 65-year-old daughter may not use the Internet every day, but the 40-year-old granddaughter sure does. It’s important to have digital options,” such as digital casket catalogs and streaming services so relatives can “be there” from all over the world.

But millennials are bringing more to the embalming table than just tech help. Henry, for example, wants to change the way we think about death.

“I’m hoping to bring more transparency to the field, since it’s seen as taboo and morose,” Henry says. “[But] it’s just another aspect of life that we all, as human beings, go through.”

She wants to create educational seminars or “town halls” to help people prepare for what happens when a loved one dies, and to help people who fear the inevitable. But in true millennial fashion, Henry also plans to go digital: She thinks there should be more TED Talks, podcasts and YouTube channels dedicated to answering and explaining different aspects of death.

“Why can’t we just openly discuss [death] as we do all other things that are a part of our daily life?” Henry says.

Talking about death, Henry says, “can help those who are scared feel more comfortable.

“Death isn’t all doom and gloom.”