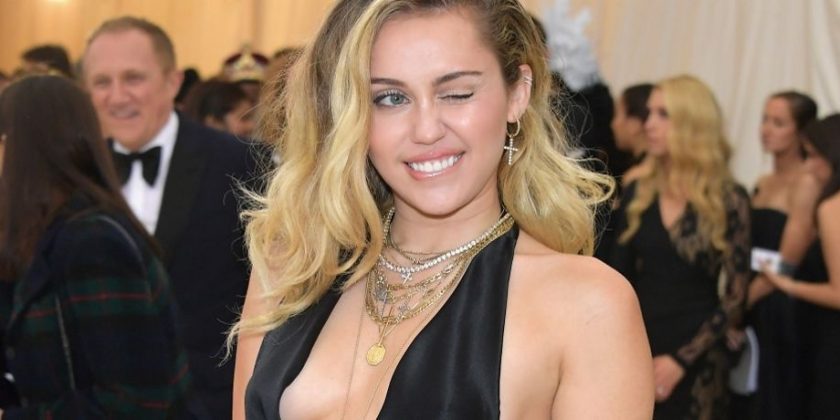 In a private, secret wedding, pop star Miley Cyrus said “I do” with longtime sweetheart Liam Hemsworth the night before Christmas Eve. Both had previously denied the rumors swirling around that they had plans to wed soon, so the news was a surprise, as was Miley’s custom-made wedding dress.

Miley is known for her crazy outfits both on and off the stage. She’s worn a skirt in the shape of a pair of lips that matched a bikini with eyeballs, a sequined and low cut pantsuit resembling a Lite Bright, an outfit that used only a pair of straps to cover her important bits on the top and something akin to a chandelier on the bottom, a clear plastic dress with strategically placed buttons, an orange sequined thong bodysuit with cutout sides and an orange fur jacket, a funky dress of sorts made out of Michael Jordan No. 23 jerseys, and a sequined bear leotard.

Leopard print, sequins, feathers, mesh – you name it, she’s worn it. So it surprised many people when Miley selected a custom designed ivory silk satin corseted draped gown for her intimate wedding.

Designed by Vivienne Westwood, the gown was simple and elegant. Miley pulled off the rest of the look by styling her hair in soft waves like a pin-up model, reported PEOPLE. Liam opted for a black suit with a black tie, paired with a set of white sneakers.

Miley loves Vivienne Westwood designs and stepped out on Dec. 10 wearing a tartan jacket and matching pants by the designer over a shirt that said, “Protect Kids Not Guns.” Liam and Miley’s surfer friend Conrad Jack Carr shared photos and a video to Instagram after the ceremony. One picture captured Liam and his brothers Chris and Luke doing a “shotski.”

Mr. and Mrs. Balloons floated in the background. Another photo shared by Conrad featured the newlyweds in front of the cake and cupcakes with Miley’s mom Tish included in the picture. Her sisters Noah and Brandi also were at the ceremony, which was held at the couple’s home in Franklin, Tennessee.

Fans of Miley and Liam have been hoping the pair would wed sooner rather than later. They dated for years before he proposed in 2012, but one year later they broke off their engagement. A few years later, they rekindled their romance and in 2016 they were fully committed, enjoying dinner with the parents, going on date nights, and even spending the holidays together.