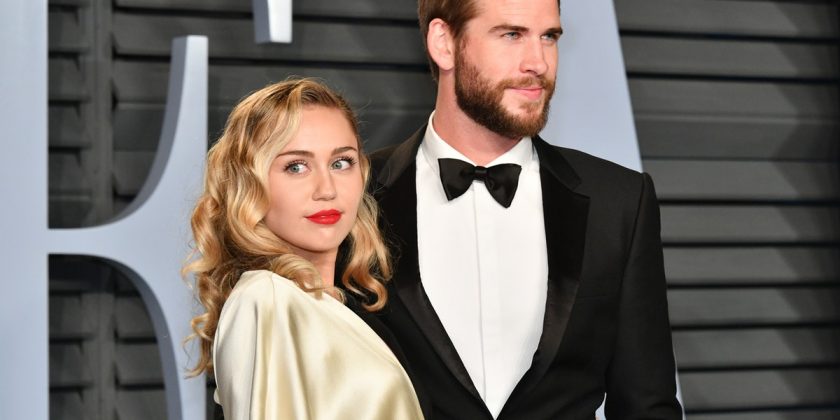 Well, here’s some potentially exciting news involving this celebrity couple: There are new photos of Miley Cyrus and Liam Hemsworth that just might confirm recent rumors that the two got married. On Instagram and Twitter on Wednesday, Cyrus posted black-and-white photos with Hemsworth. In the pictures, he’s wearing a suit and she appears to be wearing a white dress. At this point in time, it remains unclear if the images are from their rumored wedding. (Bustle has reached out to Cyrus and Hemsworth’s reps for comment, but did not receive an immediate response.)

As you can see below, one photo shows the couple kissing in a sweet selfie. In another set of images, the Hunger Games actor and the musician are seen passionately embracing. It also looks like Hemsworth is wearing what could be a wedding band on his ring finger. The last photo shared by the "Nothing Breaks Like a Heart" artist shows the two hugging one another again. Based on their hug, they seem to be holding onto each other tight, and you can tell how in love they truly are.

Cyrus only captioned one photo by writing, "10 years later ….." Yes, they’ve known each other for that long. She also tagged Vivienne Westwood in the image, so it seems the fashion designer designed Cyrus’ dress.

The above descriptions don’t do the pictures justice, so take a look at them for yourself.

Can they get any more adorable?

Holding Onto Each Other Tightly

This is how you hug someone you love. Also, do you see the mysterious ring on that finger? (Make sure to click through to see the second shot.)

And Another Touching Embrace

These really are stunning images.

Marriage rumors involving Cyrus and Hemsworth started on Dec. 23, thanks to their friend Conrad Jack Carr sharing photos and videos on his Instagram Story. Not only are the former Hannah Montana star and Hemsworth wearing the same attire as seen in the photos above, but Carr also captured balloons that spelled out "Mr." and "Mrs." and they even appeared to be cutting a possible wedding cake. (Bustle previously reached out to the couple’s individual reps for regarding the wedding reports, but did not hear back.)

Some of their family members were also seen in Carr’s Instagram Story, including Hemsworth’s brothers, Chris Hemsworth and Luke Hemsworth, and Cyrus’ mom, Tish Cyrus. According to People, Cyrus’ sisters, Noah and Brandi Cyrus, were in attendance at the yet-to-be confirmed event, which reportedly took place at the couple’s home in Franklin, Tennessee.

Cyrus and Hemsworth’s relationship has had many ups and downs, including the two breaking up in September 2013 and then reuniting in January 2016. Furthermore, Cyrus and Hemsworth lost their Malibu home in the California wildfires just in November. Like the couple they are, the two chose to focus on those helping battle the fires and those affected. They even donated $500,000 to wildfire recovery.

Despite their recent hardship, it appears Cyrus and Hemsworth are moving in a positive direction by focusing on their love for one another. Whether or not they really did get married, there’s no denying the couple enjoyed the holidays and have beautiful photos to remember Christmas 2018 by.