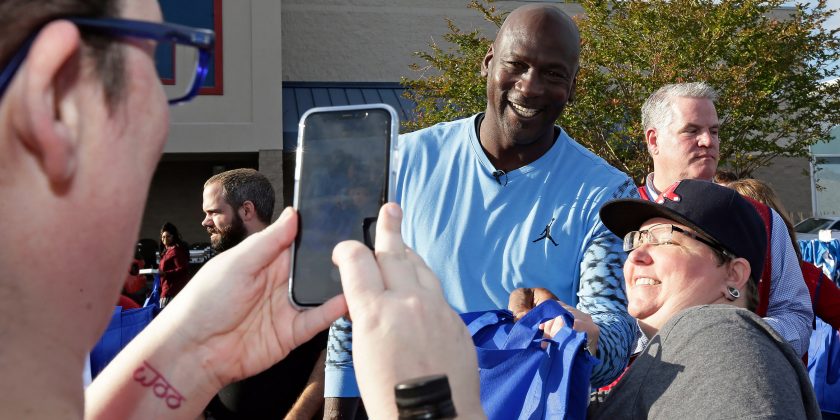 Michael Jordan is giving back to his community.

In September, the basketball icon — who was raised in Wilmington, North Carolina, — donated $2 million to Hurricane Florence recovery efforts. On Tuesday, he headed to the area to meet people still affected by the storm.

Jordan, 55, made two meaningful stops, according to WECT News and the Associated Press: first to pass out Thanksgiving meals at a Lowe’s and then to gift Air Jordans to children at a local Boys & Girls Club.

“I can give money all day long, but at some point you want them to understand you’re human,” Jordan told the AP.

Stephanie Parker, a mom of four whose house flooded and whose car was destroyed, told the AP that Jordan’s presence meant a lot to her.

“At first it was really, really hard to realize that you lost everything,” she said.

“But people like Michael Jordan donating to the Red Cross [and Foundation For the Carolinas’ Hurricane Florence Response Fund] and donating to people who have gone through what we’ve gone through is an incredible blessing. We are so very, very thankful.”

Jordan made just as big an impression on the children he got to know at the Boys & Girls Club, where he spent time as a child.

“The coolest part is that Michael Jordan came, and my brother’s name is Jordan,” Brieyelle, who participates in Boys & Girls Club programming, told WCET News.

RELATED: Meghan Markle Has the Cutest Reaction When a Basketball Player Sneaks in a Kiss on the Cheek

“Once this storm goes away, it’s not going to just end. It’s going to take a while before we get back on our feet,” Jordan told the station during his second stop. “Anything I can do to help my fellow Wilmingtonians, I’m willing to do.”

Hurricane Florence made landfall in the U.S. in September near Wrightsville Beach, North Carolina, and resulted in 51 storm-related deaths, according to Reuters. The hurricane caused billions of dollars in damage and left residents in the Carolinas struggling to rebuild.