Meghan Markle stuns in a $450 Hugo Boss high-neck dress, $900 peach-suede pumps and a $300 saddle bag that has already sold out – as she bids farewell to Australia

The Duchess of Sussex has stunned crowds in another fashion hit – bidding farewell to Australia in a showstopping burgundy ensemble.

Boarding the New Zealand-bound plane from Sydney on Sunday, Meghan Markle stunned in a high-neck Hugo Boss dress, which retails for $450AUD (£249).

The mother-to-be, 37, chose to pair the ankle-skimming number with Aquazzura peach suede pumps that would have set her back $911AUD (£505).

Completing the outfit was a mini chain saddle bag from the brand Cuyana, retailing for around $317AUD (£175). 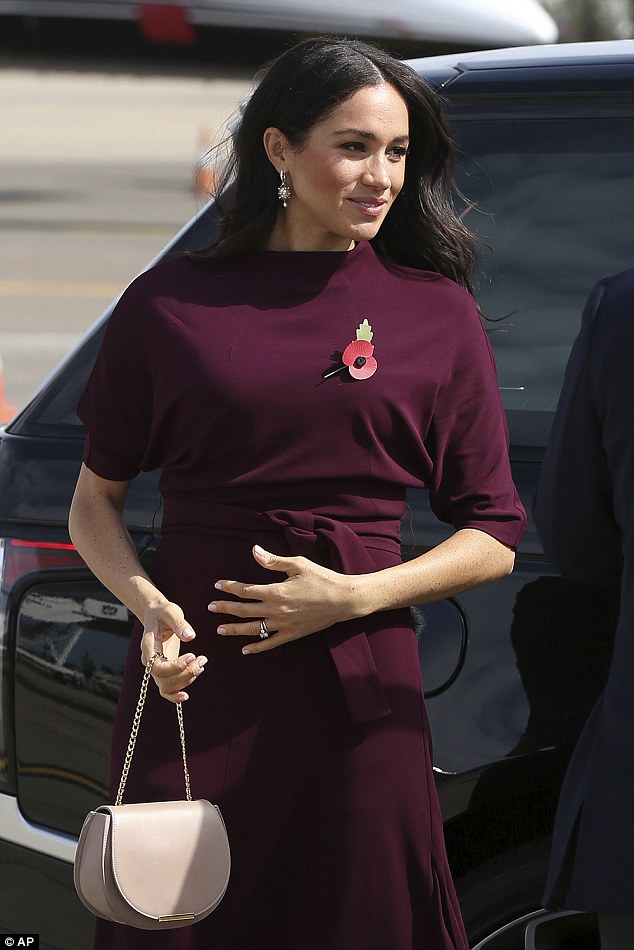 Boarding the New Zealand-bound plane from Sydney, the mother-to-be stunned in a high-necked Hugo Boss dress, which retails for $450AUD (£249) 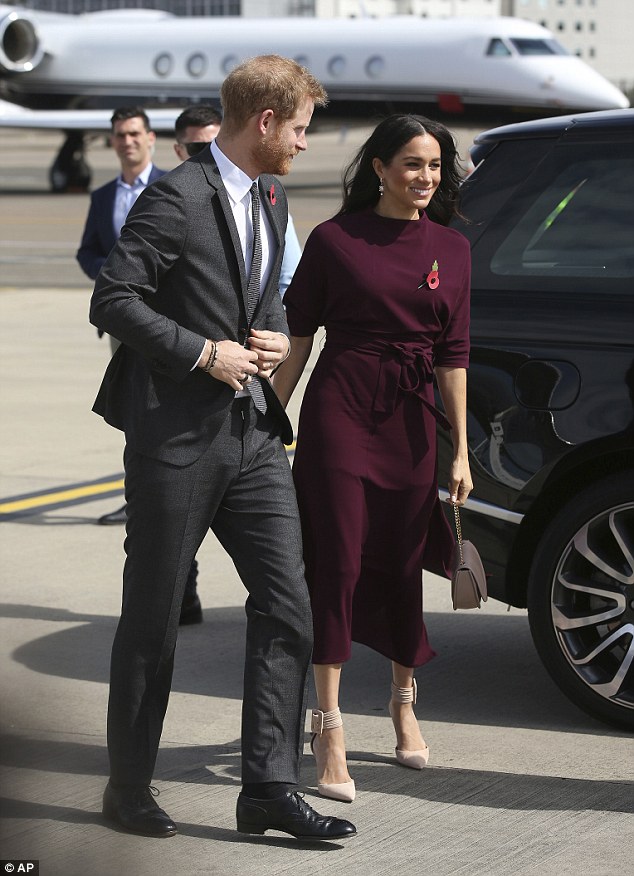 Meghan, 37, chose to pair the ankle-skimming number with Aquazzura peach suede pumps that would have set her back $911AUD (£505)

However, fans hoping to emulate the look had better be quick as the quartz saddle bag has already sold out and the Hugo Boss jersey dress only available on the brand’s website.

Although still out-of-reach to most royal-watchers, the high-necked number is relatively cheap compared to other looks sported throughout the 16-day tour.

In total, the Duchess’ wardrobe is expected to cost upwards of $100,000 from outfits worn throughout her scheduled 76 engagements.

So far, these have stretched across Australia, Fiji and Tonga with Meghan and spending 10 days in Australia and a further four across the Pacific region.

They wound up their official events in Australia at the Sydney closing ceremony of the Invictus Games for war wounded that Prince Harry founded.

The royal couple joined the 12,000-strong crowd on Saturday night in clapping and cheering throughout the two-hour long ceremony that included performances by Perth rock outfit Birds of Tokyo and the gospel singers from the US-based Kingdom Choir who performed at Meghan and Harry’s wedding in May. 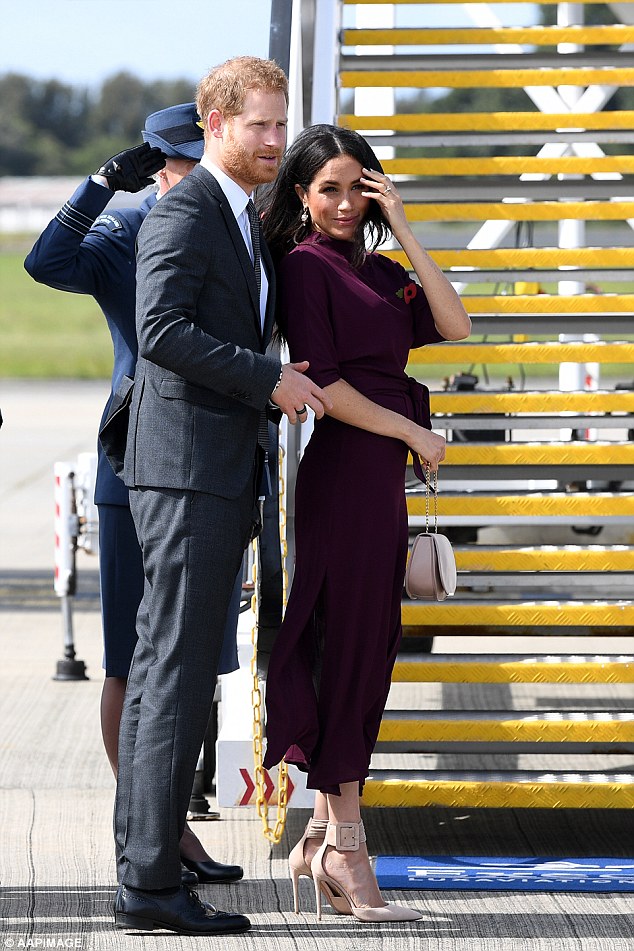 She completed the outfit was a mini chain saddle bag from the brand Cuyana, which retails for around $317AUD (£175) 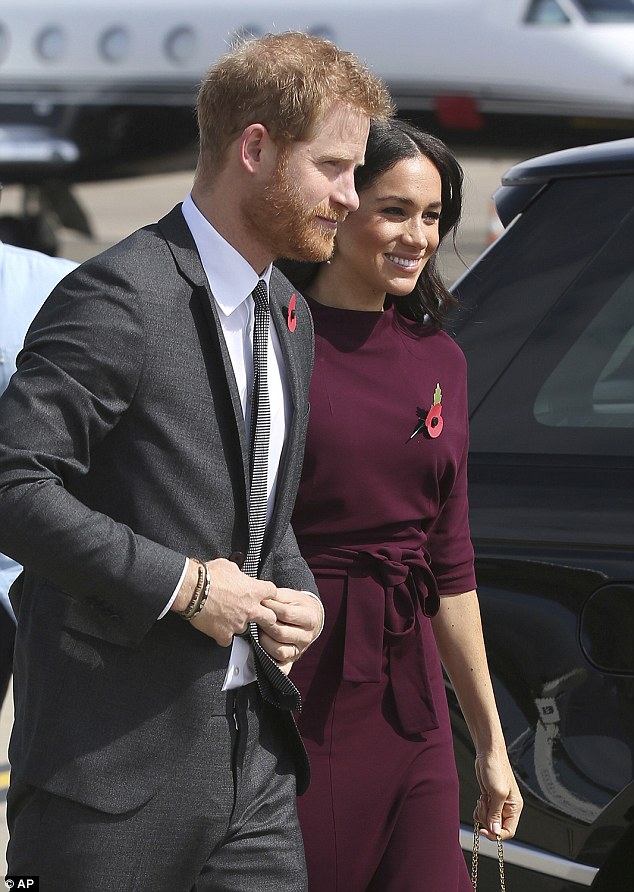 Although still out-of-reach to most Royal-watchers, the high-necked number is relatively cheap compared to other looks sported throughout the 16-day tour

Look gorgeous in a burgundy midi dress like Meghan 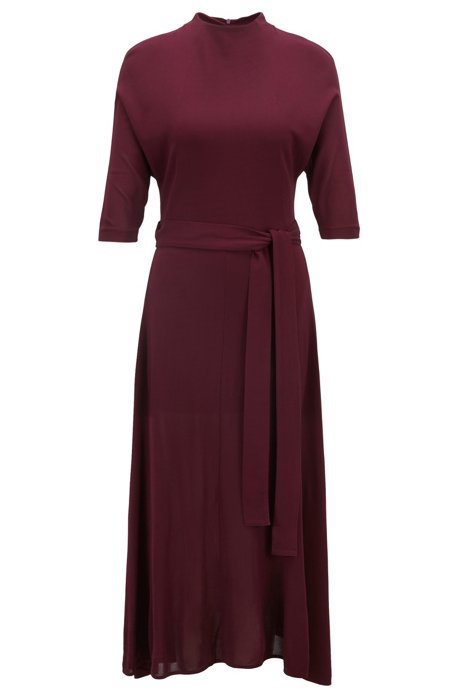 Not available; shop the collection here!

Meghan Markle and Prince Harry left Australia fand a whirlwind tour with the Duchess of Sussex showing us 21 dresses and 14 pairs of shoes. Okay, make that 22 dresses, including the one she wore on Sunday as the couple left for New Zealand. For the occasion, she chose a high neck, three-quarter sleeve midi dress with a detachable belt. The frock was in a burgundy color, a hue Meghan favors and has worn many times before.

This dress is Boss by Hugo Boss, specifically the slim-fit dress in soft jersey. Unfortunately, you can't get it in the U.S. but click right to browse the British version of this site as well as shop the rest of the brand's collection.

We are reminded how lovely a burgundy dress can be for fall. See our carousel for other suggestions on how to emulate Meghan's look. White + Warren and Diane von Furstenberg both have formidable options.

The closing ceremony was the final event on the royal couple’s official itinerary for their Australia visit which included stops in Sydney, Dubbo, Melbourne and Fraser Island.

The Duke and Duchess were farewelled by officials on Sunday morning who thanked the couple for their time in Australia.

But it was a windy goodbye with Meghan wearing a silken burgundy dress and peach suede heels and Harry a dark grey suit. 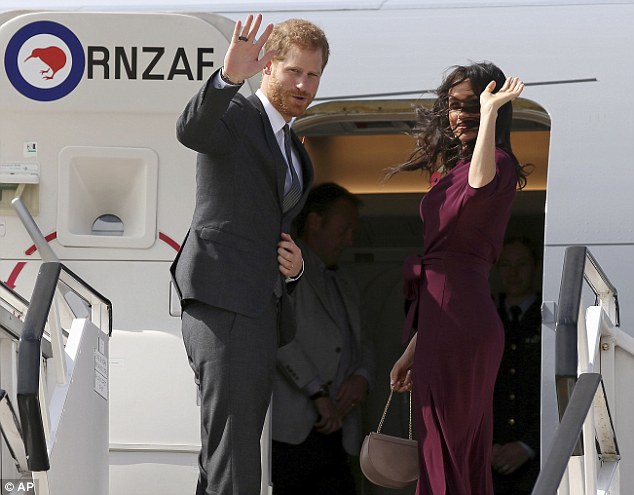 Harry and Meghan, who announced their pregnancy on their first night in Australia a fortnight ago, took a Royal New Zealand Air Force plane for the flight bound for  Wellington, the country’s capital city.

Several members of the New Zealand Invictus Games team were on board the flight, which will be met on arrival by Prime Minister Jacinda Ardern later on Sunday

During their four days in Aotearoa, the Duke and Duchess will visit a kiwi bird breeding centre, see some of the country’s most majestic environs in the South Island’s Abel Tasman National Park, and even join in a gumboot-throwing contest.