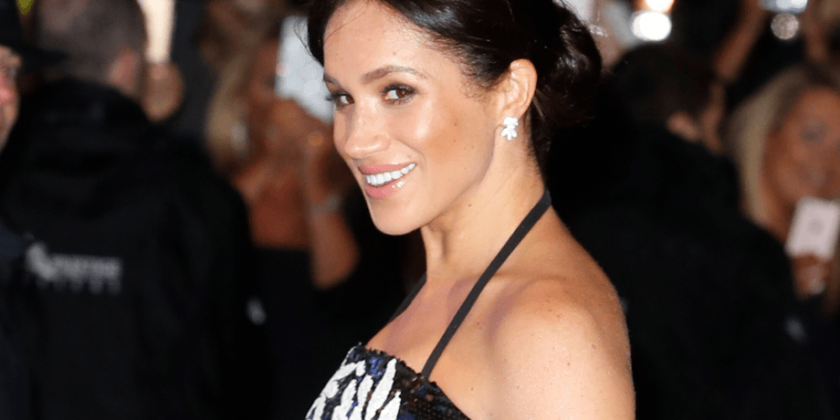 Meghan Markle pushed fashion boundaries during her first international tour with Prince Harry. She wore a dress with an extremely high slit, had a malfunction with a sheer skirt, and didn’t wear hats. Also, the Duchess has been pushing the envelope of what is allowed and not allowed with her share of pants and sleeveless outfits. So it’s believed that Meghan was told “she needs to start dressing less like a Hollywood star and more like a royal,” detailed Cosmopolitan.

So how did Meghan respond to this supposed request? In her first outfit since she was allegedly told to be “more” royal, the Duchess turned up the sparkle, and opted for a sleeveless, halter-strap top. The sequined top was black and white, which she paired with a long black skirt. Meghan looked quite radiant, as her baby bump was on display.

In related news, there have been rumors that Meghan and Harry are losing a slew of aides, some of it due to the former’s fashion choices, detailed the Inquisitr. And while those claims have yet to be substantiated, it appears that Markle is determined to maintain her fashion voice. After all, as a royal she no longer has the means to express herself on social media or on a blog like she used to. So now, her wardrobe choices may be the only means she has to express herself outside of planned speeches.

And it’s not like Meghan hit the ground running with her Hollywood-inspired looks as a royal. I’m fact, her wedding dress was arguably conservative along with her first outfits.

Only time will tell as far as how the Duchess’ wardrobe may evolve. But if the reports are true that the Queen is not pleased with the riskier ensembles, Meghan might be changing up her looks in the future.

“Meghan seems like something out of an old movie. Why in 2018 are we dressing like the 1930s? Why do they have to cover their knees?”

At the time, Thomas had other concerns also about how unhappy his daughter appeared to him.

“This one isn’t even a stage smile. This is a pained smile. That might be just having a couple of bad days. I don’t know. It really worries me. I think she’s under too much pressure. There’s a high price to pay to be married to that family.”