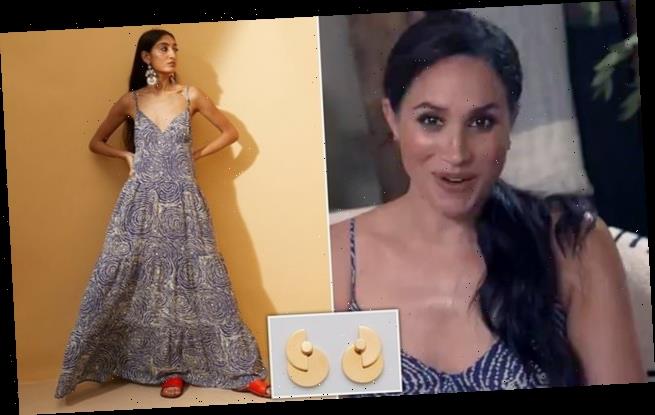 The Duchess of Sussex donned a dress by an African-American designer who focuses on ‘the health of people and the planet’ as she discussed ‘courageous leadership’ during a virtual summit yesterday.

Meghan Markle, 39, joined  Fortune’s Most Powerful Women Next Gen Virtual Summit from her $14 million mansion in Santa Barbara and insisted that all social media users are like ‘people who are addicted to drugs’ – despite spending many years as a prolific Instagram user.

The mother-of-one, who is known for her love of designer brands and rarely wears the same outfits twice, looked elegant in a blue and white strappy dress from African American designer Tracy Reese’s sustainable label Hope for Flowers for the occasion.

Tracy is a favourite among celebrities including Michelle Obama and Oprah Winfrey, with her sustainable brand focusing on ‘the health of people, planet, and equity in profit.’

Appearing on the call, the Duchess swept her hair from her face into a messy side ponytail to reveal dangling $195 recycled brass earrings by female-owned jewellery brand Cuyana. 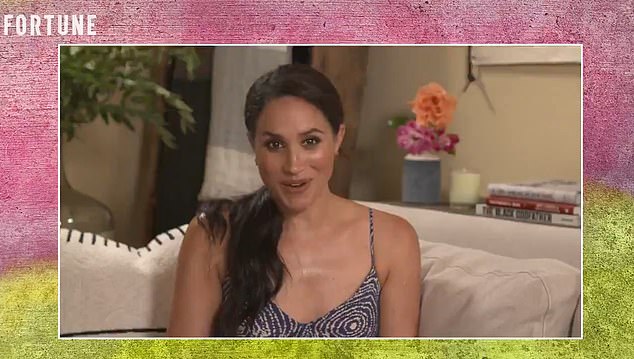 The Duchess of Sussex, 39, donned a dress by Tracy Reece’s Hope for Flowers label, which focuses on ‘the health of people and the planet’, as she discussed ‘courageous leadership’ during a virtual summit yesterday

Tracy Reese is described online as having a ‘reputation in the fashion industry as not only a leading talent, but a champion for diversity and inclusion.’

Her label, Hope for Flowers, is described as being ‘designed for women who are inspired by beauty’ and ‘also desire to use their power as consumers to be agents for positive change in the world.’

The designer is a celebrity-favourite, with Meghan’s friends Michelle Obama and Oprah Winfrey previously wearing her gowns.

The Duchess has long-been a fan of the designer, having attended fashion shows for Tracy in 2013 when she was still working as an actress. 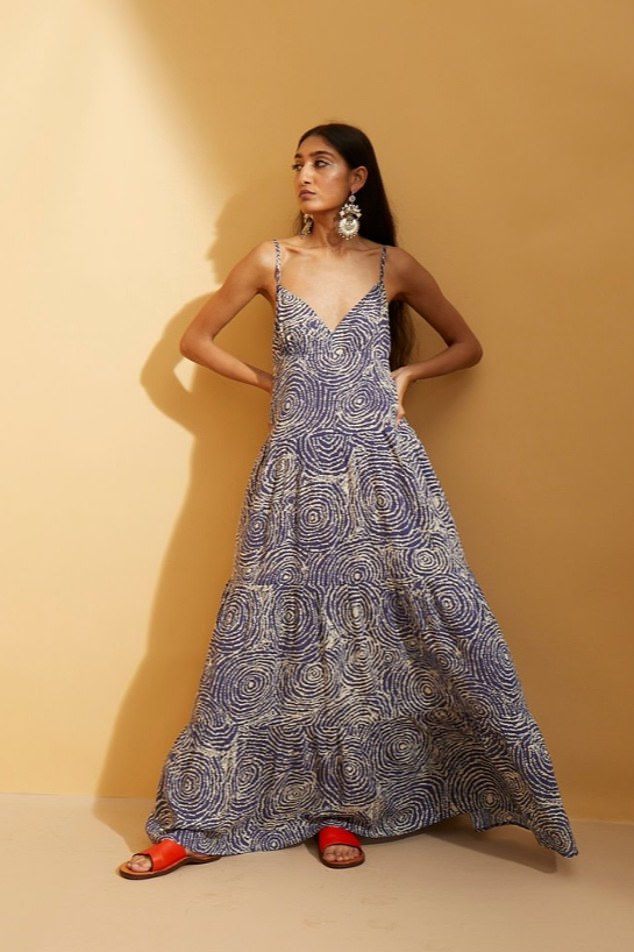 Meghan Markle opted for the maxi-dress, which features a blue and white swirling pattern, for the virtual meeting yesterday (pictured, the dress) Meghan paired the distinctive dress with a set of $125 earrings by Cuyana, which are made in New York.

The jewels are described online as one of the brand’s ‘signature gold dot and geometric shapes’ and ‘just as versatile as they are sophisticated’.

A three-piece system allows the earrings to be worn in a variety of different ways.

It marks the first time the Duchess has worn jewels by the company, which are crafted sustainably from recycled brass.

Meghan drew the bold comparison between drug addicts and social media users during her virtual appearance at the Fortune summit on Tuesday afternoon – an online event that was reserved for invited guests willing to pay a $1,750 fee. 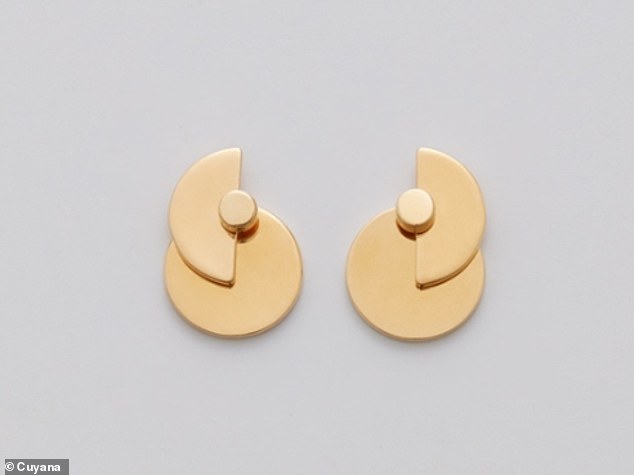 Meanwhile the Duchess paired the garment with $195 Luna Ear Jacket Earrings from Cuyana, which is a female-owned jewellery brand based in New York

‘There is something algorithmically that is in there that is creating this obsession that I think is very unhealthy for a lot of people.

‘I have a lot of concerns for people that have become obsessed with it and it is so much a part of our daily culture for so many people that it is an addiction.’

Meghan added that she believes social media had the ‘same capacity’ for causing addiction as drugs do.

Her comments closely echoed sentiments voiced in recently-release Netflix documentary The Social Dilemma, which also drew comparisons between social media users and drugs addicts – pointing out that the algorithms used by networks are designed to draw people in and encourage addiction.

Meghan drew the bold comparison between drug addicts and social media users during her virtual appearance at the Fortune summit on Tuesday afternoon – an online event that was reserved for invited guests willing to pay a $1,750 fee

Interestingly, the Duchess of Sussex seemed to set herself apart from this group, telling Fortune associate editor Emma Hinchliffe that she has ‘not been on social media for a very long time’ – despite sharing an official Sussex Royal account with Prince Harry for several years before they stepped down as senior royals.

Prior to meeting her now-husband Harry, 36, Meghan also spent many years managing her own personal social media accounts, which she often used to promote her work as an actress, as well as her now-defunct lifestyle blog The Tig.

She shared many personal aspects of her life – including food photos and vacation snaps – and even alluded to her relationship with Prince Harry in its earliest days by sharing a photo of love hearts soon after the couple met for the first time.

When she took the decision to close down her social media accounts in 2018, after announcing her engagement to Prince Harry – Meghan had amassed 1.9 million followers on Instagram, and she also had an official Facebook and Twitter page that were both closed at the same time.