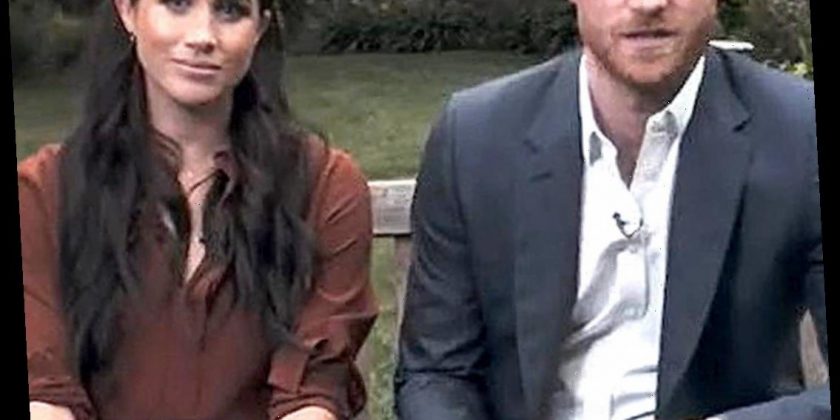 The Duke and Duchess of Sussex stressed the importance of rejecting "hate speech" and "misinformation" online during a virtual appearance on ABC's Time 100 special.

Meghan Markle and Prince Harry are continuing their fight against a divisive digital landscape.

The Duke and Duchess of Sussex stressed the importance of creating a kinder, more tolerant online world during an appearance on ABC's Time 100 special on Tuesday, Sept. 22. Meghan and Harry also had the upcoming presidential election on their minds as they urged viewers to register to vote.

"We're six weeks out from election day, and today is National Voter Registration Day," Meghan shared. "Every four years, we're told, ‘This is the most important election of our lifetime.' But this one is. When we vote our values are put into action, and our voices are heard."

Harry added, "As we approach this November, it's vital that we reject hate speech, misinformation, and online negativity. What we consume, what we are exposed to, and what we engage with online, has a real effect on all of us."

Changing how social media users interact with each other, Meghan said, starts with "seeing the world the through lens of community."

As she described, "Good neighbors look out for each other, protect each other and keep each other safe. Good neighbors also ensure that we are informed with facts and not fiction about our communities and the issues that affect us."

Vanessa Bryant Fires Back at Her Mom's "Hurtful" Interview Claims

Lauren Conrad Reveals Why She Distanced Herself From The Hills

The British royal and his wife of more than two years have long been critical of the media, especially as they wage an ongoing legal battle against the paparazzi and British tabloids.

From Harry's perspective, the couple's impassioned call to action comes from not only their experience as public figures, but as global citizens.

"Once you see that many of the world's greatest issues are being inflamed by the online space, you realize you need to do something," he said, later adding, "Tonight reminds us of how important it is to watch out for each other, to care for each other and to inspire each other."

Meghan and Harry shared their message from their new home in Montecito, Calif. At one point, their dog could be seen walking past the camera through their expansive backyard.

For the first time ever, TIME magazine's roundup of the year's most influential people is being revealed during a prime time special on ABC. Honorees include Michael B. Jordan, The Weeknd, Jojo Siwa, Billy Porter, Megan Thee Stallion, Selena Gomez, Gabrielle Union, Dwyane Wade, J Balvin and Jennifer Hudson.