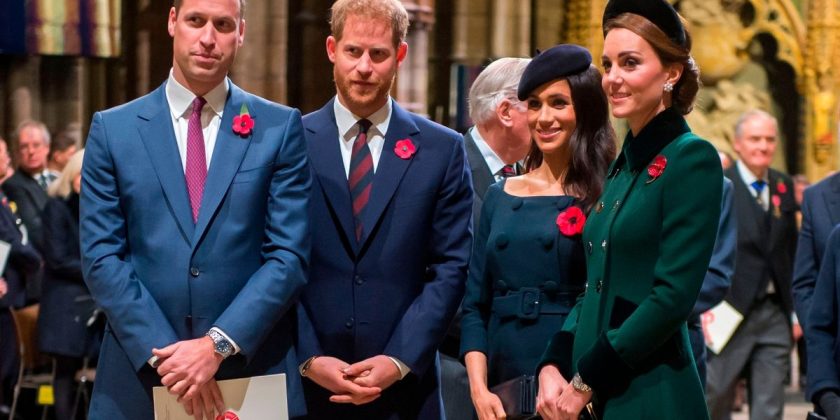 Meghan Markle and Kate Middleton’s ‘difficult relationship’ has been the subject of much speculation for weeks now.

Newlyweds Meghan and Harry will reportedly not spend Christmas with Kate and William following rumours of a rift between the sisters-in-law.

It was thought the frostiness between the Royal ‘Fab Four’ had been caused by disagreements between to two Duchesses.

But new revelations suggest it’s actually the BROTHER’S increasingly strained relationship that’s at the heart of the division.

Harry is even believed to have accused his older brother of trying to wreck his relationship with US actress Meghan. The rumours come just two weeks after Harry and Meghan unveiled plans to move out of Kensington Palace – where the Cambridges also live – and relocate to Windsor instead.

From the two young boys once united by tragedy, to rivals increasingly divided in love, things have never been worse between the pair, The Sun reports.

According to the source, Diana’s boys started squabbling back in 2016 when 37-year-old Meghan first began dating Harry, 34.

Prince William is said to be incensed by his younger brother’s over-protectiveness of Meghan and his failure to see reason with her.

“He will brook absolutely no criticism of Meghan — and he is so sensitive he often sees criticism or negativity where there isn’t any,” a source told The Sun. Just as any other brothers, the pair have a long history of tiffs, tantrums and sibling rivalries.

William, 36, was said to be furious with Harry back in 2012 when he was secretly filmed stripping naked in a Las Vegas hotel room.

The pair are also notorious for teasing one another about who’s got the least hair, and who’s the better soldier.

But more famous than their fallings out was their unity in through the toughest times.

And now that bond is now said to be hanging by a tether.

The first of the threads allegedly snapped after William was first introduced to Meghan, and, shortly afterwards, offered Harry some unwelcome brotherly advice.

A Sun source close to the Royal Family has said: “William told his brother they knew nothing about her background, her intentions, what she was really like.

“He just wanted to stress that becoming part of the Royal Family is a massive undertaking and the pressure and scrutiny is unrelenting. Was Meghan the right one?

“Harry went mental, he accused his brother of trying to finish his romance before it had begun.

"The brothers’ relationship has not really recovered.”

However, it’s said William wasn’t the only to voice his concerns over Meghan, with similar sentiments echoing down from the upper echelons of the monarchy.

Another courtier said: “A lot of people in the family objected.

"Who really knows what the concerns were? Was it Meghan’s background? Her father and dreadful half-sister? Because she was an outspoken American? Divorced?

“Harry stood up for Meghan very forcibly. He really loves her.”

The Middleton’s were also slow to reach out a hand to Harry’s significant other, who voiced concerns over inviting Meghan to Pippa’s wedding last May, in fear she’d overshadow the bride-to-be’s big day.

Eventually she was asked but only opted to attend the evening reception. Hoping to make amends when she moved to London last November, engaged to Harry, Meghan reportedly tried desperately to integrate herself with her in-laws.

Hoping to be taken under Kate’s wing, the Princess was left disappointed to find Kate – suffering from motion sickness from her pregnancy with Louis, and looking after George and Charlotte – too busy to spend time with her.

A royal source said: “Meghan hoped Kate would show her the ropes. But, equally understandably, Kate was busy.

"She didn’t have as much time for her as Meghan would have liked. They were at very different places in their lives.

“Meghan felt quite let down. She had really tried but felt rebuffed, and so just stopped trying.”

Harry did not take this lightly and spoke to William about making Meghan feel welcome.

William, however, took his wife’s side.

In February, the quartet appeared on stage together for the first time to talk about their Royal Foundation charitable work.

Host Tina Daheley asked: “Working together as a family, do you ever have disagreements about things?”

When asked if they’d been “resolved”, Will laughingly replied: “We don’t know!”

This week, the brothers sat down together to synchronise their diaries for next year, showing maybe not all love has been lost by the pair.

But just like the centuries-old oil paintings embellished on the walls of Buckingham Palace – the cracks are beginning to show.