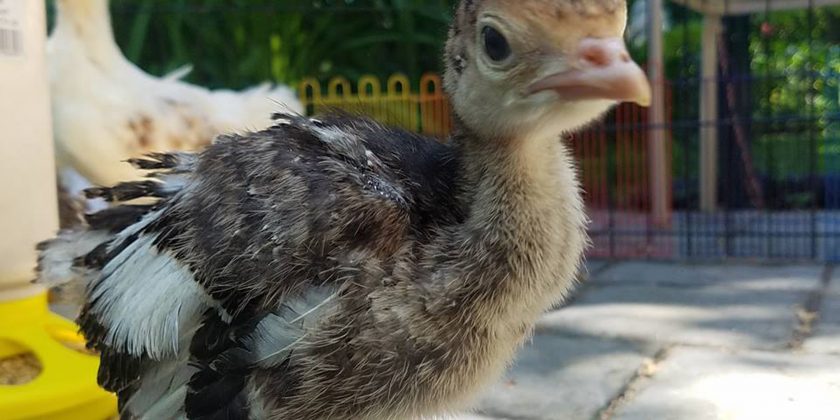 Mayflower the turkey is one happy Pilgrim this November. Born in May — hence the name Mayflower, not to mention a certain famous ship — the young poult was discovered at a Pennsylvania auction and was this close to being shipped off for slaughter. Fortunately, fate intervened in the form of PETA and a group called Long Island Orchestrating for Nature (L.I.O.N.), which rescued the baby in early July, along with dozens of other birds whose lives were at risk.

Once rescued by the group, avians are temporarily fostered with L.I.O.N. volunteers, then brought to Broome Animal Sanctuary in Middleburgh, New York, where they’re quarantined and checked out by a vet. After the birds are in the clear, they get introduced to other animals and can join the flock of their choice.

Sadly, three of Mayflower’s siblings were very sick with extreme parasite overload and died. Young turkeys are quite susceptible to disease, and the sanctuary was not sure if Mayflower would survive. Luckily, with a lot of T.L.C. and medical treatment, Mayflower pulled through. “Mayflower will now be safe forever,” say Greg Gude and Tony Frier of Broome Animal Sanctuary.

At first, the young turkey was much smaller than the pair of lady chickens, Lucy and Ethel, whom he went to roost with at the sanctuary. Now, the handsome 6-month-old turkey has really blossomed; he’s grown huge, in fact, and is twice the size of his hen girlfriends.

The trio is inseparable, whether they’re foraging for grub in the grass, eating fresh fruits and veggies (diced tomatoes are Mayflower’s favorite!) or cuddling up for naps. Every night, the birds roost together. Mayflower even welcomed a new little hen, Pip, under his wing recently. She had been picked on so badly by other chickens, her skull was exposed and she couldn’t walk. Vets thought she might never walk, but physical therapy and the support of her new flock have proved the doctors wrong.

While Mayflower is quite content with his current feathered family, the sanctuary’s turkey population is growing. Broome has taken in six turkeys over the past six months, including a male named Eddie Vedder and a beautiful solid white female turkey named Snow White. They’re currently living separately due to quarantine, but as soon as their medical care is complete, Gude and Frier tell PEOPLE they hope the birds will “become a happy flock next spring.”

“Snow White is such an affection turkey, and we think she and Mayflower would be a beautiful couple,” says Frier.

Mayflower and the rest of Broome’s birds are the lucky ones. They will live out the rest of their natural lives at the sanctuary and never have to worry about the slaughterhouse again.

However, Mayflower does have a worrisome issue that Gude, Frier and a veterinarian are watching closely. Recently, Mayflower was diagnosed with a condition that could cause him to lose the use of his left leg. Basically, he’s growing so fast, there’s a possibility his leg won’t be able to support the weight of his body. This often happens when birds are bred for food. For now, the care staff is doing everything possible to give Mayflower the best quality of life. They are being proactive, staying on top of his X-rays, and if needed, they will fit Mayflower with a prosthetic to help him walk.

Being able to walk, run and flap his wings is important for Mayflower’s well-being, as for all birds. “He comes running anytime we whistle for him in hopes that we have [his favorites] tomatoes or Cheerios or just to give him a scratch on the back,” Frier tells PEOPLE. “Mayflower never met a tomato or human that he didn’t like.”

There’s an old farmer’s tale that turkeys are not smart or affectionate. According to Gude and Frier, that is far from the truth. In fact, turkeys are very intelligent. Mayflower keeps an eye on the sky, watching for predators so he can keep his chicken friends safe. He’s also looking for signs of rain or snow (he’s not a fan of snow). Mayflower experienced his first snowfall last week, “sitting in the doorway under the heater with his little friends watching the snowfall while enjoying a bowl of his favorite, diced up tomatoes,” says Frier.

“While others are home serving turkey as the main course we will celebrate by serving turkeys whatever they want. ‘Friends don’t let friends eat other friends’ is our motto,” they say. And Broome Animal Sanctuary has a lot of friends; their very first rescue and Goodwill Ambassador Wattles the Pig has close to 3,000 followers on Facebook. Another rescue success story!

“Mayflower was saved before he could end up as a Thanksgiving table centerpiece, and he inspires us to work hard to spare other lovable birds just like him who are waiting for their lucky break this year,” says PETA President Ingrid Newkirk. “PETA hopes this turkey’s sweet story will inspire people to choose delicious vegan meals for the holidays and all year round.”