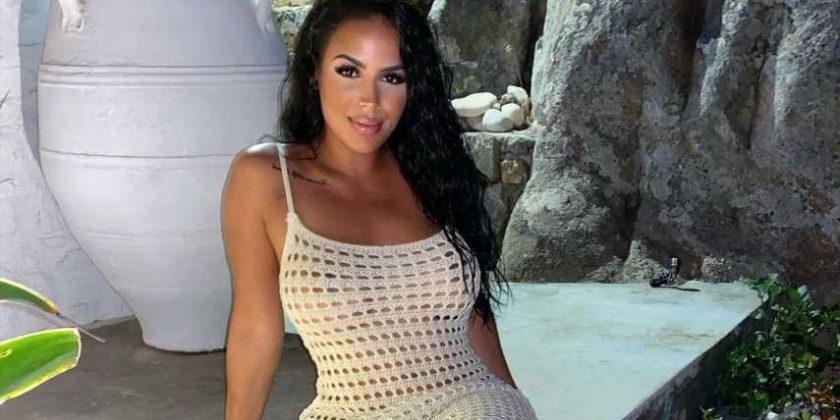 Kanye West and Kim Kardashian announced their split in May 2021 after seven years of marriage. While West held hopes to reconcile with Kardashian for the sake of their children, however, the star has already begun dating different women. After having a brief relationship with Italian-American actress and model Julia Fox from December 2021 until February 2022. West has now linked to Chaney Jones. The couple was first spotted shopping in Miami and taking a vacation during the first week of their relationship. Eagle-eyed fans quickly compared the new partner’s looks with his ex-wife Kim Kardashian. The stars also have a similar dressing style and fashion sense, along with their face structure.

There is a lot more to Chaney Jones than meets the eye. She is a student and businesswoman pursuing her studies in behavioral health. While she has suddenly entered the limelight for dating Kanye West and her Kardashian look-alike face structure, let’s take a closer look at who Chaney Jones is.

A Bright Student And Businesswoman

A combination of beauty and brains, the 24-year old Chaney Jones completed her elementary education at the University of Delaware, where she found herself interested in counseling people and focusing on their mental health. According to The Sun, she is currently pursuing her Master’s degree in Counseling from Wilmington University in New Castle, Delaware. A believer in helping people through behavioral health treatment, Jones has plans to make a career from her passion for helping people. She is actively seen on social media, urging people to sign up for telehealth and counseling services that can help them stabilize their personal and professional lives through proper diagnosis and guidance.

While she is still a practicing student, Jones is not one of the therapists yet. However, she handles the day-to-day services and routine of the practice. Along with studying in Delaware, she is the COO of First State Behavioral Health, a practice that offers a myriad of mental health services to people in Delaware, as noted by Cosmopolitan. Also, the company offers four types of approaches: Cognitive-Behavioral, EMDR, Intervention, and Solution Focused Brief, respectively. In November 2021, the company opened its second practice in Atlanta, Georgia, and it offers a similar range of services as the Delaware practice.

Enjoying Life To The Fullest

While the model was shy until her school years, her glow-up during college made her Instagram account generate a hefty amount of fan-following. She utilized her platform to share snippets of her private vacations and spread awareness about mental health. While working as the COO and pursuing her Master’s in counseling, she takes much-needed vacations between her breaks. As shared on her social media, the model has traveled to several destinations across America to enjoy the beaches and nightlife with her friends.

While Kanye West had separated from his wife and was in an open relationship with Julia Fox, he got spotted with the model on multiple occasions. The pair were first seen together in Los Angeles in February 2022 at the favorite celebrity restaurant Nobu, and she was a part of several DONDA 2 listening parties. At one of the listening parties, Jones wore the Balenciaga leather boots that West had initially purchased for Kardashian, which created a buzz about them as a couple, as stated by Page Six.

A Muse For West

Many dark-haired models look similar to Kim Kardashian, but Chaney Jones has a distinctive style identical to the reality star. Her fashion choices and curated outfits remind people of Kardashian’s sense of fashion. There are speculations that the couple isn’t in an exclusive relationship; however, their romance seems to be going steady as they are spotted attending various events together. She has been supportive to him while Kardashian and West have taken their marriage dissolution to court. As mentioned by Elle, Kardashian recently shared a statement to the court to restore her status as a single woman.

Amid the divorce proceedings, Jones and West have dropped hints about their romance through social media. The influencer posted a photo on Instagram and captioned it ‘His muse,’ referring to herself being an inspiration for West. The rapper re-shared a post by The Shade Room that detailed their budding romance on his Instagram story. While Jones lives in Delaware and Kanye West stays in LA to be closer to his kids, the couple seems to be finding enough time to stay together.

Kanye West is known to sustain the limelight on him; even though the rapper has a lot of drama surrounding him, he seems to be enjoying the company of Chaney Jones, who comes from a different spectrum of Hollywood. Her looks similar to Kim Kardashian could be Kanye West’s new muse.

READ NEXT: These Celebrities Spend Fortunes On Richard Mille Watches