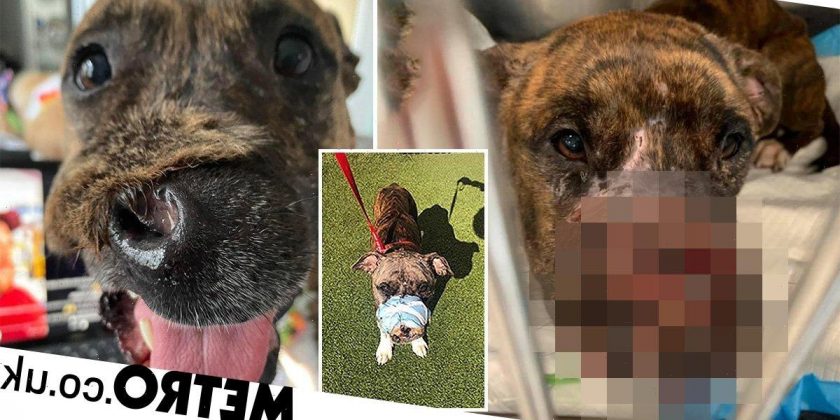 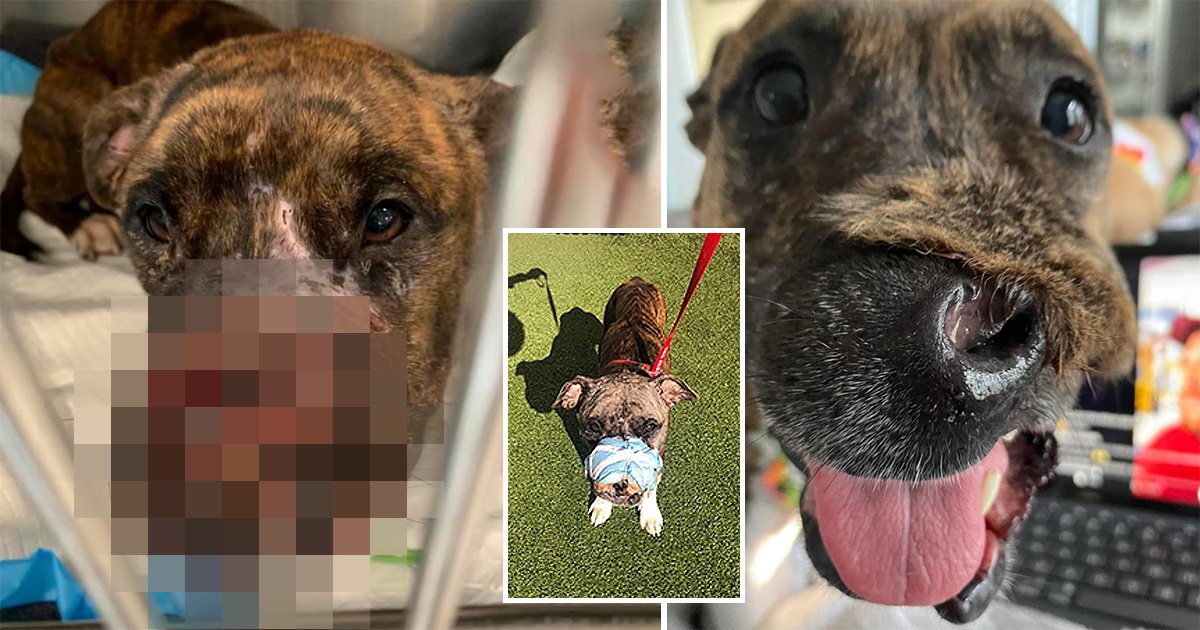 This is Amber, the adorable rescued bait dog who’s only got one nostril.

She’s flourished since she was found wandering down the side of a road in South Carolina, but Amber’s start in life was a cruel one.

It’s suspected that she was used for dog fighting – which is illegal in the UK and all 50 states of the US – as she was found in a terribly disfigured state.

Her face was torn to ribbons and her wounds had become infected.

Amber was rescued by Rescue Dogs Rocks NYC and taken to the Columbia Veterinary Emergency Trauma and Speciality unit to tend to her wounds and nurse her back to health.

First, staff needed to clean her wounds, which revealed that her nasal passage was almost completely missing, and the skin and tissue were damaged beyond repair.

Surgical vet nurse Nikki Phillipp and her partner Mark Phillipp, who have fostered Amber, said: ‘Amber was found on the side of the road in a very rural area of South Carolina at the end of September 2020.

‘She was severely underweight, and her face was torn to pieces and incredibly infected.

‘She wasn’t spayed and was heartworm positive. She was presumed to be a bait dog.

‘An amazing rescue organisation took Amber’s case and truly wanted to save this girl.

‘They went above and beyond to make sure she had the best care possible.

‘They sent her to CVETS (Columbia Veterinary Emergency Trauma and Specialty) to get her the best emergency and surgical care possible.’

Little Amber ended up needing a lot of surgery to fix the damage done to her face.

In May 2021, she was also diagnosed with inflammatory bowel disease, and staff found she had a hiatal hernia following an endoscopy.

Her stomach needed to be tacked to stop it from twisting and a similar problem reoccurring.

On top of her physical health problems, Amber also suffers from severe separation anxiety. She’s receiving medication for this as well as specialised training.

‘Her journey started with a surgery that consisted of cleaning and debriding the face wounds, this showed us the extent of the damage, which was that her nasal passage was almost non-existent. The amount of skin/tissue that was damaged was too much to repair on its own.’ said Nikki.

‘She needed multiple surgeries to correct these issues. She had five days in a row where she was anaesthetised to change her wet to dry tie-over bandage that helps what tissue was left to granulate and create healthy tissue edges.

‘After there was enough healthy tissue, the surgeon took a flap of skin from her neck and placed it on her new healthy tissue, and he tried to create two new nasal passages, so she can breathe through her nose, but only one is able to be used properly.

‘After two weeks, she had her sutures removed and looked great.

‘She needed to gain weight and was needing to be hand-fed three times a day until she was able to eat on her own.

‘She was diagnosed with IBD (inflammatory bowel disease) She is on a couple of medications and on prescription food for the IBD.

‘She also suffers from major separation anxiety; she is on medication for that as well as she is being trained and on CBD chews.’

Thankfully now, two years since her rescue, Amber is thriving.

As well as a loving home, she’s also got two new canine brothers to hang out with, as well as scores of followers on Instagram whose hearts she’s well and truly stolen.

‘She is now 40lbs and has all the energy in the world.

‘She lives her best life in NC with her two rescue doggie siblings Alice (the Boston Terrier) and Jack (the yellow lab) Her best friend.

‘She is now eating well on her own and continuing to gain weight.

‘Rescue Dogs Rock NYC has been amazing throughout the entire process. They covered her vet bills which were very large. Please consider donating if you can.’