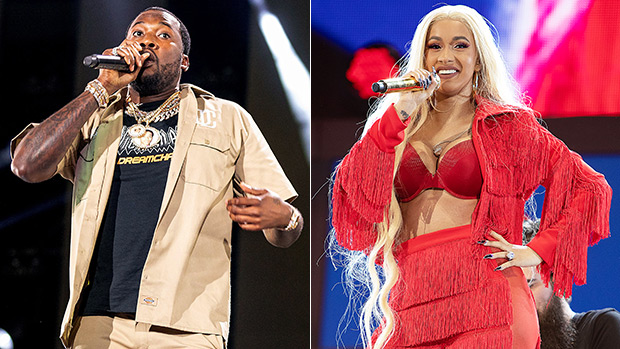 He may have once dated Nicki Minaj, but that’s didn’t stop Meek Mill for enlisting her enemy, Cardi B, for his latest album. Some fans are hearing disses in-between the lines!

Okurrr! Cardi B, 26, is just one of the superstars to pull up for an appearance on Meek Mill’s new Championships album. The rapper’s latest record dropped on Nov. 29, and we can only imagine what Nicki Minaj thinks of the tracklist. Seeing as she previously dated Meek, it’s the ultimate shade to see him enlist her archenemy for the track. Nevertheless, “On Me” is a bop, and fans freaked over the collaboration! “WTF THIS MEEK MILL AND CARDI SONG SO HARD,” one fan tweeted immediately after the album dropped. Another listener tweeted, “This meek mill x Cardi B record is CRAZY 🔥🔥🔥🔥🔥.”

Cardi’s verse on the track hits hard, but after taking a close look at the song’s lyrics, some seem to think they are aimed at Nicki! “Believe me, I’ve heard of the mumble / I’m just gon’ leave it alone / ‘Cause I would put burners to bundles / B**ches are miserable, they are so typical / Hating is cheap, not my material,” Cardi rapped. Although the “Bodak Yellow” hit maker didn’t name drop, some fans claimed that Cardi was indeed calling out her rival, Nicki. “She right by calling her a hater🤠she been jealous of cardi ever since bodak yellow went #1,” one fan tweeted. Another fan thought Cardi was being too subtle! “Cardi took shots at Nicki. We want a full diss track,” the listener tweeted. “Sublims/Sneak disses won’t do it 🙄.” But once again, Cardi may very well be rapping about other haters!

Meek’s new album is chock full of celebrity collaborations, and features a slew of the biggest artists in the game! Rick Ross, Jay-Z, Kodak Black, Ella Mai, Drake, and more also appear on the record! Oh, and if a certain tune off the record sounds familiar, it’s because the rapper sampled Beyoncé’s classic 2003 single “Me, Myself and I.” The dynamic album serves as the rapper’s first since he was released from prison last April, so it marks an important milestone for the musician.

It’s hard to pick a favorite track from Championships when all 19 tracks are pure perfection, but Cardi’s verse definitely packs a punch here.