A new documentary examining moral campaigner Mary Whitehouse has divided opinion after revealing how she predicted the corrosive impact of online pornography.

Banned! The Mary Whitehouse Story, which aired last night on BBC, detailed how the former Midlands housewife raged against an increasingly permissive society in the 1960s and 70s.

Whitehouse was a Christian fundamentalist who harbored various bigoted views, campaigning against social liberalism, feminism and the gay liberation movement throughout her career.

While several felt there was no way of ‘rehabilitating’ the image of someone with such extreme views, others were surprised at how ‘valid’ her views were when it came to ‘pornography, exploitation and exposure to minors’. 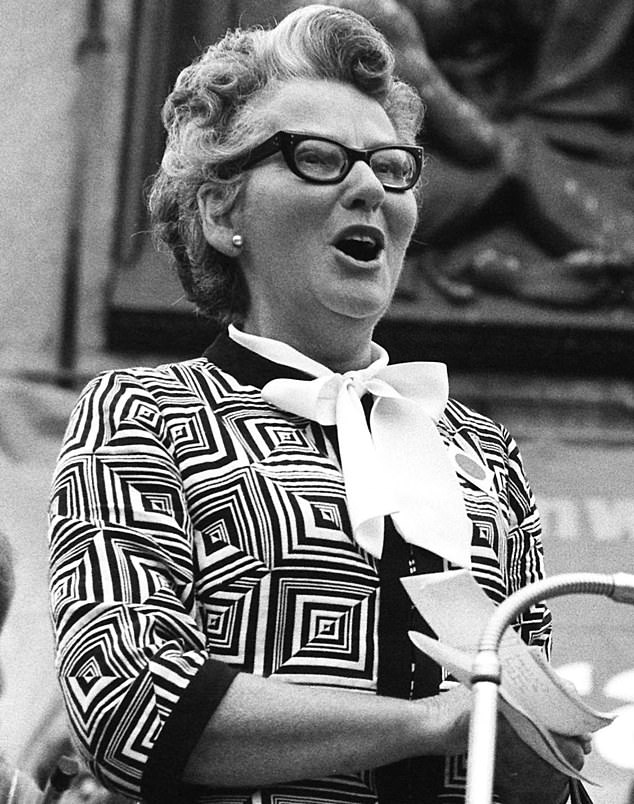 Mary Whitehouse was a Christian fundamentalist who harbored bigoted views, campaigning against social liberalism, feminism and the gay liberation movement throughout her career 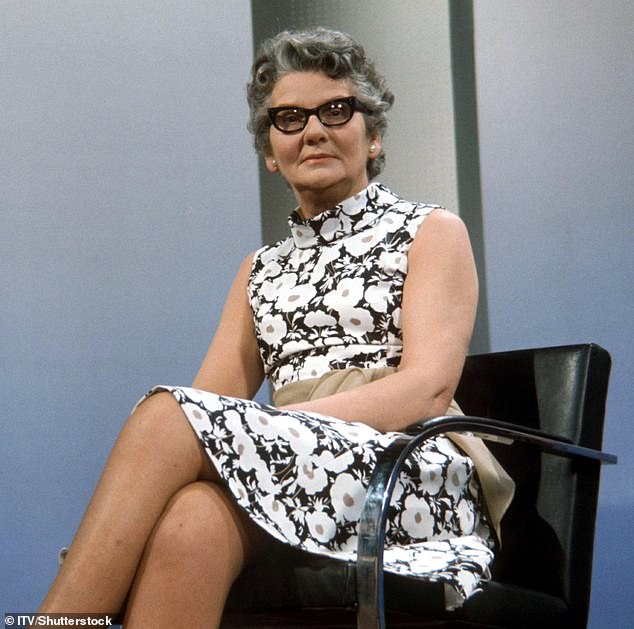 Banned! The Mary Whitehouse Story, which aired last night on BBC, detailed how the former Midlands housewife raged against an increasingly permissive society in the 1960s and 70s

‘Insightful Mary Whitehouse prog,’ said one viewer. ‘To my mind, mostly her own set of misguided morals, but good work for protection of children, women, & abuse elsewhere. ‘

‘The BBC Mary Whitehouse documentary is fascinating. In one recording she tells the Cambridge Union that pornography is made by men for men and degrades women. All the patrician liberals are shown smirking in a knowing fashion: yet today it is she that sounds like the feminist’, wrote another.

A third said: ‘Anyone see the programme about Mary Whitehouse last night? It was interesting, she was a complete religious nutjob but her stance on pornography, exploitation and exposure to minors was valid.’ 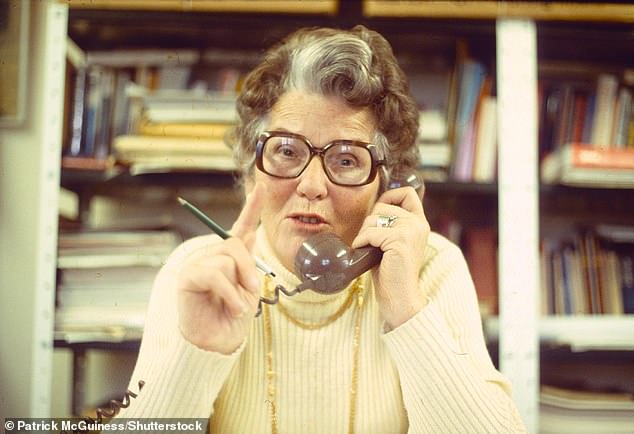 By 1963, Mary had set out on a mission to halt the liberal agenda, with the BBC and their new modern agenda her first target. She is pictured in 1981

In 1960, Whitehouse was working as an art teacher at a secondary school in Telford and was married to Ernest Raymond Whitehouse, who she met at a Christian meeting.

One of Mary’s former pupils, Lorraine, recalled a sex education lesson led by the teacher, revealing: Sex was never mentioned. It was never regarded as something you did until you were married. She stuck to what it said in the bible basically’.

Gyles Brandreth, who worked alongside Whitehouse on an inquiry on pornography led by Lord Longford, shed some light on the increasing sexual liberation arising in the 1960s.

‘I was really quite sympathetic to the end of censoring plays, I was for the publication of Lady Chatterley’s Lover I was hang loose, be free. I wasn’t a hippy but I was happy that some people were’.

By 1963, Mary had set out on a mission to halt the liberal agenda, with the BBC and their new modern agenda her first target.

Journalist Mary Kenney explained: ‘She was alarmed by the new agenda of the BBC, what they called the new morality. I think she did understand how powerful television was.’

Former Chairman of the BBC Michael Grade added: ‘As the 60s sex drugs and rock and roll began to roll out across the world, Hugh Greene, the director general of the BBC, was really smart in latching on to this mood change’.

‘BBC’s programmes started to reflect the real world rather than the cozy, middle-class world’.

In January 1964, the Mary’s Clean Up TV campaign was born and she held their first public meeting that May at Birmingham Town Hall where she launched a manifesto against the BBC.

Within months of the meeting, a parody character mimicking Whitehouse had been created on BBC comedy drama Swizzlewick, called Mrs Smallgood.

Kenney said: ‘She was regarded by the BBC as a rather provincial housewife. ‘Who does she think she is?’ The people who run the BBC were what were called the Metropolitan elite.

‘These were people who went to Oxford and Cambridge my dear, they weren’t going to be told what was what by some Birmingham housewife’.

The tide began to turn for Mary when Conservative Lord Hill was appointed as BBC chairman – granting her her first television appearance two months after his arrival in 1967. 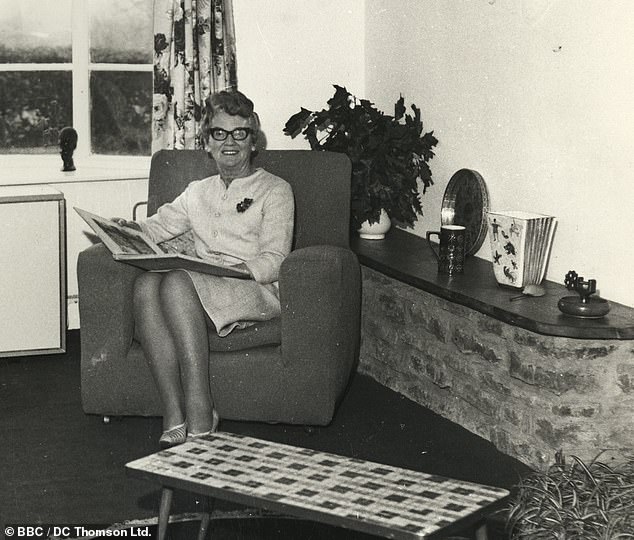 In 1960, Whitehouse was working as an art teacher at a secondary school in Telford and was married to Ernest Raymond Whitehouse, who she met at a Christian meeting 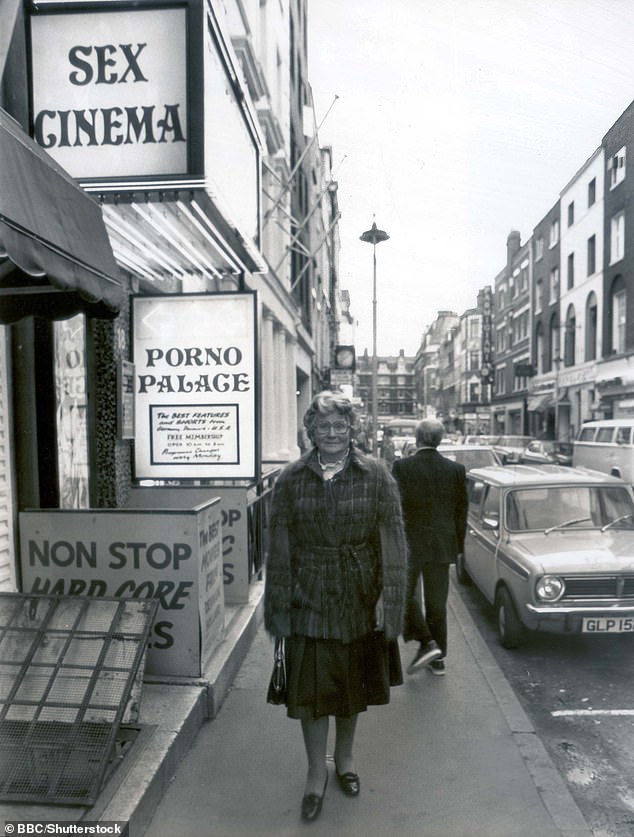 Whitehouse soon turned her attention to pornography, appalled at the rise in underground magazines targeted at young people. She is pictured in Soho in 1981

Shortly after her appearance Whitehouse began campaigning against the BBC for planning to play the song I Am The Walrus by the Beatles – horrified by the lyrics ‘you’ve been a naughty girl, you let your knickers down’.

Despite her protests, Greene decided to air the song and decided not to listen to Lord Hill’s request of editing out the offending lyrics – something described as a ‘final breach’ for the director general.

Green retired from the post of director general in 1969 and according to Curator Dr Sarah Demelo, who examined Mary’s records for the documentary, was so irate about his departure, he commissioned a painting of Whitehouse naked with five breasts as ‘revenge’.

Whitehouse often claimed to speaking on behalf of the British public, with author Ben Thompson, who wrote biography Ban This Filth! in 2013, said the campaigner painted herself as an ‘avenging angel of middle England’.

‘She would present herself as the voice of people who don’t have a voice and in doing that she identified, with quite a large measure of strategic brilliance, a constituency that would later be mobilised for Margaret Thatcher, Brexit, in America Trump. That way of saying ‘I speak for the people who are ignored for the elite’.

Whitehouse soon turned her attention to pornography, appalled at the rise in underground magazines targeted at young people – including one which featured a cartoon of Rupert Bear with an erection.

‘The idea of innocents being corrupted to be part of a sick counter cultural tableau was pretty much as bad as it got for Mary’, said Thompson.

By the 1970s ‘girly’ magazines were freely available to buy, with Mary actively campaigning to have them removed from shelves. 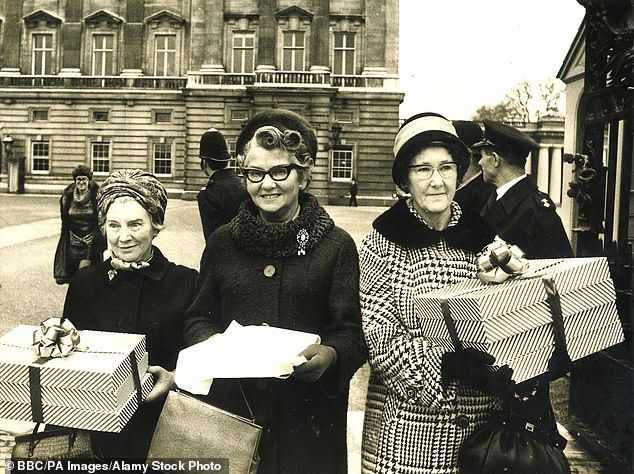 Mary Whitehouse arriving with Polly Bennett (L) and Nancy Crooke to deliver to Buckingham Palace letters signed by 20,000 people regretting the Queen’s decision not to broadcast a Christmas Day message in 1969

Along with Catholic Labour peer Lord Longford, Whitehouse launched an independent  inquiry into the dangers of pornography in 1972.

‘We went to one dingy club and I remember sitting there and the artists were naked and one of them was coming very close to Lord Longford with a whip in her hand’, said Gyles.

‘I think Lord Longford said he wanted to get up and go. He’d seen more than enough for science.’

The same week, Whitehouse had travelled to Rome, armed with examples of British pornography, to meet with the pope, with Gyles revealing: ‘I began to feel Mary and Lord Longford were going too far.

‘They were too dogmatic. They wanted to close the wall completely and so I fell out with them and left the commission.’

At a computer industry technology conference in Rome in November 1975, the anti-pornography campaigner warned the audience against technology becoming out of control

‘May I first share my fear that technology is overstepping itself,’ she said. ‘It does seem, to the lay mind, that the power of computer technology can reach a point where man is incapable of arresting the forces which he has released.’

Speaking of pornography on another occasion, she said: ‘When you start on this slippery slope, the lack of love and respect for one another, there the exploitation can then permeate and go into the realms of violence’. 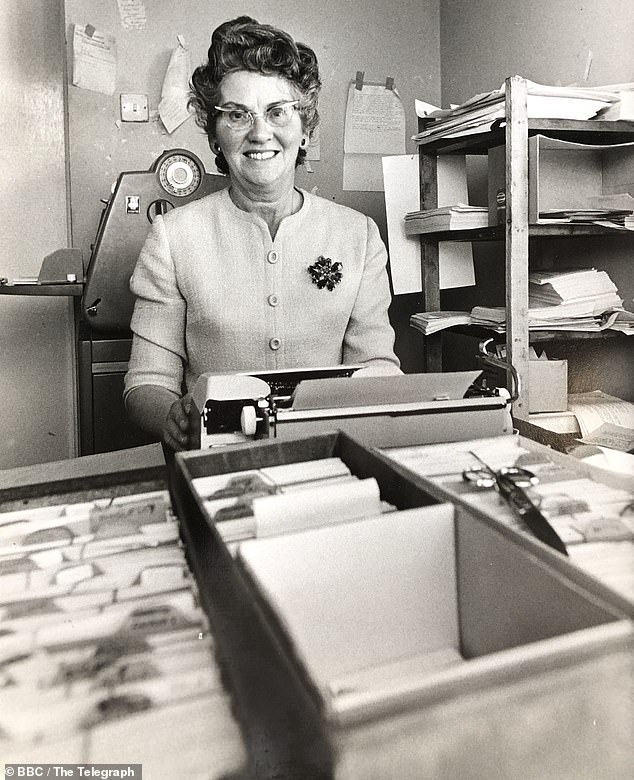 In January 1964, the Mary’s Clean Up TV campaign was born and she held their first public meeting that May at Birmingham Town Hall where she launched a manifesto against the BBC

The movie features a rape scene, with actress Maria Schneider revealing in 2007 that the scene wasn’t in the original script and directors had told her about it just before they began filming.

Film critic Peter Bradshaw said: ‘There is a moral case against The Last Tango in Paris now. In my naivety I thought look it’s a fiction, everybody is in on it.

‘I thought that blurring of consent existed fictionally, but I’m not sure it did now. It existed in fact and if the ghost of Mrs. Whitehouse was around now she would say “How naïve of you, this is exactly what i’ve been talking about all along, that these things have a moral dimension in the real world”.’

‘I think I left because it was unfashionable, I felt I was associating myself with the repressors and I wanted to be seen as a liberal person’.

Banned! The Mary Whitehouse Story is available on BBC iPlayer