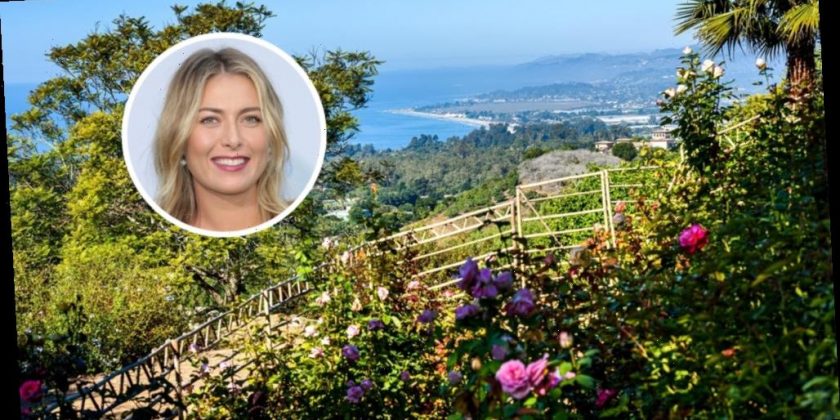 The Los Angeles-adjacent seaside community of Manhattan Beach is known for its chic boutiques, charming eateries, and for its expensive mansions, which are particularly popular with both powerful financiers and well-compensated athletes alike. Maria Sharapova has been a community resident for many years, and she custom-built her striking modern home, featured last year in Architectural Digest. But when things get too crowded in the tightly-packed beach neighborhood, the retired tennis pro can whizz up the coast to a scenic retreat in the Santa Barbara foothills.

Located in Summerland, a quaint beach town tucked between its arguably more famous Carpinteria and Montecito cousins, the scenic compound includes rolling gardens landscaped with lavender, roses, and jasmine. There are open lawns, towering fir trees, and a dense bamboo forest that’s more akin to a tropical jungle than what one might expect to find in Southern California.

Three separate structures comprise the compound, each one with a single bedroom and each “its own private oasis,” per the listing. The main house is a Balinese-inspired affair with exposed wood ceilings, loft-like living spaces, and a beautiful oceanview stone terrace set beneath palm trees. Just off the main house, practically hidden by a dense cover of lush foliage, is a wee detached studio with mustard-colored walls and space for a private office or artist’s retreat.

The second structure is a whimsical guesthouse with a Dutch-style two-piece front door, salmon-colored walls, and a back door that opens to a spacious stone patio and rolling lawns that spill down the mountain, out of sight toward the beach.

The third and final residential building functions as a caretaker’s guest cottage attached to the 5-stall horse barn and accessory equestrian facilities, which include a horse corral. That house is painted a deep forest green and fully renovated on the inside, with a large fireplace, redone kitchen, and its own set of picturesque ocean views.

Santa Barbara and the nearby communities have long been plagued by drought, so Sharapova will no doubt appreciate the private water well with 15,000 gallons of storage that transferred as part of the $8.6 million property.