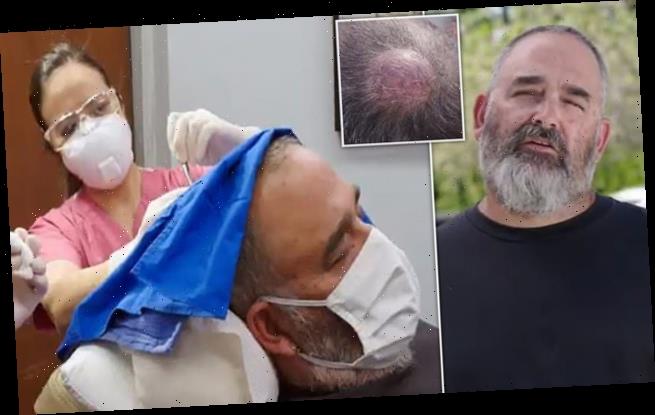 Mike, 53, from the US, who has been living with a soft, golf ball-sized bump on the back of his head for 15 years explains how he bumps it every time he gets in and out of a car.

‘The bump first appeared about 15 years ago, it’s kind of hard, tender at times,’ Mike reveals. ‘The biggest restriction that I have with this bump being on my head is getting in and out of cars.

‘I’ll hit my head on the doorsill and it definitely causes a quick little jolt.’ 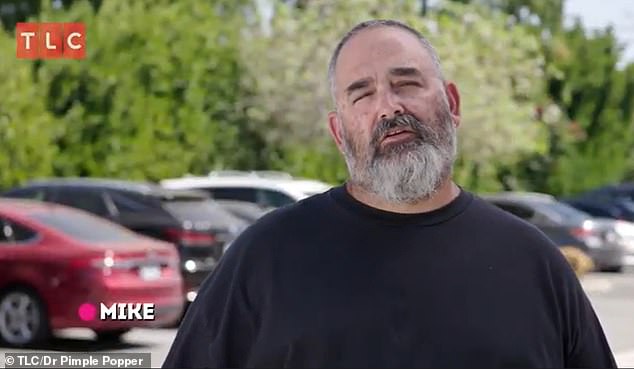 Mike, 53, from the US, who has a soft, golf ball-sized bump on the back of his head, explains how it first appeared 15 years ago in tonight’s episode of TLC’s Dr Pimple Popper

Mike, who says the lump (pictured) is kind of hard, tender at times, adds that he hates how it looks, and he bumps it every time he gets in and out of a car 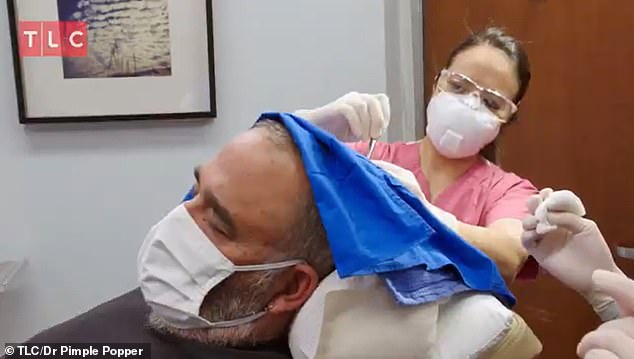 As he admits, Mike does not like doctors, and the last time he saw a doctor they got in an argument and he stormed out.

‘I haven’t been to the doctor’s in quite some time,’ he says. ‘The last time I was at the doctor’s, the doctor was telling me that I was obese. I pulled up my shirt and back then, unlike now, I had abs. We kind of had words with each other and I stormed out.’

While he has been living in a state of constant irritation for the last decade-and-a-half, Mike is full of praise for his partner Marilyn, who he credits as his ‘back bone’.

‘She takes care of me, basically in all ways, shapes and forms,’ he says.

In fact, it wasn’t until Marilyn showed Mike how big his bump was that he finally decided to get some help.

‘Marilyn had showed me a picture of it, and I didn’t really know how big it was,’ he explains. ‘When I saw it, it kind of scared me a little bit.’ 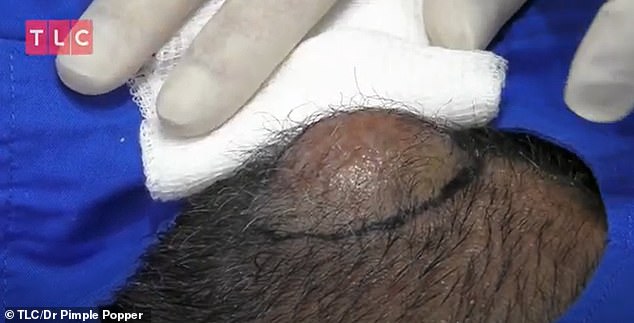 Propped up in the operating chair, Mike has his pesky head lump numbed with local anaesthetic, allowing Dr Lee to get to work. Pictured, the huge bump on Mike’s head 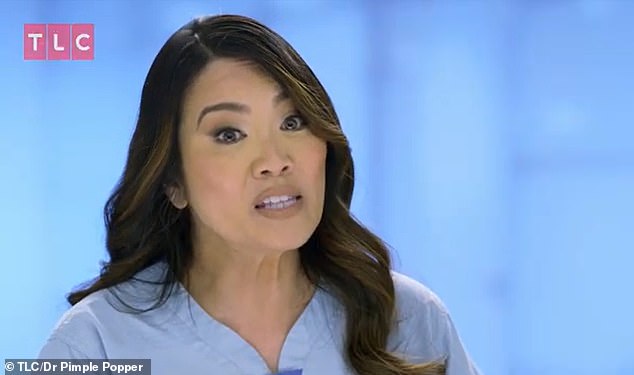 After last week’s episode, where Dr Lee (pictured) got covered in cyst juice, she takes a much more cautious approach as she slices into Mike’s cyst with her scalpel

‘You’ve got an eye on the back of your head, huh?’ Dr Lee asks, looking at Mike’s head bump, to which he replies: ‘A big golf ball back there.’

Getting the impression that Mike isn’t very trusting of doctors, the expert does her best to put him at ease so she can inspect his head lump and determine if she can safely remove it.

WHAT IS A PILAR CYST?

Pilar cysts are common growths that form around a hair follicle, and are typically found on the scalp.

They form because the cells in the top layer of skin produce keratin, the protein that gives skin its strength and flexibility.

Normally, these cells move up to the surface of the skin as they start to die, so they can be shed.

But sometimes, these cells can move deeper into the skin and multiply, forming a sac – a ‘bag’ filled with fluid.

They secrete keratin into the middle of the sac, which forms a thick, yellow paste. This can ooze out of the cyst if it is burst.

Unlike other types of cysts, pilar growths strongly run in families, and are largely harmless.

They typically affect middle-aged adults, and women more than men.

‘I can tell right off the bat that Mike is not playing around, that he is a tough, macho dude,’ she says. ‘He is that kind of guy who doesn’t really like doctors, he doesn’t want to mess around.

‘But I know that he is a soft little mushy teddy bear inside.’

‘It’s kind of red, like you’ve smushed it down a few times,’ she says, prodding and poking at Mike’s bump. ‘I do think that this is a pilar cyst, it definitely does wobble, I can see why this cramps your style!’

Excited to remove Mike’s lump and give him some welcome relief, the expert leads her patient into the clinic to begin the procedure.

‘If the bump gets removed today I won’t have to worry about it growing anymore,’ Mike says. ‘Dr Lee, she is a very nice lady.’

Propped up in the operating chair, Mike has his pesky head lump numbed with local anaesthetic, allowing Dr Lee to get to work.

‘I’m hoping that Mike’s pilar cyst is going to pop out nice and whole, and there’s not going to be any obstacles,’ Dr Lee says.

‘Will it be grumpy like he shows himself on the outside, or is it going to be soft and cuddly like I know he is on the inside?’

After last week’s episode, where Dr Lee got covered in cyst juice, she is taking a much more cautious approach as she slices into Mike’s cyst with her scalpel.

‘Sometimes they squirt at me!’ she says. ‘I’ll try and hold it in,’ Mike jokes.

As she adjusts the skin flap of Mike’s wound, Dr Lee keeps talking to her patient to keep him calm.

Right on cue, Mike’s smiling cyst starts spitting out bits of pus at Dr Lee, as she ruptures the cyst wall. Squeezing it, the expert releases a flood of gooey, apple sauce-resembling contents. 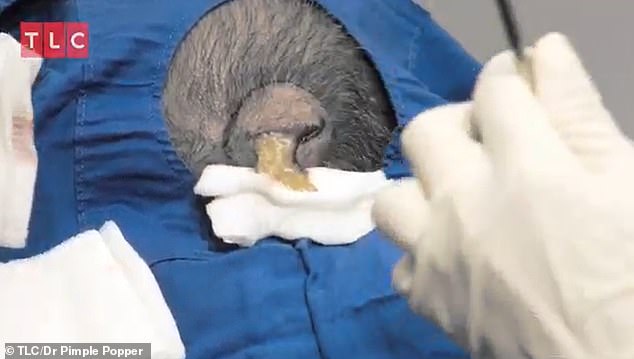 ‘It’s not brains coming out, thanks goodness,’ Dr Lee jokes, as she scrapes out the remaining contents.

Next up, Dr Lee snips the cyst sack free, removing a dumpling-shaped ball of tissue from Mike’s head.

‘It’s talking to us, do you hear it?’ Dr Lee asks, as she wiggles around inside Mike’s head wound.

As Dr Lee stitches his head up, Mike insists that he won’t need to come back for a follow up appointment, claiming that he is capable of removing the stitches himself.

‘I’ll take the stitches out myself. I took my braces off, I’m sure I can take out my own stitches,’ he says casually.

Shocked, Dr Lee asks how Mike managed to remove his own braces, to which he bluntly replies: ‘With pliers.’

‘I don’t even want to imagine what that felt like,’ a stunned Dr Lee says. ‘I do not recommend that a patient take out their own stitches, it’s always best to see a professional.’

Happily, Mike leaves Dr Lee’s clinic cyst free, and ready to get on with his life. ‘My procedure went well, she did a good job, took out the golf ball,’ he says, ‘I don’t have this nasty looking thing on the back of my head anymore!’

Meanwhile, Shaksiaha is an eclectic woman who has been stretching her ears since her teenage years. She has always identified with an alternative lifestyle, and the bigger the gauge, the better.

All was well until her left earlobe developed an ulcer and split in two. Now, Shakisaha is left with a split earlobe that, in her own words, looks like a ‘cow’s teat!’

Dr Pimple Popper airs at 10pm on Thursdays exclusively on TLC, and stream on discovery+