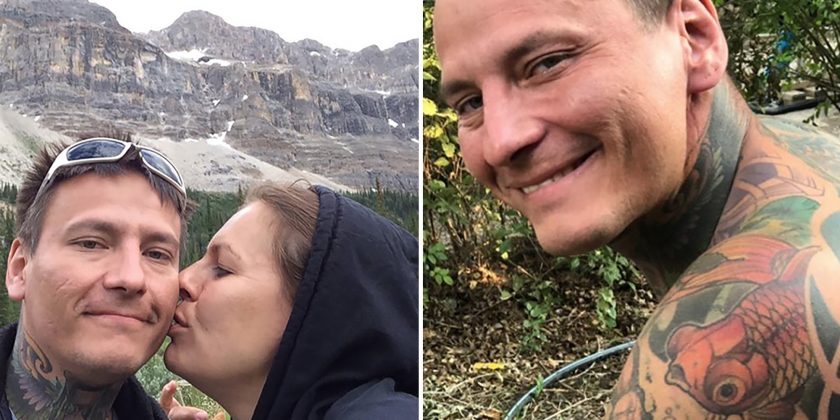 A grieving widow had her dead husband skinned after he told her he wanted a displayed artwork out of his tattoos after he died.

Tattoo artist Chris Wenzel, 41, suffered from ulcerative colitis and one of his dying wishes was for his wife Cheryl to remove and preserve his ink-adorned skin before he was buried.

Wenzel wished for his children and grandchildren to admire his ink as a displayed artwork for years after he had passed.

Cheryl, from Saskatoon, Canada, told The Globe and Mail: “I thought, that’s different, but yeah, that’s cool. I don’t care what it takes, I’m going to get this done for him.”

“You can hang a picture on a wall. A tattoo is something that has been done for hundreds of years. It’s just preserving it.”

Cheryl hired Save My Ink Forever, an Ohio-based company that specializes in preserving tattoos of the dead.

According to CTV Saskatoon, Wenzel had been diagnosed with ulcerative colitis — a long-term condition where the colon and rectum become inflamed.

He died in his sleep in October after complaining of chest pains and his grieving wife Cheryl soon discovered the family business in the US could fulfill his dying wish.

Kyle Sherwood, master embalmer and funeral director of the company, told CTV Saskatoon: “Tattoos, you know, tell a story about a person.”

“And for someone to get something tattooed on them that they’re displaying for life, you know, means something to them. You wouldn’t burn or bury a Picasso and that’s what some of these pieces are.”

The complex three-month process to remove and sustain Wenzel’s tattoos involves a special formula to surgically remove the skin and it costs a staggering $70,700.

The eye-watering amount was raised partly through a GoFundMe organized by family friends.

Wenzel owned and tattooed at Electric Underground Tattoo and completed his first artwork on his aunt when he just nine-years-old.

His skin will now be preserved in a frame and are expected to be shown at a spring tattoo expo in Saskatoon.

According to Sherwood, who runs Save My Ink with his dad, this is the largest tattoo preservation ever to be done in North America.

Wenzel was well respected for his art throughout the city, with tattoo artist Marc Wishart telling CTV Saskatoon: “If you know anybody in the city with a tattoo, it’s probably one of his.”

His wife Cheryl, who has also been tattooed by Wenzel, said she would also like to have her art preserved and would hang it right alongside her husbands.