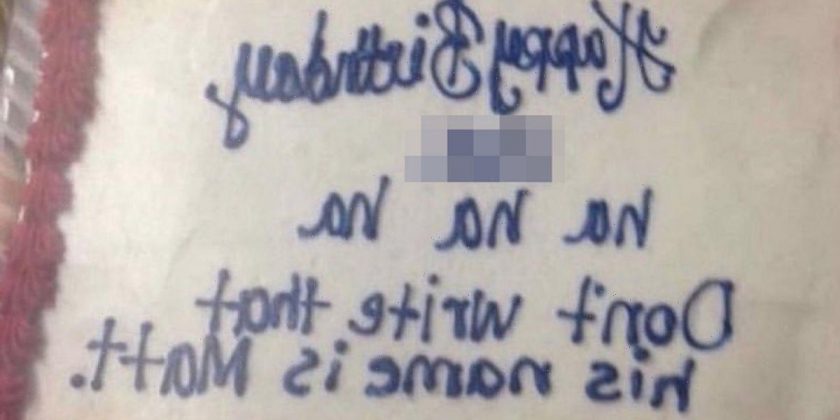 Getting a cake made for someone's birthday is often considered as a kind gesture.

However, it seems that the baker took one cheeky friend's request a little too literally.

Wanting to get a rectangular butter icing topped sponge personalised for a 'Matt', the mate thought he would extend the banter along to whoever was in charge of the piping bag.

READ MORE: People are only just realising where parmesan cheese comes from – and they're horrified

And, it turns out that was not the best idea.

Whoops – it looks like the cake decorator thought his name was Dick after all.

A picture of the naughty cake was posted onto Twitter meme account 'No Context Brits', which has 1.6million followers.

Many poked fun at the accidentally insulting birthday treat.

One person giggled: "That's taking the word literally to a new level."

Another user related: "Literally sent this to my brother Matthew on his birthday."

While a third chuckled: "As long as the cakes nice who cares if there's a Dick on it."

Someone else fretted: "Nooooooooo!"

This is not the first time that a member of staff took a celebration decoration request word for word.

Previously, Mum Denise Smith decided to order a decorative banner for her son's christening – however the printing staff took her request a little too literally and it left her cracking up

The 30-year-old informed the printing shop staff of her simple request for the decoration that was for the special occasion.

She told staff: "I just want 'on your Christening day' printed on a banner, please."

However, the sweet gesture for her son Raymond Oliver Maguire's event got a little lost in translation.