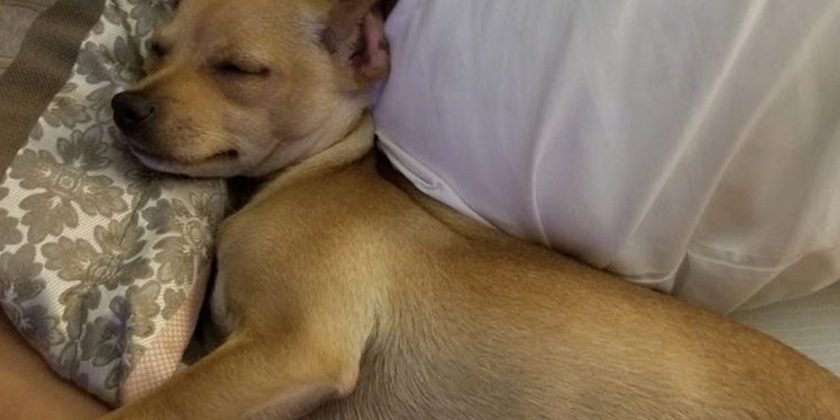 A Kansas woman and her children were left mortified after a man stabbed their beloved Chihuahua after running it over.

On Thursday, Kristyn Barlow and her four children and their two dogs were on their way to a playdate when her Chihuahua named Poochies darted into the street.

Barlow told Fox 4 that she saw a man in a pickup truck hit the back legs of the Chihuahua. The man then pulled over, leaving Barlow to believe he was going to help the wounded dog.

Instead, Barlow claims the man pulled out a knife and brutally stabbed Poochies in her neck.

“After he did what he did to Poochies, I had to rush [my kids] inside because I can’t believe he did that,” Barlow told Fox 4.

Making the incident even more traumatic, Barlow says that the man then brought Poochies to her doorstep wrapped in a tarp.

“He brought her down and dropped her down in front of the kids like it was nothing like he didn’t care. He just wrapped her in a tarp on the side of my house, like an old paint tarp that was moldy,” Barlow told the news station.

“He was like, ‘She’s gone. There was nothing I could have done. I had to put her out of her misery,’” Barlow claims the man told her.

• Want to keep up with the latest crime coverage? Click here to get breaking crime news, ongoing trial coverage and details of intriguing unsolved cases in the True Crime Newsletter.

Barlow also opened up about Poochies death to KSHB 41 saying the Chihuahua would have just turned one.

“She was the best dog I’ve ever had,” Barlow told the outlet.

Barlow explained to KSHB 41 that Poochies was a rescue dog. “I saved her from being hit by a car. She was really really tiny,” Barlow said.

“I want him to realize what he did was wrong it wasn’t his life to take. He wasn’t a vet. I wanted to be able to take my dog to a vet, to a hospital,” Barlow told KSHB 41.

The Olathe Police have since identified the man in question, but his identity has not been revealed to the public.

RELATED: Woman Arrested After Allegedly Tossing Dog in Trash Because She Couldn’t Afford to Keep It

“We have identified the individual involved in the animal cruelty investigation. The case remains under investigation,” the Olathe Police wrote in a statement.

A GoFundMe, created by Jungle Law, a group of attorneys who specialize in animal cruelty law, have set up an account in Poochies’ honor.

“All money collected from this GoFundMe page will support the Great Plains SPCA. We are also working together with the animal community and state representatives to pass Animal Abuse Law,” the page reads.