Man, 41, who quit his high flying HR job to live in his grandmother’s 500-year-old cottage on a remote Northern Irish island tells Ben Fogle how he forages for food and went for 5 years without electricity

A man living alone on an remote island has revealed how he lived without electricity for five years and relies on neighbours and foraging for food.

Rory Morgan, 41, used to be a successful human resources executive in Dublin before he decided to quit his job when he was 32, and move to Rathlin Island, a 9km-long 2km-wide island located between Northern Island and Scotland.

Rory, who admitted he doesn’t like water, fishing or the cold, welcomed Ben Fogle on to the island where he’s refurbished his grandmother’s 500-year-old cottage, for tonight’s New Lives in the Wild, airing at 9pm on Channel 5.

‘Quirky’ Rory, who survives on little money, works shifts at the local pub and is a volunteer firefighter, tells Ben his house is haunted by ghosts and that he relies on ‘foraging’ through baskets left by friendly neighbours and the only local shop to feed himself.

But in spite of his cheerful and eccentric facade, ‘intrigued’ Ben soon discovers his host is a ‘selfless’ individual who puts his friends before himself, and has travelled six times to Lesbos to help refugees, witnessing ‘horrific’ situations. 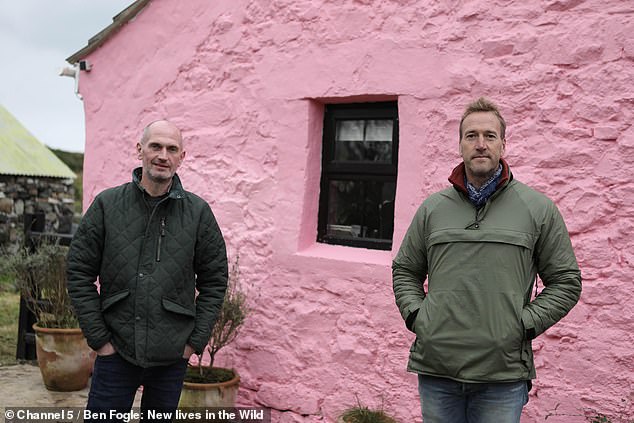 On tonight’s New Lives in the Wild, Ben Fogle visits Rory Morgan, 41, left, who’s left everything behind to go live on Rathlin Island, an island located between Scotland and Northern Ireland

Rory makes the revelation while he and Ben are exploring the island and later opens up about it further when the two men sit on the beach at dusk.

When Ben asks him what he feels when he is looking over at the sea, Rory says:

‘Today’s a nice day but something you look back and think of how dangerous the sea can be.

He goes on to reveal there is the same distance between the island of Ballycastle and Rathlin as there is between the Turkish coast and Lesbos, with refugees making the crossing in the hope of a better life. 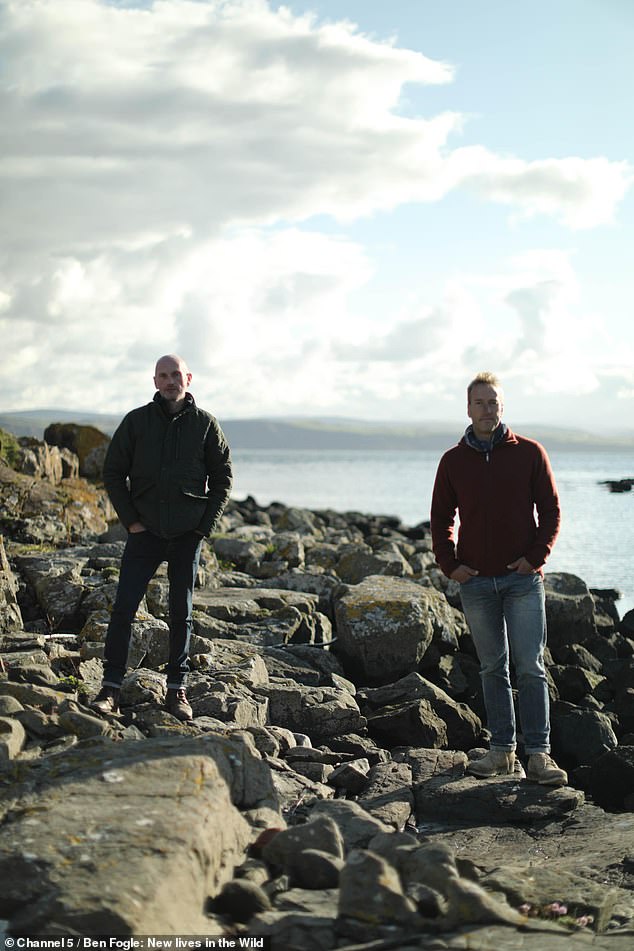 ‘Eccentric’ Rory amuses Ben with his quirky ways, but also reveals a more serious side to himself, explaining he’s bee to Lesbos six times to help refugees trying to cross from Turkey into Greece in hopes to find a better life 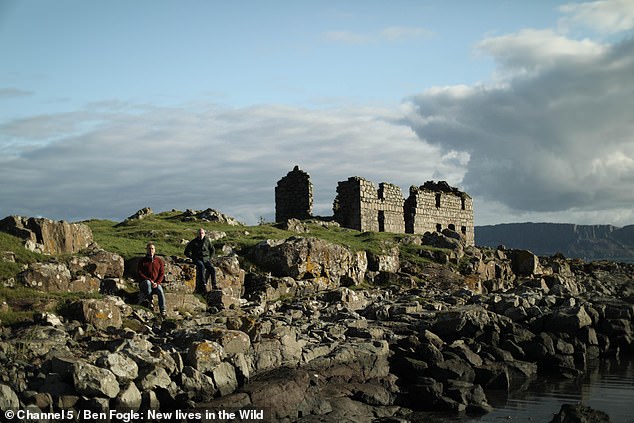 Rathlin Island, which is 9km-long and 2km-wide, is like no other island Ben’s ever seen, he tells the camera

‘At times it was pretty horrific but I don’t like over-talking it, because I was one of thousands of people who went out and helped in a completely horrendous situation,’ he says of his time helping in Lesbos.

‘I went the first time not having a clue what I was going out to see,’ he says, adding he’s been six times in total.

‘People were sea sick, they were scared, they urinated on themselves… You have the most vulnerable people sitting and swirling around in that kind of mess for maybe 2-3 hours, it was pretty horrific,’ he adds.

‘I was pretty lucky in some regards: I only witnessed one fatality on the beach. It was an 80-year-old grandmother who was surrounded by her family,’ he tells Ben, explaining seeing the elderly was the ‘kind of thing that got to him.’

‘The world is a horrible place and horrible things happen, I was one of thousands of people who were there,’ he adds, saying he feels lucky that it’s not had a lasting negative impact.

‘I know people who have been out there and have a lot of mental health issues after seeing the horrific thing they’ve seen,’ he adds.

‘I do plan to go back out again, not sure just when yet,’ he tells his guest.

At the beginning of the episode, Rory amuses Ben with his ‘eccentric’ ways.

Ben is left surprised and intrigued by his host, who lives in his grandmother’s cottage, which he has spent eight years refurbishing.

‘When I first moved it, I literally had a flushing toilet and an outside tap,’ Rory tells him. 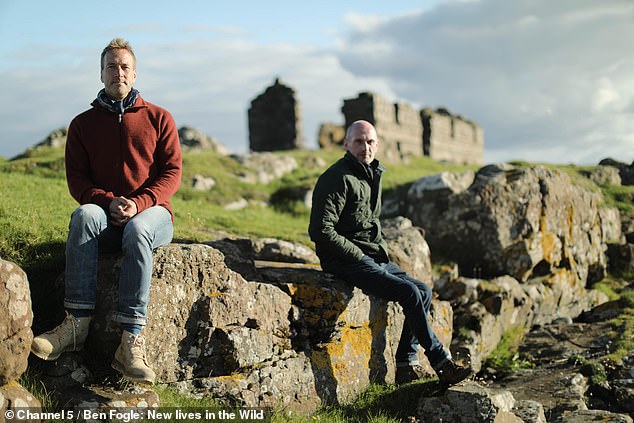 Rory, right, used to work in HR but left his job after ‘losing it’ eight years go, finding the company he worked for at the time had shown ‘no humanity’ for the people they had employed

While he’s refurbished the cottage to a more comfortable standard, Rory reveals he only ‘treated’ himself to a generator three years ago, meaning he lived without electricity for five years.

He also tells Ben that he can hear ‘people’ having a party in the living-room, suggesting the cottage might be haunted.

At first, Ben does not know what to make of his host.

‘I’m intrigued, I don’t think I’ve ever been quite as surprised to meet someone that was as unexpected as he is,’ he tells the camera.

‘I can’t tell if he’s an extrovert or a very shy person,’ he adds, adding Rory is ‘keeping [him] on [his] toes.

‘I don’t even know if he believes in ghosts. I’m completely confused,’ Ben adds.

Rory lives on little money, though he tells Ben he is ‘by no means uncomfortable.’

The island dweller earns money by working at the local pubs and being a volunteer firefighter – paid for the training time. 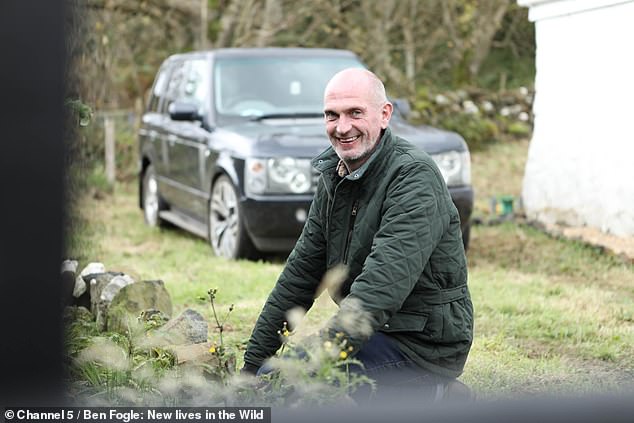 The island dweller spent the last eight years renovating his grandmother’s cottage, which is 500 years ago. During the episode, he paints it bubblegum pink

When food cannot be delivered to the island, Rory ‘forages’ around the island, relying on baskets of produce left by generous neighbours to feed himself and his dog.

Even though he doesn’t like fish, which Ben remarks is unusual for an islander, Rory relies on seafood deliveries from cargo ships such as lobsters and crabs, which he ‘pays in pints’ and seaweed he forages from the beach.

He also has a key to the island’s only shop and can help himself to some products after hours.

‘He’s quite eccentric, but it ties in with the whole island itself,’ Ben remarks in an aside to the camera.

‘It’s quite an unusual place, it has a unusual feel, it’s kind like no other island I’ve been to, it’s all a bit quirky and eccentric and I love that,’ he adds. 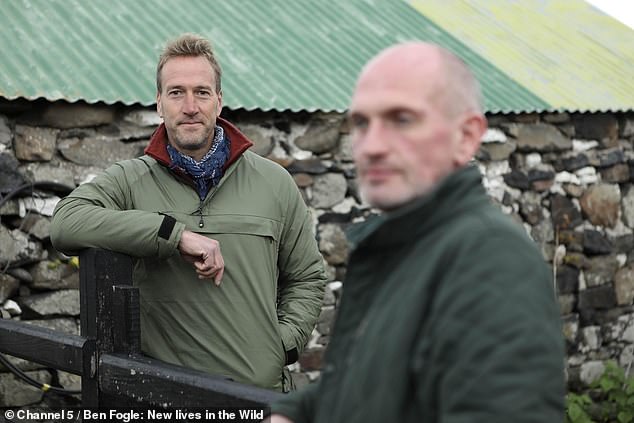 Ben says Rory ‘keeps him on his toes’ after their first meeting, as he struggles to paint a portrait of his host

Rory explains that he was driven to the island after quitting his job as an human resources executive.

After graduating from university in Belfast, Rory launched a successful career which saw him work for several multinational companies, all over the world.

While he tells Ben his mother used to tell him he had a ‘horrible job,’ Rory used to feel comforted by the knowledge he never treated people ‘unfairly’ because he knew they had to go home and break the news that they had lost their job to their family.

However, an incident during his last job in Dublin pushed him to leave everything behind.

After months trying to recruit talent from all over the world and convincing people to move to Ireland, the company he was working for at the time decided to close their Dublin office the following month. 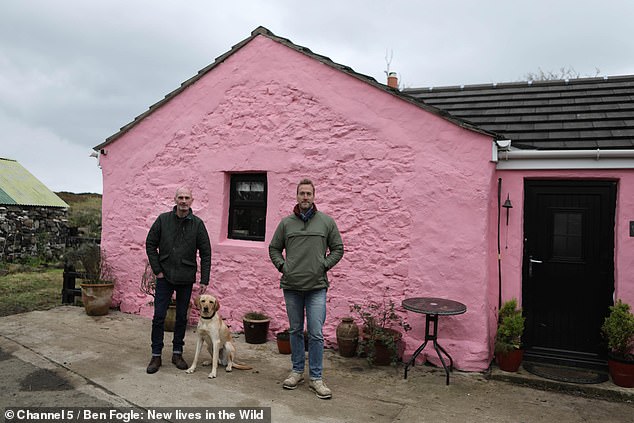 Rory and his dog with Ben in front of the cottage after they painted it pink. Rory said the island will always be home to him, but it doesn’t mean he won’t temporarily leave it

‘I just thought “how am I going to tell these people?”,’ Rory tells Ben.

‘And I just lost it. There’s no compassion here for people or the upheaval we have put them through to move themselves, their family and all of a sudden, it’s “by the way, we’ve changed our mid, so bye bye now”,’ he goes on.

He admits to feeling guilty about how he handled the situation and having to tell the people that there were no longer jobs waiting for them in Dublin.

In an aside to the camera, Ben suggests that Rory’s volunteering and humanitarian work might be driven by the guilt he still carries from his years working in HR.

During the episode, Ben helps Rory around the house, and even helps him paint the white cottage bubblegum pink.

Rory, who admits he can be ‘difficult to live with,’ tells Ben he has little patience and that he is single because dating is not a priority for him at this time.

His friends on the island, including him best friend Teresa, admit Rory is an unusual man, but praise his selfless ways, talking of nice things he’s done to help them in times of need.

Teresa tells Ben: ‘He’s told me some of his experiences in Greece and it has touched him quite a lot.

‘It’s a side he doesn’t show anybody but his good friends do know. He’s very, very caring,’ she adds.

Ben also reveals in the voiceover that Rory is well-liked by many of the islanders, and that eight more people have travelled to Lesbos to help with refugees after he took his first trip.

The island has also been moved to raise thousands in aid of the refugee crisis thanks to him.

‘He’s not typically islander, but I don’t really know if there is such a thing,’ Ben tells the camera.

‘He’s really loved and he brings energy and compassion and kindness here,’ he adds.

Ben’s trip ends with a night spent on the harbour with Rory’s friends, with music and singing.

Ben Fogle: new Lives in the Wild airs tonight on Channel 5 at 9pm. 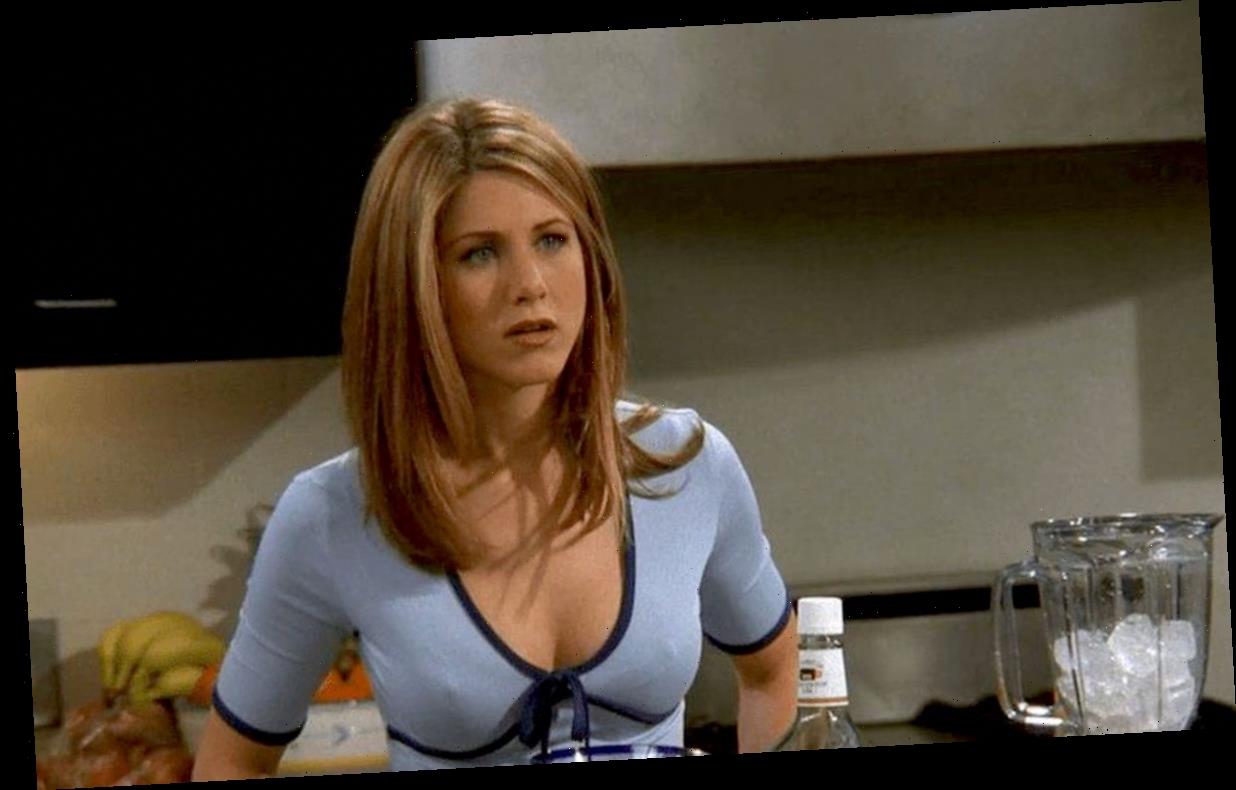 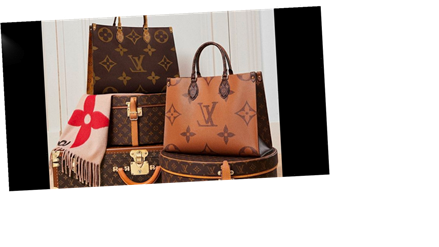 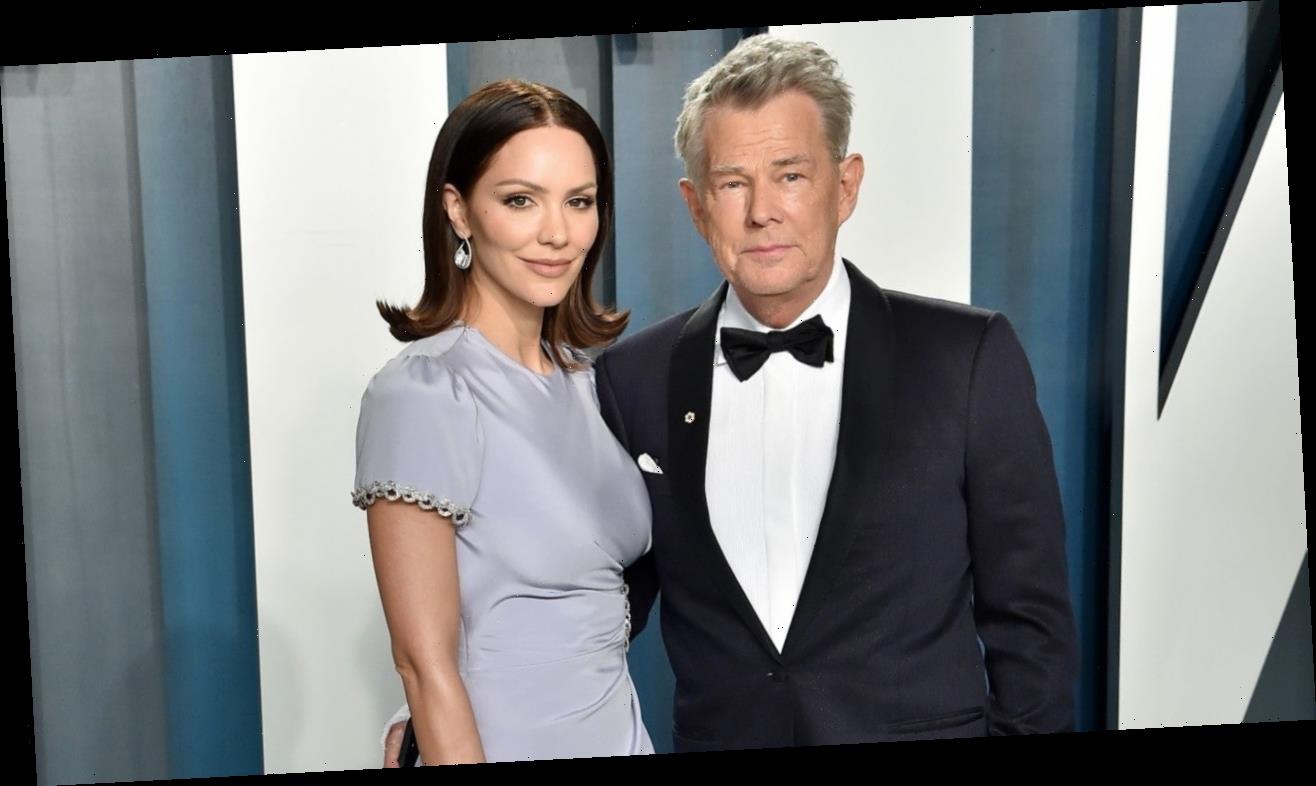