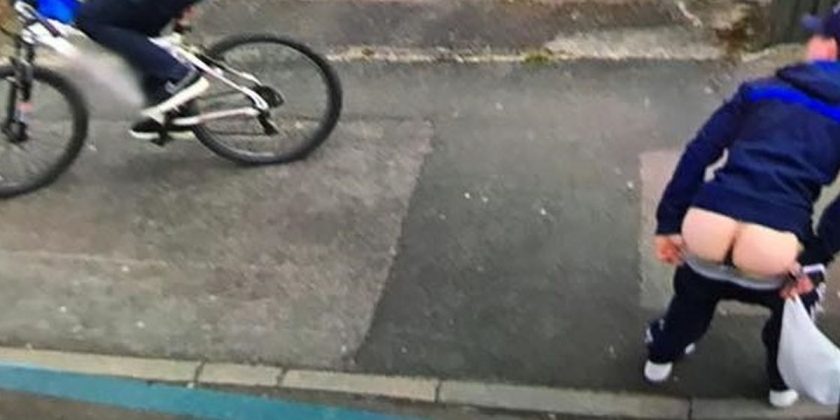 A ‘delighted’ man who mooned at Google’s Street View car has seen his bum immortalised online.

Toby Sullivan managed to foil Google’s self-branded ‘cutting edge technology’ and get his behind online for the world to see unblurred.

The tech giant claims it can detect automatically when something in an image needs blurring as a way of protecting people’s privacy- but Toby’s bum made the cut.

Google have since blurred the bum – but using the map zoom in tool still reveals his bare bottom which he flashed to the car in April last year.

Delighted Toby, who flashed his rear in Hayes, Greater London, shared his brazen antics online and wrote: “Fully made it on google maps. I saw the car thought f*** it why not. I can f*****g believe it ."

The original Street View image shows Toby carrying a plastic bag and squatting while dragging his navy tracksuit bottoms down and baring his rear.

The image has since been edited to pixelate his bare flesh but is still winning praise from people on social media finding it hilarious and branding him a ‘hero’.

Since learning his bum was blurred Toby posted: “These a***holes have only gone and blurred it!”

Google state that they use ‘cutting edge technology’ to protect people’s privacy on their mapping service.

Their website ‘blurring policies’ section states: "We have developed cutting-edge face and license plate blurring technology that is designed to blur all identifiable faces and license plates within Google-contributed imagery in Street View.

"If you see that your face or license plate requires additional blurring, or if you would like us to blur your entire house or car, submit a request using the Report a Problem tool. Please note, however, that once Google blurs an image the effect is permanent."