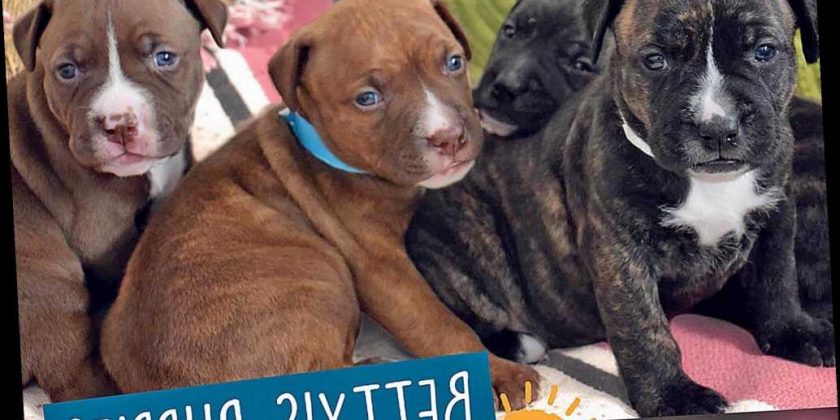 Earlier this year, employees from Foothills Animal Shelter found a sweet pit bull named Betty wandering around in the freezing cold in Lakewood, Colorado. Betty was cold, hungry, and appeared to look worried. The shelter employees immediately noticed that the pit bull looked like she may have recently given birth, but they didn't find her with any puppies.

"During my exam, the first thing I noticed is that she was lactating," Claire Vaiden, Foothills Animal Shelter's veterinarian, said in a video. "She had a lot of development on her mammary tissues, which told me that she had some very young puppies she was feeding."

Snow was in the forecast, so shelter employees worried that if they didn't find Betty's puppies soon, they wouldn't last long without their mama. In a leap of faith, they brought Betty back to the area they first discovered her, hoping that she would lead them to her babies.

"We took Betty back to where we found her in hopes that her maternal instinct would lead us to her puppies, and that's exactly what happened," Jenny Homan, Foothills Animal Shelter's marketing and community engagement manager, tells Daily Paws.

Betty led the shelter employees to four 3-week-old puppies, and the entire family was taken back to Foothills for some much-needed TLC. The playful female pups made it easy for staff to land on names for them. Taking inspiration from Golden Girls, the shelter named the pups Rose, Blanche, Sophia, and Dorothy.

"We were playing off the fact that we had four girls to name, which felt like a good enough reason to name them after the Golden Girls," Homan says.

Keeping with the Golden Girls theme, employees decided to name the mama pit bull Betty after their favorite actress on the show, Betty White. Betty and her Golden Girls are all healthy thanks to the diligent Foothills Animal Shelter staff, who went the extra mile to make sure this mama and her family were safe and sound. All four babies — and Betty! — were adopted after spending some time in a foster home.

Homan says the best part of this canine version of Golden Girls is the happy ending (not unlike each episode of the show, we might add). "Being able to first reunite the babies with their mama, who they needed to survive, and then being able to find this family loving homes is truly inspiring," she says.

We're so happy that Betty and her gals found safe and loving homes. Let's hope their owners are big Golden Girls fans!

This story originally appeared on dailypaws.com