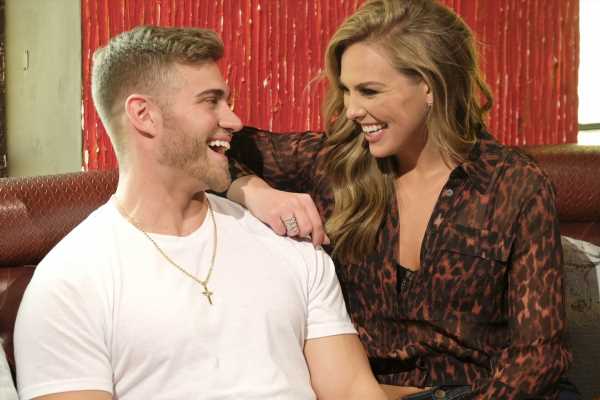 Just two episodes in, and an L-bomb has already been dropped. On Monday night’s episode, Luke P. told Hannah he’s falling in love with her on The Bachelorette, and it’s definitely rubbing the other guys the wrong way. Because not only is it super early in the season for something so serious to be coming out of everybody’s mouth — the limo arrivals just happened, after all — but it’s already given the other men who were there to see it all go down a reason to doubt his intentions.

Luke confessed his feelings to Hannah on a group date, when he and the other men were competing in a pageant. When it was his turn at the mic, he told Hannah that he’s starting to fall in love with her and walked over to the judge’s panel to kiss her. It was a moment that certainly seemed to shock Hannah, because obviously, they just met, but it was clear pretty quickly that Luke wasn’t joking around.

And although Hannah seemed to take how fast his feelings were developing as a compliment, she also seemed a little skeptical about whether or not that was how he truly feels about her already.

Needless to say, Luke ended up winning the pageant, scoring a crown and sash of his own — and he wasn’t even done yet. When everyone sat down to have cocktails after the pageant, he was the first to steal Hannah away for a conversation, too.

When it was just the two of them, Hannah took the opportunity to ask him how he can say he’s falling in love with her when they just met, and he had an answer totally prepared. Luke said:

Hannah said she was glad that Luke told her, because she’s looking for honesty and someone who will have strong feelings for her. And later in her ITM interview, she opened up about the fact that she was glad he was being so honest with her, since honesty is what she’s looking for — and that at this point, he’s saying "everything my heart needs to hear."

It definitely made the other guys doubtful of Luke, though, and they confronted him about it when he came back from his chat with Hannah. "I like Hannah just as much as you do, and I don’t want her emotions to be rattled just because of something that may or may not be factual," Mike said.

But Luke wasn’t phased, and he seemed even more determined to spend time with Hannah and prove his feelings.

It’ll be interesting to see if this means Luke’s the villain this season, or if confessing his feelings to Hannah so early on actually ends up paying off. Maybe it’ll end up being a little of both.