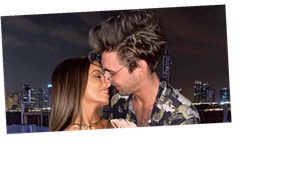 Love Island has spawned famous couples such as Olivia and Alex Bowen and Camilla Thurlow and Jamie Jewitt.

But other couples, like Maura Higgins and Chris Hughes started off as friends on the show before their feelings developed back at home.

Meet the Islanders who coupled up after the cameras stopped rolling.

However, their relationship was short-lived and ended after a matter of months in the outside world.

Wes then coupled up with Arabella Chi from the following year’s series of the show.

The pair lasted for nine months and even lived together before calling time on their relationship.

Seven months after she slid into his DM's the couple appear stronger than ever.

Lucie recently said: "He's the best friend as well as a boyfriend. Luke is so calm and caring. He's very positive and I just love spending every minute with him. He's definitely The One. When you know, you know."

Lucie was previously couple up with Joe Garratt on the show.

Kem won the show with then-girlfriend Amber Davies, however, things fizzled out after just four months following the final show.

He quickly moved on with Kendall Rae Knight after the pair were spotted kissing on a night out in London.

Meanwhile, Amber is now loved up with Nick Kyriacou.

However, after seven months and plenty of cheating rumours the couple had gone their separate ways.

When they finally confessed to their romance, Chris said: "Turns out I fell in love with my best mate."

After leaving the show single following a brief fling with Wes Nelson, Laura moved on from the show with another Islander – Max Morley, the winner of season one of Love Island.

The couple were on and off before parting ways entirely despite having plans to live together at one point.

An insider said: "They've unfollowed each other on Instagram and it's properly over this time."

Kaz seemed to have found love on the show with Josh Denzel.

However, they didn’t last outside the villa and Kaz swapped Josh up for another Islander – Theo Campbell.