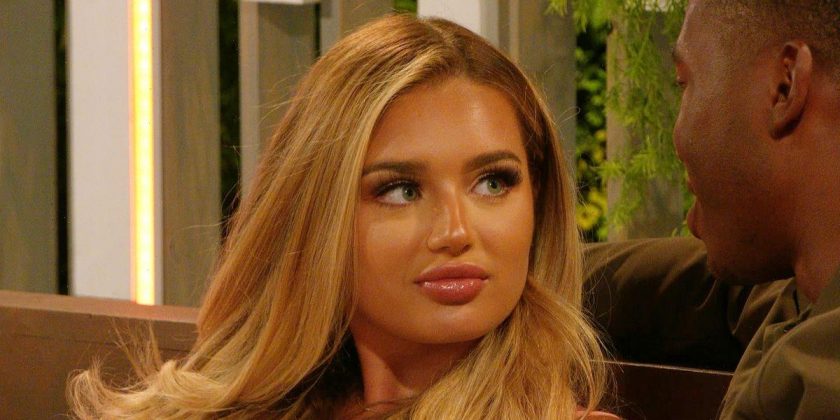 Love Love Island? Our Factor 50 email brings all the goss direct to your inbox

The 21-year-old fashion boutique owner left the villa with Aaron, also 24, in a double elimination – but not before other Islanders had picked up on her unique speech style.

In a clip aired on Love Island: Unseen Bits, marketing executive Georgia Townend, 28, gave the blonde ‘elocution’ lessons while sat around the firepit with Lucinda and fellow contestant, Faye Winter.

Georgia said: “'Lucinda, we’re going to do some elocution lessons with dragging out your vowels.”

Lucinda said: “What does that meaaaan?”

Lucinda asked if her speech was “really that bad” and Faye chimed in and said “Yes.”

True to her word, before she was dumped from the villa, Georgia was then seen helping her shorten her diction, with the help of Lucinda’s villa BFF Millie Court.

Georgia explained to Lucinda that she over-pronounces words and extends her vowels, particularly when shocked.

Georgia said: “It’s when it’s something that’s shocking to you, you’re like “reaaaaaally." Imagine the size of the dictionary if it was based on the way you said words.”

Lucinda good-spiritedly went along with the elocution lesson, bringing the same attitude to her Instagram story yesterday, where she shared the song that sampled her elongated ‘really’ and features her on the artwork with her 519K followers.

She captioned a screenshot of the song’s Spotify page: “Just when you think you’ve seen it all.”

The song starts with a clip of Aaron Francis, who was in a love triangle with Lucinda and Brad McClelland while still on the show: “Honestly if I was rude I would kiss you right now in front of him.”

Lucinda responds to Aaron with her trademark phrase “reaaaaaally”, which is then repeated throughout the song as the response to Ren DMC’s vocals.

She is also sampled later in the track saying “ohhh myyy godddd.”

The hilarious track sampling Lucinda was put together by Ren DMC, a London-based based rapper who has been making music since 2006 and whose debut single ‘Ya Dun Know’ was released in August 2018.

The rapper said: “I began watching Love Island from 2018 as a request from my Instagram followers and I would tend to voiceover certain scenes and recreate the narrative in a comical way.

“Since then I’ve been up to date with the new season and Lucinda was extremely popular for her phrase “REALLY”, so as I also do audio engineering I made her catchphrase into a song.

“I put a snippet of the song on TikTokand from there it went around the other social media platforms reaching Lucinda’s radar – I do not know her personally but she re-shared the song to her audience which was great!”

Ren DMC is inspired by artists such as Jay-Z, 50 Cent and Snoop Dogg, and his other songs ‘Spider Man-Dem’ and ‘Valentine Is Coming’ boast 90,599 and 81,892 streams on Spotify respectively.

Really ft. Lucinda is available on both Spotify and Apple Music.

For all your updates on Love Island, sign up to our Factor 50 newsletter.