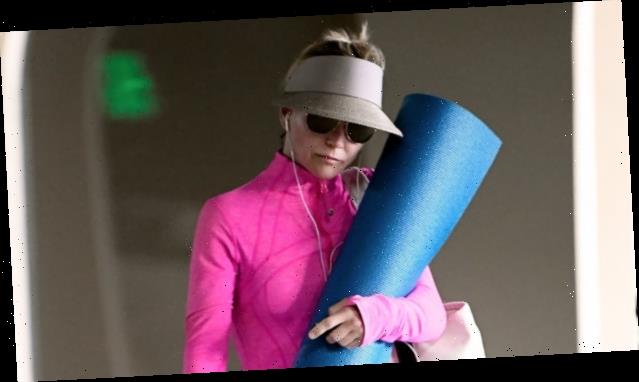 Lori Loughlin has definitely had a life-changing few months. After it was discovered that she was involved in a major college admissions scandal (reminder: she and her husband allegedly paid $500,000 to have their daughters designated as recruits to the University of Southern California's crew team), she was fired from her acting jobs, has been in and out of court, and is currently facing jail time. However, one thing in Loughlin's life has remained the same, and that's her workout outfit. The star has frequently been spotted heading in and out of yoga wearing the same quirky combination.

To be clear, we're not saying that Loughlin has worn her pink zip-up, blue leggings, pink Birkenstock sandals, and wide-brim visor twice or even three times. She's been rocking it for months, and each time we think she might change it up, the paparazzi spot her again, wearing the exact same thing.

After all this time, we're left searching for a deeper meaning. Did she buy these pieces in bulk? Did she adopt a minimalist lifestyle after the news broke? (After all, she underwent a style transformation when it came to her court appearances.) Is Loughlin using the age-old, Princess Diana-approved method of wearing the same thing over and over again so that people lose interest (since we've seen the look before)?

If it's that last option, Loughlin might want think about trading her gear for something more inconspicuous, because those bright colors are striking every time we spot them.

The star seems to really love this workout combination. She's been wearing it on repeat — for months! We're unsure why.

Just to be clear, these are all different days. Is it possible that Loughlin owns multiples of these staples? (This pair of leggings does look slightly shorter than the others.) Or is she just really on top of doing laundry?

The story behind the bright combination remains a mystery. Of course, we'll continue to be on the lookout for its next big appearance.