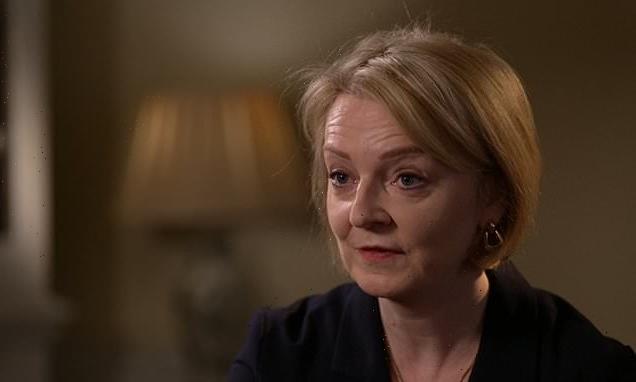 Liz Truss is doing the right thing. If she backs down now, it’s an admission no meaningful reform can ever be undertaken, writes Conservative peer LORD HANNAN

What Liz Truss is doing is brave and right, however unpopular it may be in the short term. She has inherited an economy that is bloated, sluggish, over-taxed and over-regulated. She has to get it growing again.

Doing so means taking on the corporatist consensus: the BBC, the International Monetary Fund, the former governor of the Bank of England Mark Carney, the Biden administration, the Financial Times and all those hoary-headed experts who struggle to imagine an alternative to the ‘high tax, low interest rates’ model that has prevailed since the 2008 financial crisis.

But not doing so would condemn Britain to poverty and ruin.

Yesterday, the Prime Minister spoke of her readiness to take ‘controversial and difficult decisions’ in order to get our economy moving. 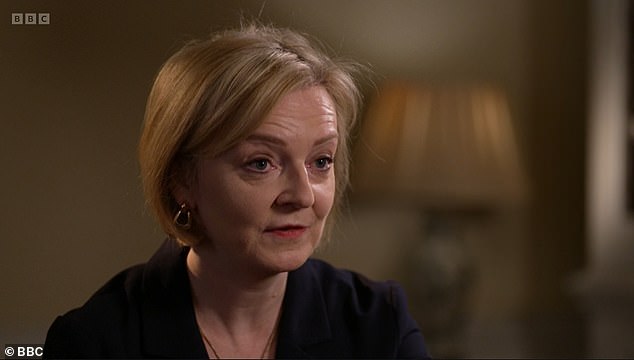 What Liz Truss is doing is brave and right, however unpopular it may be in the short term

She was echoing Margaret Thatcher, whose style she often copies. In 1981, the Iron Lady ran into precisely the same criticisms from precisely the same kinds of people when she, too, stepped outside the old consensus, proposing a Budget that slashed regulations and ended controls.

Respectable commentators told Thatcher to listen to the experts. Those Tory MPs who had voted for her rival smirked at one another knowingly, and 364 economists wrote a letter warning of disaster.

Yet, in retrospect, we can see that this was the moment when Britain reversed its decline and became, for a while, the most successful economy in the developed world.

To see why last week’s fiscal statement was necessary, consider this question: what would have happened had there been no mini-Budget?

The first and most immediate consequence would have been that many businesses would have gone under, unable to pay their energy bills.

I don’t like price freezes — it is a basic Conservative principle that it’s better to target support at those who need it rather than to fix the market — but, given the immediacy of the energy crisis, doing something crude and effective was better than doing nothing.

That intervention, which could in theory cost up to £200 billion (though, if global energy prices continue to fall, it will be a fraction of that sum) comes on top of the more than £400 billion dropped on the pandemic. Neither Britain nor any other country can wish those costs away. If you pay people to stay at home for the better part of two years, there is bound to be a painful crash back to Earth. 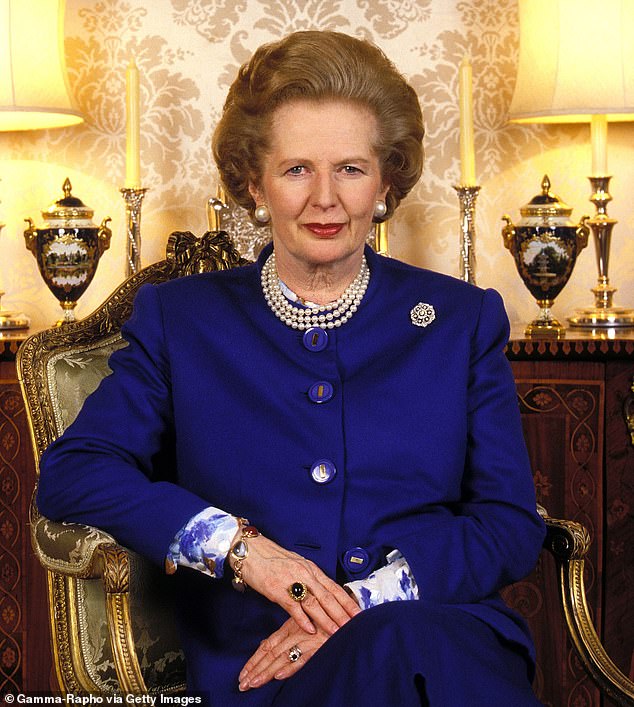 Yesterday, the Prime Minister spoke of her readiness to take ‘controversial and difficult decisions’ in order to get our economy moving. She was echoing Margaret Thatcher(pictured), whose style she often copies

You can try to keep the party going for a little bit longer, of course. You can carry on with money-printing and zero interest rates, creating the illusion of growth. But that is like trying to stave off a hangover by having another drink. It might work for a bit, but it makes the eventual reckoning worse.

Instead, the PM and her Chancellor, Kwasi Kwarteng — whose doctoral thesis was on the Great Recoinage of 1696, when William III’s government sought to restore value to a debased silver currency — intend to get back to sustainable growth.

With the exception of the energy price cap, every line of Friday’s statement was about making the country better off.

There will be fracking and more wind energy. People who have dropped out of the labour market will be shifted off benefits and back into work. More infrastructure will be built, and more surplus Government land will be made available for housing.

New investment zones will allow things to happen much more quickly. Targeted tax cuts are an important part of this package.

The less people pay to the Government, the more they can spend on other things — which matters when prices are high.

Though it has received little attention, the scrapping of reforms to the IR35 — a device introduced by Gordon Brown, supposedly to stop employees pretending to be contractors, which, in reality, has mired self-employed people in needless and expensive paperwork — will in itself do a great deal to stimulate the economy.

The best tax cuts are those which make people better off while costing the Government little in lost revenue. The IR35 changes are in this category. So is the return to the 40p top rate of tax, which pertained to all but the final month of the Blair/Brown years.

Gordon Brown hiked the rate as he left office, rather like how the retreating Russians in Ukraine booby-trapped their abandoned positions. He knew it would bring in almost no extra cash, but that scrapping it would open his successors up to the charge of being on the side of the rich.

He was right. While the additional rate was reduced from 50 per cent to 45 per cent in 2013, the fact that it never went back to 40 per cent was a symbol of the unwillingness of successive Tory leaders to put long-term prosperity before short-term popularity.

Truss’s decision to return to Labour’s top rate will cost the Treasury little or nothing. More rich people will choose to pay their taxes in the UK, offsetting any shortfall. Flatter, simpler taxes are almost as important to prosperity as lower taxes. 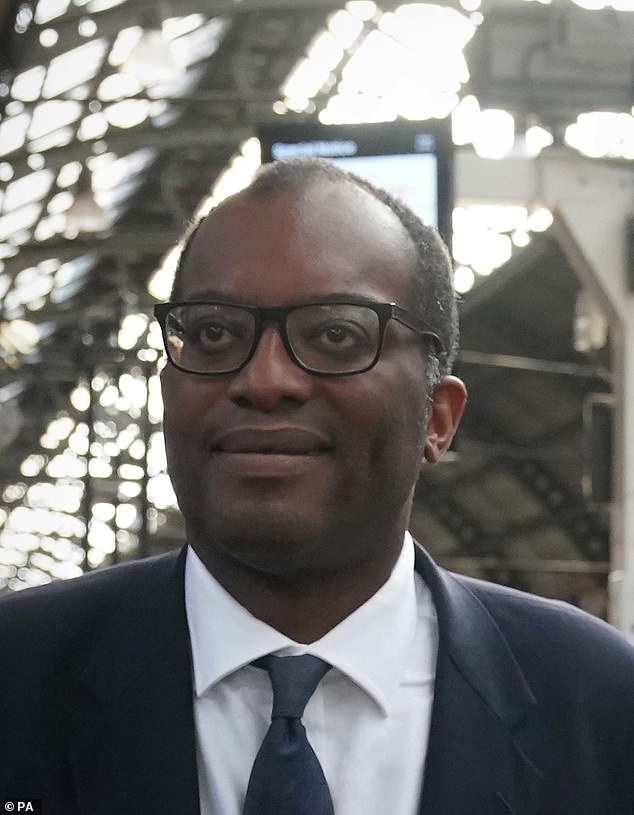 The PM and her Chancellor, Kwasi Kwarteng (pictured) intend to get back to sustainable growth

More than this, though, scrapping the additional rate is a sign that the PM is prepared to put up with bad headlines in pursuit of economic growth.

Why, then, has the IMF condemned the move, urging Truss to ‘re-evaluate the tax measures, especially those that benefit high-income earners’? Since when was that body, established in 1944 to promote global currency stability and economic growth, interested in redistribution?

The answer is that few institutions — and even fewer global bureaucracies — are immune to intellectual fashions.

The current trend is to insist that any change in tax policy should be primarily designed to help the poor.

That assumption is flawed. The best way to help the poor is through targeted benefits, not through general tax policy.

Indeed, if you measure changes to the tax system purely by how much people pay the Government, you will always find that cuts benefit the people who pay most tax in the first place. If your sole test is redistribution, you will never cut any taxes.

But that is not what the current tax cuts are about. They will stimulate the economy as a whole, leading, over time, to more and better-paid jobs — and so, in the longer term, to higher Government revenue.

They are, ironically, what the Left-wing think-tank, the Institute for Public Policy Research, called for last week — namely a ‘whole-Government approach to growth’.

Plenty of grandees were part of the old consensus, which saw central banks contrive to act as cash machines for high-spending governments. Not surprisingly, they are unimpressed.

Biden’s officials are warning against tax cuts, Carney is telling the PM to listen to the experts, The Economist’s latest front cover shows Truss and Kwarteng in a sinking boat.

What, though, is their alternative? To carry on as we were? We created more money in 2020 than in the whole of the previous decade. Any notion that this was sustainable was blown away by the invasion of Ukraine and the consequent spike in prices.

Coming off a drug is bound to involve some cold turkey and Britain, having acted earlier, will experience it sooner than the rest of Europe.

But, crucially, we are doing the right thing, focusing on increasing the size of the economy rather than fretting over how to share the pie.

Backing down now would signal to everyone that Britain is, after all, ruled by opinion polls, and that, since all change involves some controversy, no meaningful reforms will be undertaken.

But staying the course will mean an end to the ghost-growth we have seen for much of this century, and the beginning of sustainable prosperity.

Perhaps voters will be unconvinced. Perhaps our lips are so firmly champed around the teat of public spending that nothing can wean us off.

Perhaps there is not enough time to turn things around before the next election. But we must at least try.

Daniel Hannan is a Conservative peer and a visiting professor at the University of Buckingham.