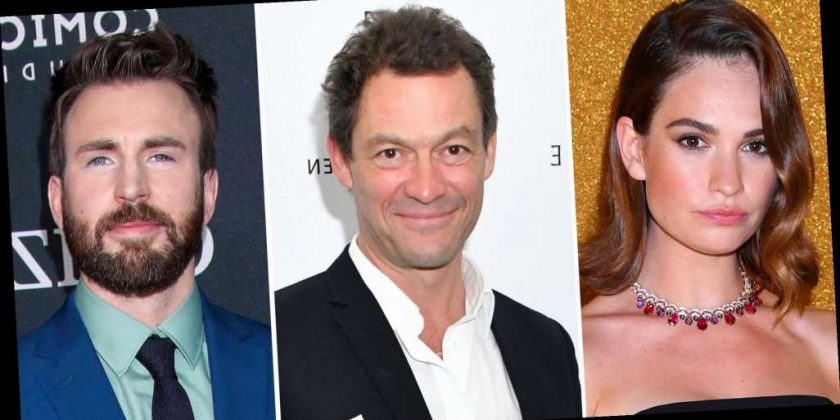 No more Chris Evans? Lily James was spotted getting cozy with Dominic West, who is married to Catherine FitzGerald, in Rome on Sunday, October 11.

The Mamma Mia! Here We Go Again star, 31, and the Affair alum, 50, went for a ride on an electric scooter around the Spanish Steps and Piazza di Pietra in photos published by the Daily Mail. She steered the scooter as he wrapped his arms around her waist from behind.

The pair, who costar in the upcoming BBC One miniseries The Pursuit of Love, later had lunch with their manager, Angharad Wood, at a nearby restaurant, where West was photographed kissing James and affectionately stroking her hair. He wore a lavender button-down shirt with black jeans, while she sported a black floral dress. He did not have his wedding ring on.

The newspaper reported that the stars spent two nights in a suite at the five-star Hotel de la Ville, which has a panoramic view of the Italian city and is within walking distance from the Spanish Steps.

West has been married to FitzGerald, 49, since June 2010. They share four children: Martha, 22, Dora, 14, Senan, 12, and Francis, 11. The couple have not publicly addressed whether they are separated.

James, for her part, was recently linked to Evans, 39, with whom she was first spotted in London. After spending the 4th of July together, the movie stars got cozy and ate ice cream together at a park on July 8.

However, in the Cinderella star’s Harper’s Bazaar U.K. November 2020 cover story, the magazine noted that she “won’t discuss whether or not she is dating” the Captain America actor.

“Don’t be obsessed by boys!” she said during the interview. “Hang out with your girl mates. And don’t take everything so seriously — be kind to yourself.”

James previously dated her Pride and Prejudice and Zombies costar Matt Smith. They started seeing each other in 2014 and sparked breakup rumors in December 2019 after they were seen having a tense lunch. She and the Crown alum, 37, briefly reunited in March while going for a walk in London.

Us Weekly has reached out to reps for James and West for comment.