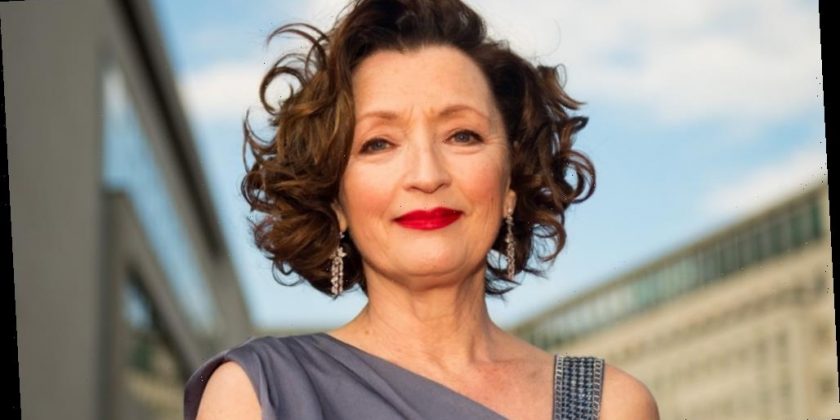 EXCLUSIVE: Lesley Manville’s secret is out. She’s had to keep quiet about playing Princess Margaret in The Crown for nearly a year, not even telling some of her closest friends. But after Netflix announced the news on Thursday, Manville is positively bubbling with pent-up excitement.

“It’s mind-blowing television,” she tells Deadline in her only interview after being unveiled as next in line to play Queen Elizabeth II’s sister. The Oscar-nominated actress binge-watched The Crown on her free days while filming in Belfast, Northern Ireland, a couple of years ago, and considered the show “my treat.” But the thought of starring in the Left Bank Pictures series, or playing Princess Margaret, did not cross her mind until last year.

The Oscar-nominated actress was approached by The Crown showrunner Peter Morgan and, during a meeting at the writer’s home, she was offered the role in the room. “There was never any doubt that I would say yes,” she remembers. “When they said ‘Margaret,’ I hadn’t really thought about it. Then I thought, yes Margaret! That’s fabulous because she was so avant-garde. So naughty, delightful and funny. What a wonderful woman to play.”

Manville will follow in Vanessa Kirby and Helena Bonham Carter’s footsteps, taking on the role for what will be The Crown’s fifth and final season. She lavishes praise on the pair, who she says have emboldened her to make the part her own. “I don’t find that daunting, I find it thrilling. I think, come on Manville, you’ve got to take that baton, and not let those two actresses think, ‘Oh we were great, shame about Manville.’” Let’s hope it doesn’t come to that,” she laughs.

She is just as animated about her co-star Imelda Staunton, who will topline Season 5 as Her Majesty herself. The pair are old friends and have worked together a number of times, most recently playing pixies in Disney’s Maleficent franchise. “We know how to have a giggle, but we also know how to knuckle down. I feel sort of sisterly towards her for in real-life anyway,” Manville explains. She’s being kept in the dark about other co-stars, however. “Not a single name has been dangled like a carrot to make me even more excited.”

Manville has been unusually busy during the coronavirus lockdown, having performed in the BBC’s Alan Bennett monologues Talking Heads — one of the few shows to have been made in the UK at the height of the pandemic. She’s also been bookish about her research for playing Princess Margaret, reading a stack of biographies on the royal, who died 2002, as well as studying her in archive television footage.

The preparations will be put into action when Season 5 shoots next year, but Manville thinks the role may also require a studied physical transformation. “They’re going to have their work cut out getting me Margaret-ised,” she says. “Off the top of my head, I expect we will need to bulk me out a little bit… We might need to give me a thicker waistline. This great guy made this thing for me [for the play Long Day’s Journey Into Night] and I put it on like a swimsuit. It’s all magic these days. Margaret was in favor of quite big hair, and I’m sure we’ll have the best possible wig makers.”

Manville is about to hit the publicity trail for her new feature Let Him Go, in which she stars alongside Kevin Costner and Diane Lane, while she’s also hoping to complete a film and a TV series before The Crown begins filming. But mostly, Manville is just happy that she doesn’t have to hold on to her year-long secret anymore. “I’m really giddy with the excitement,” she exclaims.