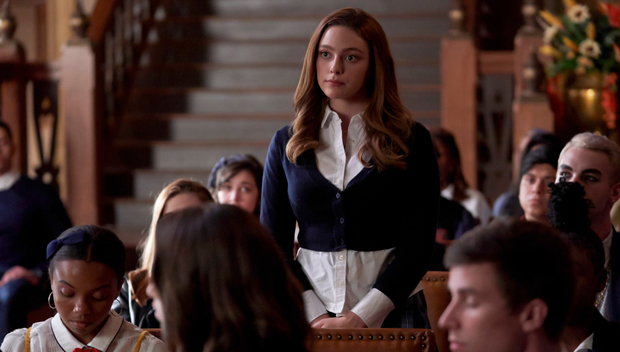 The Salvatore School kids have to head to Mystic Falls on the Nov. 15 episode of ‘Legacies’ in hopes of solving a mystery. Plus, Matt Donovan got a huge dose of deja vu!

Dana and Sasha are missing, and they need to find them ASAP. Matt Donovan shows up to survey the scene and figure out their next steps. He’s been down this road before. Hope and Alaric are continuing to train, and she’s asking questions about Landon. She wants to know if he’s going to stay at the Salvatore School. Alaric’s not going to kick the kid out twice, and he even makes use of him as they search for answers about what happened to Dana and Sasha. MG, Hope, Lizzie, Landon, and Caleb head to Mystic Falls High.

Landon tries to make small talk with Hope, but she is not having it. While Landon didn’t have the easiest time at the high school, Hope fits right in. After a little bit of investigating, she starts to think Connor may have hurt Dana and Sasha. Meanwhile, Matt and Alaric find Dana’s car and her body. They think she’s dead, but she’s not! The kids see her walking out of the woods. She’s transitioning. Getting major Vicki vibes here.

The group comes to the conclusion that they have to turn Dana. Hope wakes her up, and Dana begins to get sick. She literally starts puking her guts out. Connor follows Landon throughout the school. When Landon throws a punch Connor’s way, he realizes that Connor is some type of creature. An arachnid, actually.

Back at the Salvatore School, Josie and Rafael bond. He starts to get picked on by a group of kids, and they beat him up. Josie comes in with the save, but Rafael pushes her away. She doesn’t give up and calms him down. Rafael and Josie find Sasha wrapped in what looks like a spider’s web. They get stuck in the web, too. Josie kisses Rafael to siphon his wolf’s power. The arachnid comes in looking for trouble, and the Saltzman sisters and Hope unite to kill the monster.

Dana is dead, and now the kids have to figure out what to do with Sasha. Lizzie wants MG to wipe her entire memory, but Hope doesn’t think that’s the right think to do. Sasha deserves to grieve Dana.

At the end of the episode, Rafael stands up to the guys at school, and Hope finally talks to Landon. She admits it’s going to take time before he can be trusted. He tells Hope that he has no idea why he was drawn to the knife. He has no explanation for it. Josie and Lizzie talk to Alaric about learning offensive magic. He can’t protect them from everything, so they need to learn how to protect themselves. After Alaric takes care of Caleb, who’s been feeding off a bunch of cheerleaders, Matt gives him a warning. If the kids at the Salvatore School are a threat, he’s coming for them. Alaric claps back that he if comes for his kids, there will be hell to pay.