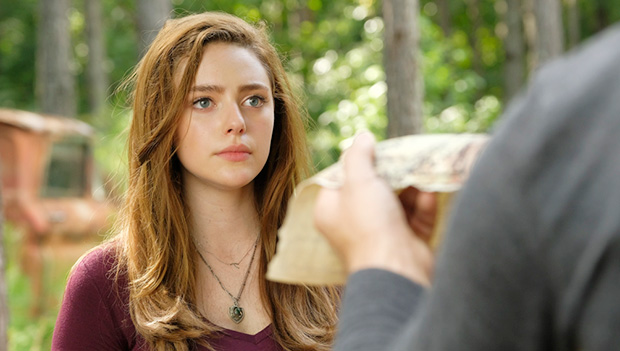 The Dec. 13 fall finale of ‘Legacies’ was full of so many feels. A trip inside the Necromancer’s mind caused Hope to face her fears and get closure regarding her father’s death and his fate.

Every year, the students at the Salvatore School write a letter to lost loved ones. Hope knows a thing or two about death. It’s always knocking on her door. Rafael gets a huge blast from the past when CASSIE shows up at the school. Yes, dead Cassie.

Meanwhile, Alaric is trying to kill the Necromancer while simultaneously getting answers out of him. Alaric wants Hope to stay away from the Necromancer. Hope is the one to tell Alaric about Cassie, so he’s forced to step away from his interrogation. Hope and Dorian keep trying to find answers. Hope admits that she’s worried about Alaric in the wake of Jo’s return and second death. They both agree that Alaric needs a break.

When Hope crosses paths with the Necromancer, he says that she has the “powerful scent of death” on her. Well, that’s rude. She wants to know who is pulling the strings and why he wants the knife. He needs to get his hands on the knife and return it to Malivore. Once he does that, he’s free. He offers Hope a trip through his subconscious for answers.

The Necromancer knows just how to get to Hope. He knows that she wants to know if Klaus is at peace or not. The first stop in their journey is none other than Rousseau’s. Hope finds the door to the Necromancer’s subconscious, and she ends up completely and utterly alone. Hope begs the Necromancer to tell her whether or not Klaus is alone. When she comes out of the Necromancer’s subconscious, Alaric is there waiting. He’s furious that Hope went behind his back. During a nasty fight, Hope accuses Alaric of having a drinking problem (possibly accurate), and Hope snaps back that he is not her father. She *technically* doesn’t have to listen to him.

Rafael and Cassie try to come to terms with her death. Alaric advises Rafael to use this extra time wisely. If he doesn’t make peace with Cassie, he could be haunted forever. After some soul-searching, Rafael admits that the wreck that killed Cassie wasn’t caused by the storm. “It was me,” he tells Alaric. “I killed her.” Cassie forgives Rafael, and they make peace.

The Necromancer reveals that the knife that everyone wants to get their hands on is one of the locks that opens Malivore. He locked her in his subconscious so he could get his hands on the knife, thanks to Cassie. A Bennett witch ghost transported the knife to Malivore. Since the Necromancer held up his end of the deal, he’s free. Before he goes, he tells Hope that Klaus watches over her every day. Klaus doesn’t regret his choice to die, but he’s not going to be able to find peace until Hope does.

Also during the episode, MG loses control after listening to Caleb about feeding on humans. Dorian has to step in and pull MG back from the brink. Dorian tells off Caleb and admits that his father and sister were killed by ripper Stefan. He doesn’t want to see MG spiral out of control and head in that direction.

Hope writes a letter to her dad, yet another step in her getting closure. This is cathartic for her and allows her to express what she’s feeling, which is what she needs to do right now. In the final moments of the episode, Hope gets the signal that Landon’s in trouble. Someone is looking for him and has that same exact photo of Landon and his mom, whose name is Seylah!