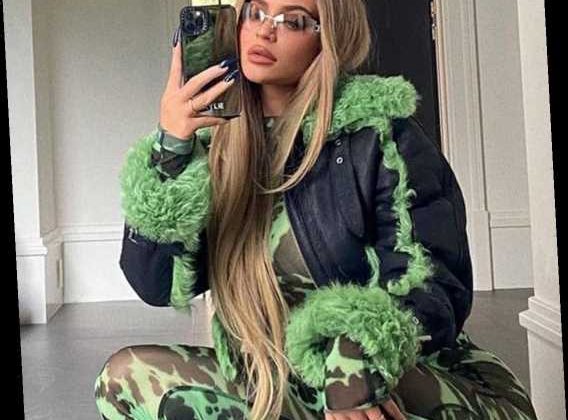 Get your holiday wish lists ready, because Kylie Jenner just revealed her Kylie Cosmetics Christmas collab and it will definitely make your heart grow three sizes.

First the Grinch stole Christmas, and now he's taking all our money. In what must be the meanest collab we've ever seen, Kylie Jenner is partnering with the Grinch for her fifth annual Kylie Cosmetics holiday collection.

The mogul shared all the new Dr. Seuss products on her Instagram story on Friday, Nov. 13, and even wore a fuzzy green glove to get into character while unboxing. Dropping on Nov. 19, the festive products include a lipstick set, lipkit, eyeshadow palette, shadow stick set, highlighter, blush and olive green kyliner.

The 23-year-old star teased on Insta that she's "probably the most excited about this one than i've ever been." She added on Twitter, "it's the best collection yet."

Obviously, the bundle came with ribbons, and it came with packages, boxes and bags. But most of all, it came with cute Grinch graphics and the punniest names that took us back to watching Jim Carrey in the 2000 live-action film.

Kylie's pressed shadow palette features several purple tones mixed with silver and green glitter, with names like Dah Who Doraze, Last Can of Who-Hash, Ur a Mean One, Jing-Jinglers, Who-Pudding and Heart 2 Sizes 2 Small.

The two shimmer eye glazes are named Stealing Christmas (gold) and Lil Grinch (mint green). And her warm lipstick shades range from red and brown to jam and tan—they're called A Wonderful Awful Idea, Oh the Noise, Who Needs Presents, I Hate Christmas, Mean One and Mr. Grinch.

Watch Kim Kardashian's Tearful Reaction to Hologram of Her Dad

Though she's a total beauty boss, Kylie has faced Grinches in her own life. She recently revealed that she feels like she's always playing a persona of herself to avoid online bullies.

"I showed my true personality for so long ago on Vine and Instagram," she said last month. "When people used to say really mean things about how I really am, my personality and what I love the most about myself, it would hurt me more than almost playing a character."

Kylie added, "So I just started doing a little less, which is sad. It makes me sad."

However, her grit and business smarts are paying off—she was able to sell a $600 million majority stake of Kylie Cosmetics to the Coty beauty brand last year. Talk about a glow up!

As for this holiday season, it looks like the Grinch's heart will grow three sizes, and so will our makeup collections.