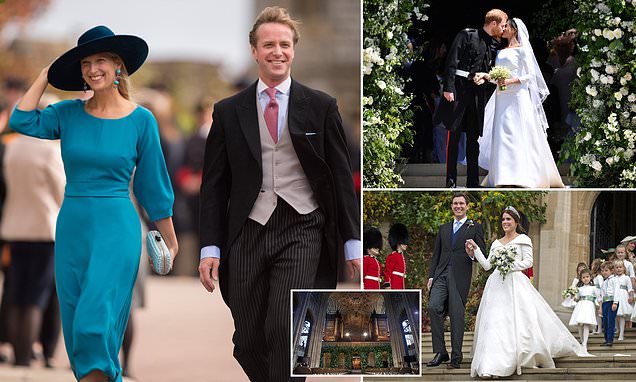 St George’s Chapel will host its third royal wedding in a year when Lady Gabriella Windsor, daughter of the Queen’s first cousin, Prince Michael of Kent, walks down the aisle this spring.

Following on from the May nuptials of the Duke and Duchess of Sussex and October’s marriage of Princess Eugenie to Jack Brooksbank, ‘Ella’, as she is known to her friends, has chosen the Queen’s favourite chapel as the venue for her wedding to fiancé Tom Kingstone.

Unlike the other two events, Lady Gabriella’s private wedding will be far more low key, unsurprising as she is only 50th in line to the throne.

Still, several senior members of the Royal Family are expected to attend and there is nothing the nation loves more than a wedding, particularly a royal wedding. 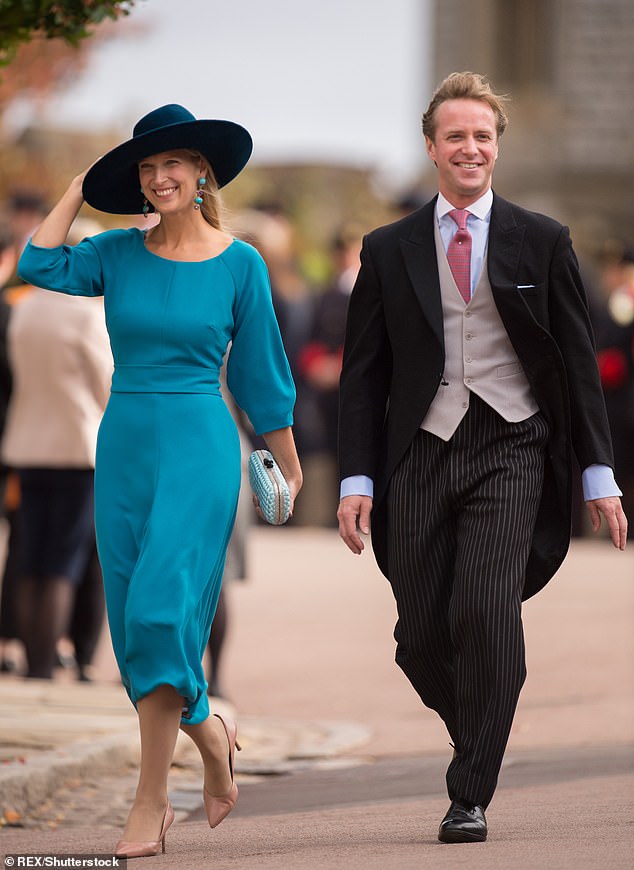 Wedding bells! Lady Gabriella Windsor has chosen St. George’s Chapel Windsor as the venue for her wedding to fiancé Tom Kingston next spring (pictured at the same venue for Princess Eugenie’s nuptials with Jack Brooksbank on 12 October 2018) 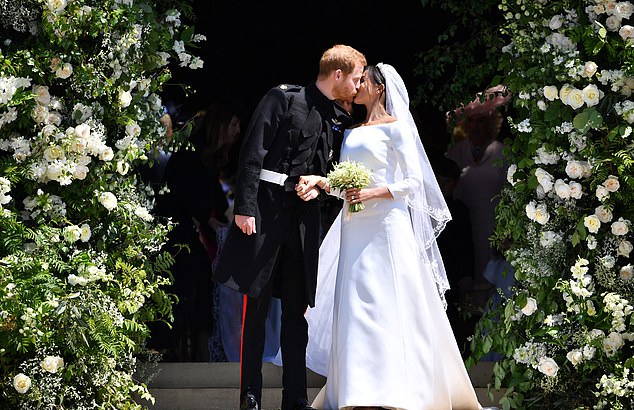 The Duke and Duchess of Sussex, who are currently expecting their first child, also picked St. George’s Chapel Windsor for their wedding (pictured on the steps of the chapel on 19 May) 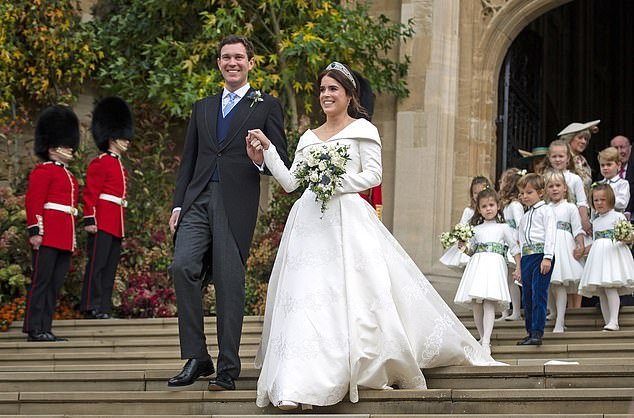 It is understood that St George’s Chapel was chosen by the couple as Gabriella, 37, has a particular affiliation with the royal residence.

Friends say she has fond memories of childhood Christmases at Windsor, before the Queen moved her festivities to Sandringham, and she was also a bridesmaid for her first cousin, Lady Helen Taylor, there.

Like Harry and Meghan, Lady Gabriella will hold her reception at Frogmore House (although there will be no pre-drinks at the castle).

The event will be paid for privately by Prince Michael of Kent and his wife, Princess Michael.

Buckingham Palace have not yet confirmed a date for the wedding or whether the Queen will attend, although it is likely that the Kents would have sought permission from the Queen for their daughter to marry in her chapel.

A friend said: ‘Lady Gabriella has a real personal connection with St George’s, it is a place she loves.’ 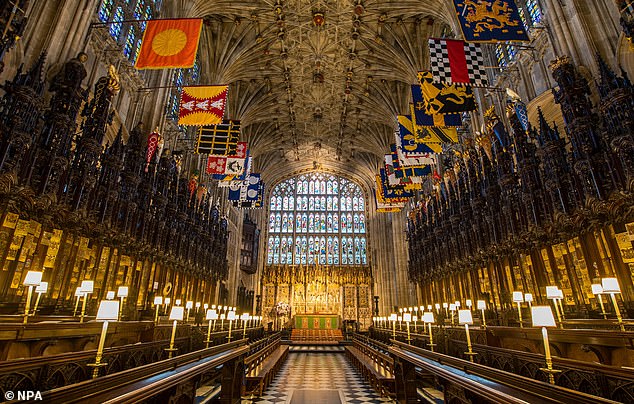 A view of the Quire in St George’s Chapel at Windsor Castle, where Lady Gabriella Windsor and Tom Kingston will have their wedding service next spring, it emerged this week

Intriguingly, Mr Kingston, once described as one of the most eligible men in London, is said to have dated an ex of Prince William, Natalie Hicks-Loebbecke.

He is also good friends with Pippa Middleton and he and Gabriella attended her wedding to James Middleton last year. It is anticipated that the invitation will be reciprocated.

A student of economic history at Bristol University, he started his career at the Diplomatic Missions Unit of Foreign Office, which involved moving to Baghdad in 2003 to work as a project manager for the International Centre for Reconciliation. 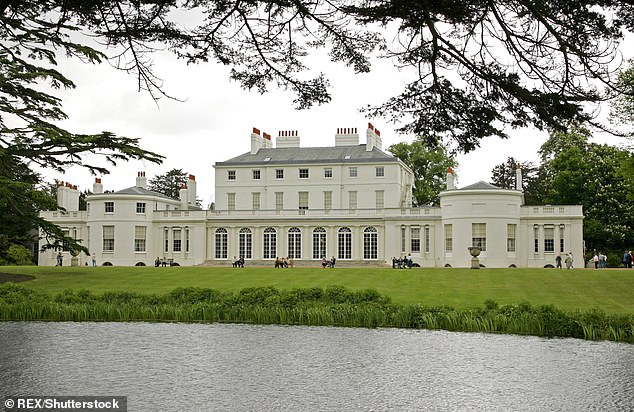 Like Harry and Meghan, and Peter and Autumn Phillips before them, Lady Gabriella will hold her reception at Frogmore House, pictured (although there will be no pre-drinks at the castle)

Like Lady Gabriella, the Duke and Duchess of Sussex also held their wedding reception at Frogmore House in May (pictured leaving Windsor Castle on their way to their evening soirée on May 19)

The organisation was tasked with mediating in disputes between Iraq’s political, religious and tribal leaders and which negotiated the release of foreign and Iraqi hostages.

He now works in ‘frontier market investment’ and is a director of equity company Devonport Capital.

He and Ella, who does not carry out any official royal engagements, have been dating for around three years. According to Buckingham Palace, they got engaged in August, with Tom proposing on the island of Sark.

Ella, 37, is the daughter of the Queen’s first cousin, Prince Michael, who lives with his wife, Princess Michael – sometimes dubbed Princess Pushy for her imperious ways – at Kensington Palace. 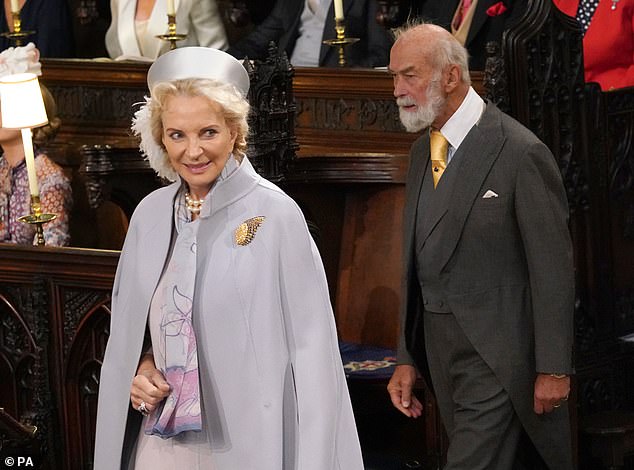 Ella, 37, is the daughter of the Queen’s first cousin, Prince Michael, who lives with his wife, Princess Michael (the couple are pictured here at the wedding of Princess Eugenie and Jack Brooksbank at St. George’s Chapel, Windsor on 12 October 2018)

They do not receive any official funding and now pay rent for what was once a grace-and favour royal apartment, leading them to complain that they would go ‘anywhere for a hot meal’.

Ella, who studied at Brown University in the US as well as Oxford, and her brother Lord Freddie Windsor, have both had to work for living.

She is a Senior Director at Branding Latin America, a brand-positioning platform that specialises in the region, as well working as a writer, contributing to The London Magazine.

A statement released by Buckingham Palace earlier this year said: ‘Prince and Princess Michael of Kent are delighted to announce the engagement of their daughter Lady Gabriella Windsor to Mr Thomas Kingston.

‘The engagement took place in August; Mr Kingston proposed on the Isle of Sark.

‘It is anticipated that the wedding will take place in the spring of 2019.’