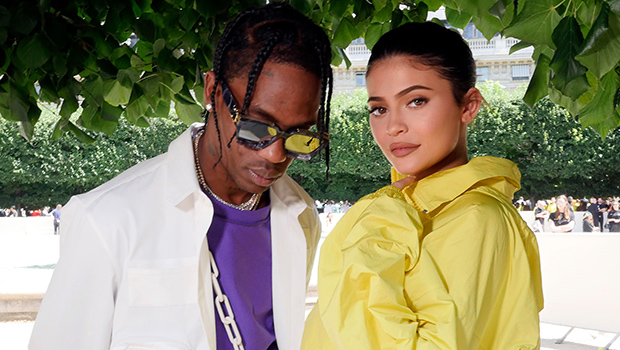 Kylie Jenner is spoiling Travis Scott with his favorite peanut butter and jelly sandwiches and more, while on tour with him — HL has learned she’s ‘loving every minute’ of playing ‘wifey’ for him!

“Even though it’s always pretty hectic on tour, Kylie [Jenner] and Travis [Scott] have managed to get into their own kind of routine, which is really important as they have Stormi with them. Kylie is actually shocked at how well Stormi has adjusted to being on the road — she’s sleeping really well and she seems to be really loving all the traveling. And she’s not the only one! Kylie is enjoying being on tour a lot more than she thought she would, and she’s getting a kick out of playing ‘wifey’ to Travis,” a source close to Kylie, 21, tells HollywoodLife EXCLUSIVELY.

Not only has Kylie been “loving” being on tour with Travis, 26 — he’s currently traveling the country and promoting his highly-successful Astroworld album — but they even squeeze in dates nights from time to time. For example, they recently enjoyed one in Miami! Kylie wore a sexy coat dress that showed off her legs and shoulders, while Travis wore a jean outfit and an Astroworld hat from his tour merch. They looked adorable!

And when at home — and by home we mean where they’re staying when they stop in different cities — Kylie cooks for Travis! “They have their own chef who prepares all their meals for them, but Kylie’s been really enjoying dabbling in the kitchen too, whipping up her famous peanut butter and jelly sandwiches for Travis, as that’s his favorite thing that she makes,” our source adds. “By the time Travis finishes performing, Kylie has already gotten Stormi settled down for the night, and after Travis gives the baby a goodnight kiss, he and Kylie always make sure they have some special one-on-one time together, during which they unwind, talk about the day, and just chill out. Kylie is loving every minute of being on the road with Travis, and it’s reciprocal — Travis says this is the most enjoyable tour he’s ever embarked on, and he says it’s because his two favorite ladies are right there with him.”

Tonight (Nov. 17), Travis performs in Houston, Texas, so we hope they take advantage of being there and eat some of the state’s delicious food! Maybe Kylie can take a night off from cooking this time around.