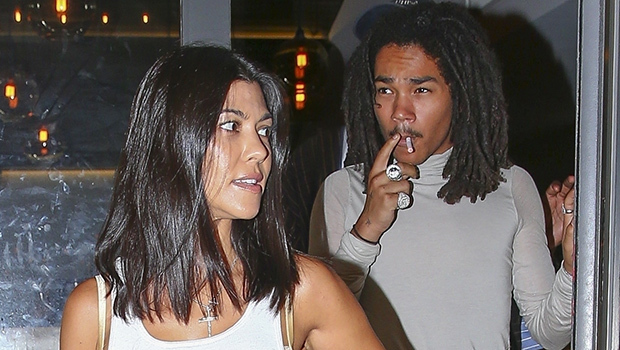 Keeping up with Kourtney Kardashian’s love life has been a challenge lately. She’s back on again with 20-year-old model Luka Sabbat and we’ve got details why she’s more interested in him than ever.

Kourtney Kardashian sure got tongues wagging when she started dating 20-year-old boy toy Luka Sabbat in September. Things seemed to be going swimmingly for the 39-year-old mother of three and the much younger model, who seemed to share a love of shopping and dinner dates. Then on Oct. 27 Luka was photographed holding hands and kissing another woman, which ended up actgually being a major turn-on for the reality star. “Kourtney’s seeing Luka again and she’s more into him than before because he started playing harder to get,” a source close to Kourt tells HollywoodLife.com EXCLUSIVELY.

“They were never exclusive but Luka wanted to be and that actually really stressed Kourtney out. She pushed him away and he started hanging with other girls and that made her more interested in him again,” our insider explains. After Luka’s outing with the mystery woman things seemed to cool down between him and Kourtney. But they’ve reconnected, hitting up Diddy‘s 49th birthday party together on Nov. 4, even color-coordinating in all-black outfits.

“Kourtney has turned into a total player, her sisters think she’s avoiding any kind of real relationship because she doesn’t want to get her heart hurt again. But Kourtney says it’s a lot simpler than that and she just wants to have fun while she still can. She likes Luka and likes having fun with him. But it is not exclusive and that’s fully her choice,” our source adds.

Kourtney was in a committed 15 month relationship with Algerian model Younes Bendjima, 25, that ended in August. Things soured in July after he shamed her on social media, accusing her of posting an Instagram pic in a butt baring thong to get likes. Within a few weeks he was banished forever from Kardashian land and Kourt took up with the even younger model a few weeks later. But Kourtney really is playing the field as even though she went to Diddy’s party at Ysabel in West Hollywood, CA with Luka, she was spotted flirting with and twerking on sister Khloe‘s ex French Montana during the bash! She really is a player these days.