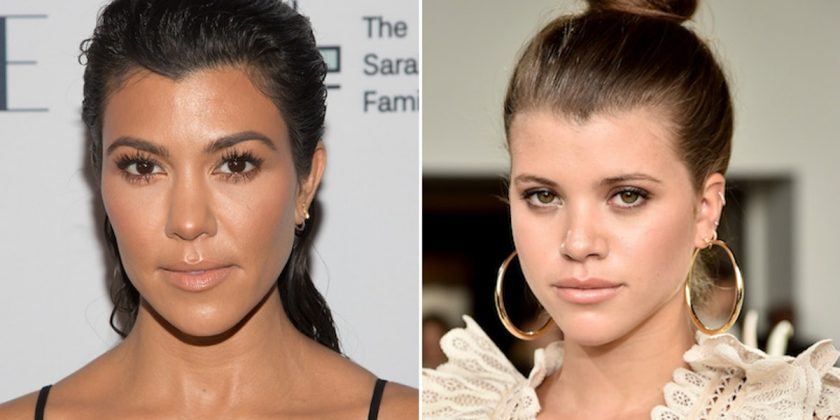 Well, this is awkward. It was a large enough adjustment for fans when Scott Disick started dating Sofia Richie, then 19, after having three children with his ex-girlfriend Kourtney Kardashian, 39. Now, fans are noticing the two women might have tendencies to look the same and it’s a little disorienting. Specifically, Khloé Kardashian just posted a photo of herself and Kourt that is making people do a double take. According to fans, Kourtney Kardashian looks like Sofia Richie in Khloe’s photo in a bike shop and it’s pretty confusing to take in. Real talk.

The photo in question popped up on Sunday, Nov. 25. Khloé and Kourt were apparently in a bike shop looking for some new wheels when Khloé seized the opportunity for a photo-op. Both women were rocking some serious neon spandex, shades, and high top sneaks which just begged for a pic. Due to forces outside of my realm of understanding like physics, technology, or IDK what, Kourtney really did weirdly morph into a Sofia lookalike. They’re both naturally of petite stature already, and thanks to extreme lighting, Kourt’s usually dark hair gave off a blonde-like glare in the photo. The sunglasses hiding her signature Kardashian eyes might have something to do with the illusion, too.

Khloé, however, thought they were giving off Power Ranger vibes instead of Sofia Richie vibes. She captioned the picture, "Power Rangers unite!! My BFF!!!"

Of course, the picture garnered the usual fire emojis and "yasss" comments, but people immediately noticed Kourt’s resemblance to Richie. Some people asked Khloé why she would call Sofia her BFF and others simply commented on how stunned they were at first glance. One person innocently asked, "So kourt went blonde?"

Actually, even if Khloé was hanging out with Richie, it seems like that would be just fine, too. Plenty of reports have come out saying that Kourtney is actually chill with Richie and Disick dating. In fact, Kourtney was spotted out with the duo herself in mid-November.

According to Entertainment Tonight, Kourtney and her sisters had dinner with Disick and Richie after attending ArtLife’s VIP preview for the Street Dreams gallery exhibit in West Hollywood. Sarah Moore (also known as @SarahMOnline) told ET she saw them at a restaurant called Craig’s. “They all sat at a table in front and Kourtney and Sofia were talking and laughing a lot. Everyone was talking and having a good time,” Moore said. "Scott wasn’t showing any affection to Sofia at the table — no hand holding or arm around her or anything."

In May 2018, a source told People magazine Kourtney "trusts" Richie with her children, explaining,

Maybe Kourtney and Richie have a lot more in common than we all think and Disick is the only person who sees it. (Get it? ‘Cause they look similar?)